Bangkok: Thailand has detected its first locally transmitted COVID-19 case since late May, snapping a streak of 100 days without community transmission.

The new case on Thursday was confirmed in an inmate of a prison in Bangkok shortly after incarceration. The patient's history showed that he stayed with his family of five and worked as a disc jockey before being lodged in jail, Health Ministry officials said. He had no history of travelling outside the country. 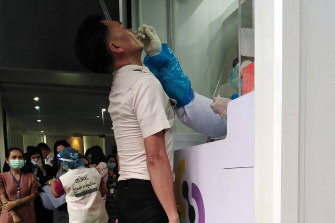 A Bangkok prison worker is tested for coronavirus on Thursday after an inmate was found to be infected.Credit:AP

There was no immediate risk of infections among other inmates because all new prisoners were quarantined for a 14-day period, officials said. Health authorities were carrying out tracing of all high-risk contacts of the patient.

The local transmission suggested that the virus has been spreading undetected within the community for some time, sparking concerns of another outbreak wave. Similar hidden chains of local transmission have also been reported in Vietnam and New Zealand.

"We can't stay at zero cases forever but once we detected the case, we'll act quickly to contain the spread," Suwannachai Wattanayingcharoenchai, director general of the Department of Disease Control at the ministry, said at a briefing. "There's no need to panic. We just need to follow social distancing guidelines. If we're complacent, we'd likely find more cases." 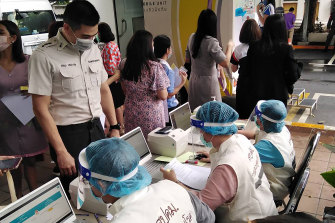 A prison inmate in Thailand has tested positive for the coronavirus in the country’s first confirmed locally transmitted case in 100 days.Credit:AP

The reemergence of the virus may derail Thailand's plans to gradually reopen its popular beaches and cultural sites to foreign visitors from next month. The nation's borders remain closed to most visitors, and almost all who enter are required to go through a 14-day quarantine at state-controlled facilities or hotels.

While the government has gradually lifted most restrictions on businesses and services to revive an economy that's on track for a record contraction of 8.5 per cent this year, the south-east Asian nation has been under the state of emergency since late March. The country has so far reported 3428 cases and 58 fatalities, with only 93 patients still being treated in hospitals.

The government could now tighten some of its control measures to curb the spread within local communities. On Thursday, officials advised operators and customers of bars and clubs and other entertainment venues to follow health guidelines.

"There is a trade-off between health and economy and this case may make the trade-off a bit harder," said Tim Leelahaphan, an economist at Standard Chartered in Bangkok. "But we will need to consider the reentry of foreign tourists at one point because the domestic tourism is weak and not enough to offset the fallout."

Get our Coronavirus Update newsletter for the day’s crucial developments at a glance, the numbers you need to know and what our readers are saying. Sign up to The Sydney Morning Herald’s newsletter here and The Age’s here.