On April 24, Lia Ditton is setting off to do what no other man or woman has ever done before: row a boat 70-ish miles through shark-infested waters from San Francisco to and around the Farallon Islands. No one has rowed to or from these islands since 1898, when the lighthouse keeper and his wife set off for the mainland to get help for their sick son. And no one has ever rowed around them. Ditton hopes to be the first. She aims to complete the trek in 48 hours and land a place in the Guinness World Records.

This is no easy task for even an accomplished rower like Ditton, who at 38 years old has already paddled her way 3,000 nautical miles across the Atlantic Ocean.

“It’s an odd thing, what I’m about to do, because everyone else is afraid of these islands,” Ditton told POPSUGAR. “The islands are slightly mythical. People have died sailing around them. They are right on the edge of the continental shelf, which means fierce wind.”

The Farallon Islands are rocky, volcanic outcroppings that rise like ghosts from the hazy horizon beyond the Golden Gate Bridge. They were known as the “Islands of the Dead” to Native Americans, and sailors often call them “Devil’s Teeth” for their dangerous underwater shoals. Only a handful of scientists live on the islands, which are a national wildlife refuge.

“Just recently, someone asked me if I knew why scientists living on the island have so many surfboards with shark bites on them,” Ditton mused. “What happens is that these scientists drag surfboards covered in wetsuits behind their boats to distract the sharks. The sharks think they are seals and bite them up. That stuck in my mind. Other people’s fear is contagious, like the flu.” 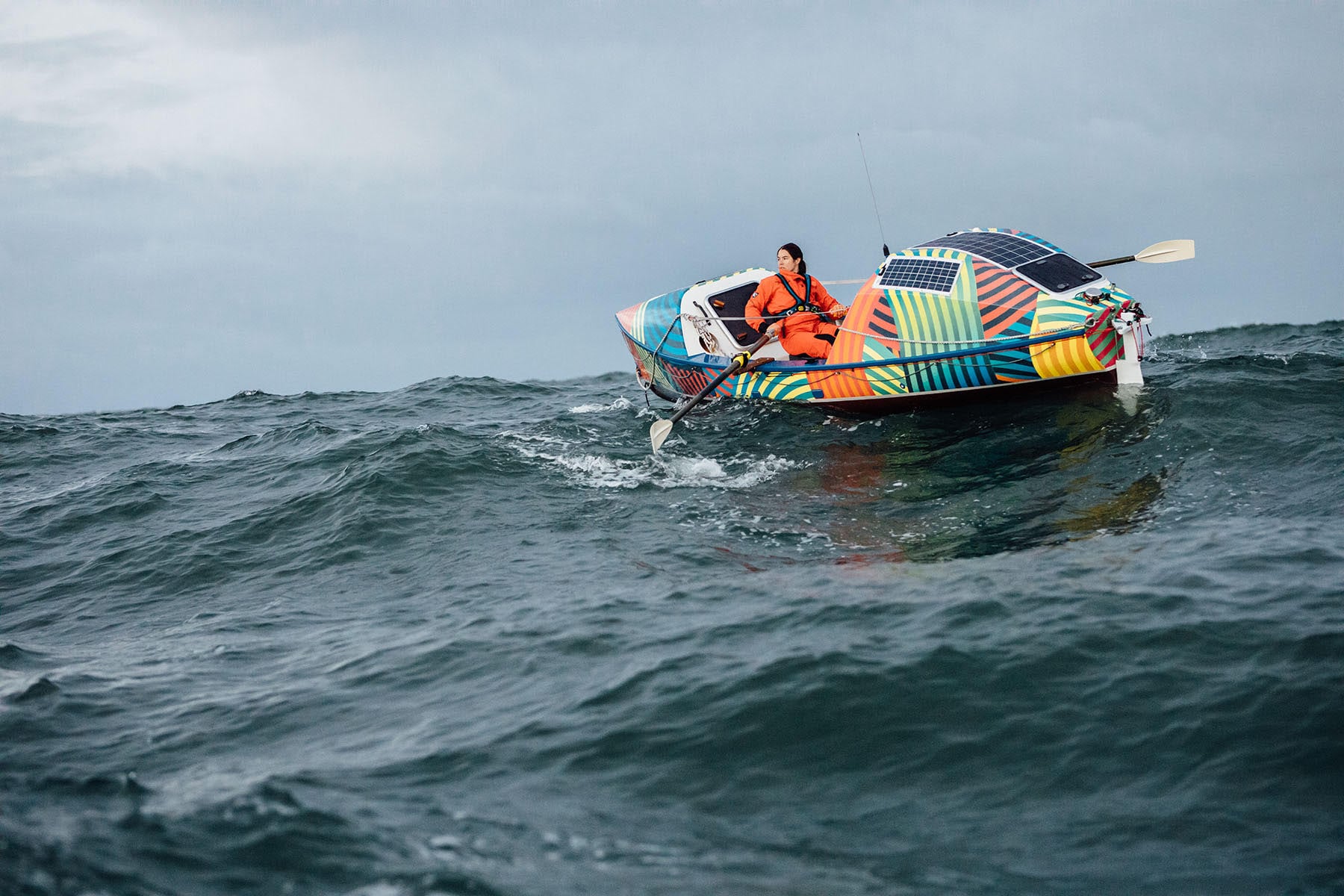 The plan goes like this: Ditton will depart from Tiburon in the wee hours of the morning and then row in three-hour blocks. In between rowing, she’ll try to catch any zzz’s she can by crawling into her little cabin to nap, all while keeping a watchful ear on the shipping lanes.

“It really is the art of letting go. You’re sleeping in a high-traffic area, like a rabbit sleeping on a freeway. It takes some getting used to. You have to let your senses take over — your hearing and sense of touch, especially,” Ditton said. “I’ve gotten to where I can hear a distant motor when I’m lying down in the cabin. I can feel the breeze on my face and know if the wind picked up.”

Ditton said this will be the hardest row she’s ever done, equating it to a game of Snakes and Ladders.

“The first ladder you get is a tide that sweeps you out under the Golden Gate Bridge,” she said. “Then there’s a snake, which is known as the Potato Patch, or a four-fathom shoal that’s lumpy as anything. Then, if you’re lucky, you’ll get a ladder that sweeps you toward Bolinas, which is a northbound tide. Then you make a run for the islands.”

The ocean is not an unfamiliar place for the British-born Ditton, who’s already sailed more than 150,000 miles on the open ocean. She was the first woman and youngest person ever to complete the Ostar 2005 Single-Handed Trans-Atlantic Race. She then placed second in France’s notorious transatlantic race, Le Route du Rhum, and went on to captain the boat from the movie Waterworld, landing in third place in the Transpac Race between Los Angeles and Hawaii.

This run around the Farallon Islands is just a warmup for Ditton, who plans to attempt an even bigger challenge in 2019: row solo and unassisted across the great Pacific Ocean. That’s 5,500 nautical miles — a journey that could take up to six months.

“This is all part of a natural progression and training in San Francisco,” said Ditton. “The first big milestone was rowing around Alcatraz. The real prize is the Farallon Islands. Everyone reveres them. I’m intimidated by them. Each one of my long rows is a confidence builder for the Pacific.”

So why is she doing all this backbreaking rowing? “Well, there are several reasons,” said Ditton. “To inspire and motivate women, in particular. To be the first at anything is unique and special. And to commune with my inner mermaid. The oars are like extensions of my arms. I can feel the texture of the water. I can feel the ocean.”