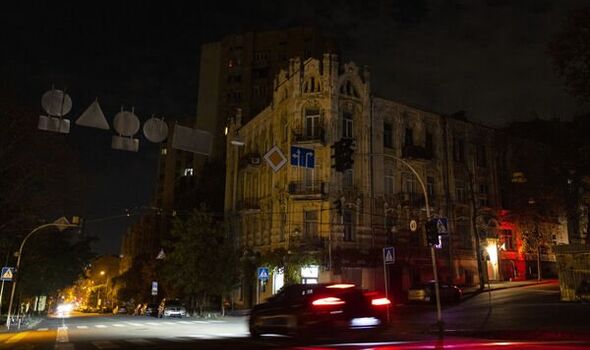 Kyiv officials admitted almost one third of power facilities across the country have been wiped out by Russian air strikes in the past week.

But Ukraine’s President Volodymyr Zelensky insisted the attacks would not stop his troops as they push on with fierce resistance in the south and east of the country.

The leader also urged his people to conserve energy as the bleak prospect of a dark and cold winter looms.

Russia claimed yesterday its forces had continued to launch assaults on energy infrastructure.

Meanwhile, Britain was accused of escalating the conflict as a war of words erupted.

Defence Secretary Ben Wallace held a telephone call with Sergei Shoigu, Vladimir Putin’s defence minister, as the invasion continued to stretch tensions between the West and Moscow to their highest point in decades.

Mr Shoigu claimed during the conversation that the West was conspiring with Kyiv to use a “dirty bomb” – a conventional explosive packed with radioactive material.

But Mr Wallace rejected the accusation, with the Ministry of Defence stating: “Minister Shoigu alleged that Ukraine was planning actions facilitated by Western countries, including the UK, to escalate the conflict in Ukraine.

“The Defence Secretary refuted these claims and cautioned that such allegations should not be used as a pretext for greater escalation.”

“He also reiterated UK and wider international support for Ukraine and desire to de-escalate this conflict. It is for Ukraine and Russia to seek resolution to the war and the UK stands ready to assist.”

Mr Shoigu had made similar claims to his French counterpart.

He said during talks with Sebastien Lecornu, France’s armed forces minister, the conflict was “trending towards further uncontrolled escalation” and Ukraine may go on to use a “dirty bomb”, though Mr Shoigu provided no evidence.

Dmytro Kuleba, Ukraine’s Minister of Foreign Affairs, branded the claim “absurd” and said his country is a committed member of the Non-Proliferation of Nuclear Weapons.

Previous Russian assertions that Ukraine may resort to using banned weapons, such as biological arms, have stirred concerns Moscow might be preparing to stage “false flag” attacks and blame them on Kyiv.

People in the occupied southern city of Kherson were told yesterday they should leave immediately.