President Biden, on his first trip to the West Coast as president, surveyed damage from wildfires in California, saying the U.S. could not “ignore the reality that these wildfires are being supercharged by climate change.”

These fires are blinking code red for our nation. They’re gaining frequency and ferocity. And we know what we have to do. My “Build Back Better” plan includes billions of dollars for wildfire preparedness, resilience and response, forest management to restore millions of acres and to protect homes and public water sources. We know that decades of forest management decisions have created hazardous conditions across the Western forest, but we can’t ignore the reality that these wildfires are being supercharged by climate change. It isn’t about red or blue states. It’s about fires, just fires. When I think about climate change, I think about not the cost, I think about good- paying jobs it’ll create. But I also think about the jobs we’re losing due to impacts on the supply chains and industries because we haven’t acted boldly enough. We have to build back, and you’ve heard me say it 100 times, not just build back, but build back better. As one nation, we’ve got to do it together. We’ll get through this together. We just have to keep the faith. 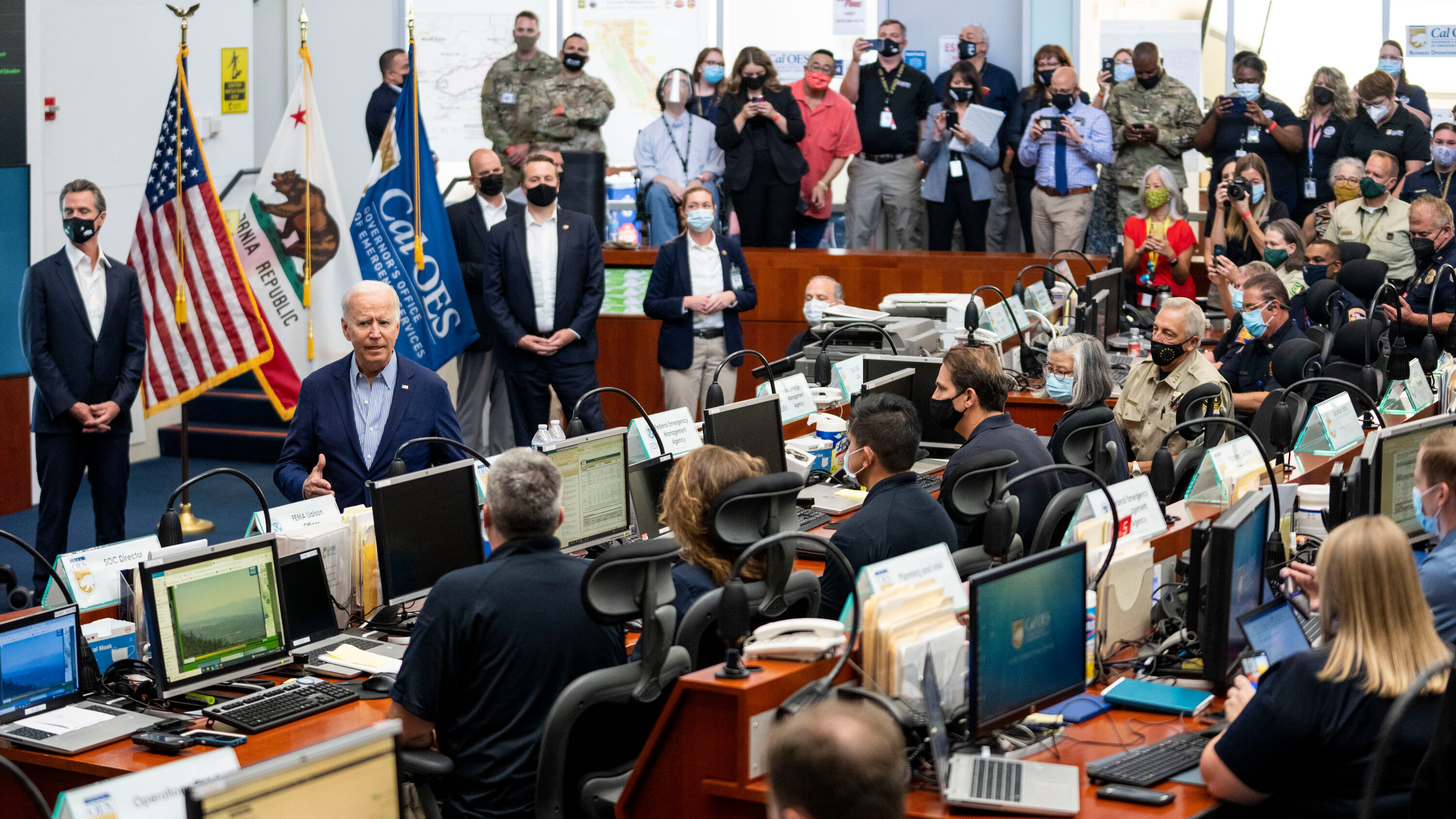 By Christopher Flavelle and Zolan Kanno-Youngs

President Biden visited California on Monday to tout his efforts to better protect the state against the raging wildfires that have burned more than two million acres, displaced thousands and pushed responders to the brink of exhaustion.

“These fires are blinking code red for our nation,” said Mr. Biden, who used the occasion to promote two bills pending in Congress that would fund forest management and more resilient infrastructure as well as combat global warming. The country couldn’t “ignore the reality that these wildfires are being supercharged by climate change,” he said.

But experts say there are limits to what the federal government can do to reduce the scale and destructive power of the fires, at least in the short term. That’s because much of the authority needed relies on state and local governments, those experts said.

Federal action largely depends on Congress approving new funding — but even if approved, that money might not make much of a difference anytime soon.

“Climate change impacts can’t be absolved in a single year,” said Roy Wright, who was in charge of risk mitigation at the Federal Emergency Management Agency until 2018. The goal, he said, should be “investments that will pay back over the coming three to five years.”

On wildfires, like so much else, President Biden presented himself as the opposite of former President Donald J. Trump: Clear about the role of climate change, willing to listen to experts, and promising to better defend places like California against a growing threat.

“If we have four more years of Trump’s climate denial, how many suburbs will be burned in wildfires?” Mr. Biden said in a speech last year as California staggered through record-breaking fires. “If you give a climate arsonist four more years in the White House, why would anyone be surprised if we have more of America ablaze?”