Former prime minister Paul Keating has weighed into a Labor dispute over the selection of Kristina Keneally for a key seat in the lower house, declaring her a “huge executive talent” who will fight for those who deserve a bigger share of the nation’s wealth.

Mr Keating backed Senator Keneally as the best candidate for the electorate of Fowler in western Sydney, saying she had proven her ability to advocate for working people and defend Labor values. 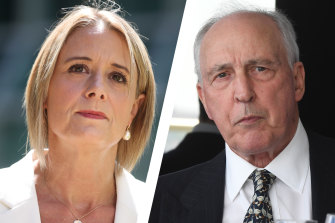 Kristina Keneally has received the backing of Paul Keating to run in the seat of Fowler.Credit:Alex Ellinghausen/Peter Braig

“What western Sydney needs is someone with this ability – an ability to garner or eke out a bigger share of the national income, because people in western Sydney live on the ebb and flow of the economy.

“Broadly, they don’t have capital, they have nothing to sell but their time, and therefore public policy – whether it be in wages, in health, in education – materially matter to their quality of life, particularly now with COVID.

“Local candidates may be genuine and well-meaning but they would take years to scramble to her level of executive ability – if they can ever get there at all.

“And on the diversity point, she’s a migrant herself – she got off the plane and scrambled her way to the NSW premiership, which is a pretty big effort, a pretty good effort.”

Mr Keating’s intervention carries the weight of a Labor hero who was raised in Bankstown in western Sydney and represented some of the districts within the electorate of Fowler during his 26 years in Federal Parliament as the member for the adjacent seat of Blaxland.

“I can tell you the people of western Sydney need one thing – they need the national government to pull a share of national income more their way,” he said.

The comments follow days of calls from some Labor members for action by Opposition Leader Anthony Albanese and others to overturn a decision last week to install Senator Keneally as the party’s candidate over local lawyer Tu Le.

Ms Le, a Vietnamese-Australian who was backed by sitting Labor member Chris Hayes, told ABC Radio National on Tuesday morning that the events had become a “sour debacle” and meant the community could not choose its Labor candidate.

A Labor councillor on Liverpool Council, Charishma Kaliyanda, said on Tuesday that the party had to “step up” and do the right thing in Fowler because the decision to overlook Ms Le damaged the party.

“It sends a wider message to culturally diverse, educated, aspirational young people that there isn’t a place for them in Australian politics,” she wrote.

While some of the criticism has focused on the fact that Senator Keneally currently lives on Scotland Island on Pittwater, she lived in her state electorate of Heffron, around southern Sydney and Kensington, during her time in NSW Parliament and as NSW Premier.

Mr Keating said Senator Keneally “absolutely” had the qualities needed to be a cabinet minister in a federal Labor government.

“She’s in the top handful of people in the party and, as her performance in the Senate shows, she’s a great advocate for Labor’s value system,” he said.

“And she has what a lot of people in the Labor Party do not have, and that is a permanent sense of indignation about those less well-off.”

While Mr Keating said he did not want to comment on Prime Minister Scott Morrison and the Coalition government, he said Senator Keneally was needed in Fowler because of what she could bring to a federal Labor government.

The former prime minister said Ms Keneally had shown her calibre as an executive leader as NSW Premier when the Barangaroo project was being developed, with his input into the redesign of the western edges of the city and the wharves previously known as the Hungry Mile.

“There’s every good and strategic reason why Kristina Keneally should be endorsed as the federal candidate for Fowler,” Mr Keating said.

“Keneally is a huge executive talent and a great proselytiser for her beliefs.

“And in her role in the Senate she’s been a great proselytiser for Labor values.”