The WWE has tried for a good few years to try to establish Roman Reigns as the top star of the company, but some fans aren’t buying it and continue to boo him in arenas across the globe.

CM Punk controversially walked out on the WWE in 2014 and made the jump to the cage in 2016, only to be squashed and submitted in the first round at UFC 203 by newcomer Mickey Gall. 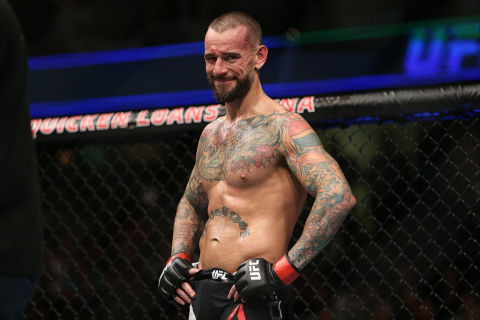 Speaking before Monday Night Raw in London this week, Digital Spy asked Reigns if he’d be watching Punk’s next fight against 0-1 fighter Mike Jackson next month at UFC 225 in Phil Brooks’s hometown of Chicago.

He laughed: “If it goes longer than 30 seconds! I better prepare my food and drinks early, because you never know…”

Cheeky. It’s safe to say that Reigns won’t be taking the same path that Punk did for now.

Following the successful transition of ex-UFC poster girl Ronda Rousey to the world of professional wrestling, we asked Reigns if he had given any thought to the possibility of jumping ship in the opposite direction.

He told us: “As far as me going into MMA, I don’t really have any desire. I come from a family of performers and wrestlers, I’m kinda living my family business.

“I don’t have an amateur background, I played college football and a little professional football. The Octagon really isn’t my yard I don’t think. I like where I’m at at this point.”

Reigns then went on to discuss one of his biggest rivals in the WWE, Brock Lesnar, and the chances of success should The Beast return to the UFC. 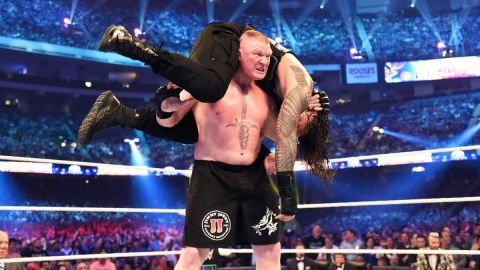 “I mean, we all know what he did last time in his last fight against Mark Hunt… and he looked great,” he said.

“At his age he’s not getting any younger, I think this is the time to pull the trigger when it comes to [UFC].”

The former Shield member faced off against Lesnar at the Greatest Royal Rumble in Saudi Arabia last month.

The match ended in controversial fashion after Reigns speared Lesnar through the steel cage only for the referee to declare The Beast the winner.

But despite their rivalry, Reigns was happy to support Lesnar’s career outside of the squared circle.

“It’s important as a WWE superstar that we are successful in other genres of entertainment,” he said.

“So I support him fully in what he does and it’s pretty neat to watch him going into the Octagon after wrestling after doing what we do.”

And regarding the boos he continues to face to this day, Reigns told journalists before Raw: “As long as fans are showing up and as long as they’re making noise, I’ve done my job.

“I’ve done what I’m supposed to do and that’s draw people into the building.”

He added: “What I and everybody in WWE thinks is to go out there and work hard and continue to show why I am the guy.

“We have to look at it as a global company. We’re not just worried about the one town that we’re in, we’re covering our entire fanbase.

“The WWE Universe is humongous. We have to keep that in mind.”

The WWE UK tour continues. WWE Money in the Bank 2018 takes place on Sunday, June 17 and airs live on the WWE Network.