Its epic main event saw Triple H FINALLY overcome The Undertaker (with a little help from his friend Shawn Michaels), though Kane helped his fellow Brother of Destruction have the last word (on the night, anyway). 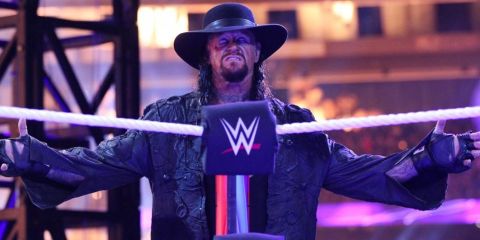 There was plenty of fallout thought as Raw returned to Chicago and the build to WWE Crown Jewel and WWE Evolution began in earnest.

1. Shawn Michaels will return from retirement and D-X will face the Brothers of Destruction at WWE Crown Jewel

Oooh boy, the rumours were true.

One of the only men to ever stay retired has decided that he’s no longer retired.

After the show of disrespect from The Undertaker (and Kane) after Triple H finally defeated the Phenom with some help from HBK, Shawn Michaels has decided that his retirement is now null and void.

The Game asked the question and Shawn Michaels decided to throw away eight-and-a-half years of keeping his word… and for what?

The Brothers of Destruction will face D-Generation X at the controversial WWE Crown Jewel at the King Saud University Stadium in Riyadh, Saudi Arabia on November 2.

To say we have mixed feelings about this would be an understatement. We’ve got enough reservations about WWE Crown Jewel already, given the politics, and now this.

Of course we’ve always dreamed of seeing HBK properly back in the ring, but can he still deliver? He’s the same age as Taker at 53, but with a lot less miles on the clock.

And is a tag match with three other old timers what we really want to see? What about dream matches against the likes of AJ Styles, Daniel Bryan and the like?

The rumours are that, win or lose, the aftermath of this match will see one (final?) match between Shawn Michaels and The Undertaker, either at Survivor Series this year or WrestleMania next.

Despite our massive concerns, we’ll hold fire on judgement until this all plays out.

The other burning rumour was confirmed last night, as the Bellas went bad and immediately got rewarded for it.

After Ronda Rousey and The Bella Twins picked up a second successive win over The Riott Squad last night, Nikki and Brie turned on the champ.

Using the numbers game and the element of surprise, they put the Rowdy one down, and clearly signalled their intent.

They’re not so enamoured by the new kid on the block, and they want what she has.

There have been long-standing whispers of a Ronda Rousey vs Nikki Bella (with Brie Bella) match for the WWE Raw Women’s Championship at WWE Evolution, and after last night’s turn it was confirmed.

Will the Bellas be able to shake off the last of the ring rust by the end of the month to get a real crack at the title?

Or will Ronda be just too bad for the two Bellas between two bells? Despite knowing this would happen for a while, we’re actually pretty intrigued.

3. Two of WWE Evolution’s odd singles matches just got turned into a must-watch tag team clash with Trish & Lita vs Alexa and Mickie

There had been an interesting build to two singles matches at WWE Evolution before last night.

It was the New Guard vs Returning Legend with Alexa Bliss vs Trish Stratus, and a grudge match from the archives with Lita vs Mickie James.

It wasn’t that those matches didn’t look fun, but they seemed to have dropped into the card from nowhere.

But now the whole thing’s had a shakeup, and after Lita made her return to Monday Night Raw last night, Alexa and Mickie made the offer.

Why not make this a Tag Team match? The two icons of the Attitude Era take on Alexa and Mickie?

We’re most definitely in, and after their strong showing in the Women’s Royal Rumble, we can’t see any reason why Lita (43) and Trish (42) can’t stretch this out into a proper run this time.

4. Paul Heyman pops by and does the talking for Brock Lesnar

So, Brock Lesnar has his title rematch against Roman Reigns and Braun Strowman booked for WWE Crown Jewel, but he’s in no hurry to get to Monday Night Raw to talk about it.

No matter, as Paul Heyman is more than happy to talk up his client, as he did last night.

The new theory? Well, despite it being a Triple Threat match against The Big Dog and The Monster, Paul thinks Lesnar has the edge. There’s a surprise.

His reasoning is that while Reigns and Strowman are travelling the country taking lumps out of each other, his client is training hard for just one match without any of that bother.

A fresh Brock Lesnar against a worn out Reigns and Strowman? Well, as the Advocate says, calling a result for the Beast is a spoiler, not a prediction.

It wouldn’t be the first time Heyman (or Lesnar) for that matter have been overconfident though, so we’re still keeping our prediction powder dry.

5. Kurt Angle is back back back and is in the WWE World Cup

Is it called the WWE World Cup because they love football in Saudi Arabia? Probably.

Anyway, after John Cena (and his new hair) was announced as the first competitor, Baron Corbin attempted to book his own spot by booking a Battle Royal against some unknown international talent.

The problem for the Lone Wolf was that under a mask was none other than Kurt Angle, who made his presence clear with some German Suplexes, an Angle Slam and finally by eliminating Corbin.

Apparently Angle’s still actually on holiday (he’s like that colleague who keeps sending emails from the beach or something), but he’s already booked for the big day in Saudi Arabia and you can bet that Baron Corbin isn’t happy about it.

6. Dean Ambrose may still be thinking about leaving The Shield

This one is going to run and run. Dean Ambrose was The Man in Australia, clinching victory for The Shield with the pin, but it all went wrong in last night’s rematch.

While it looked as though the Hounds of Justice would take advantage of discord between Braun Strowman and his Pack, in the end Drew McIntyre took advantage of the pandemonium to hit a massive Claymore on Ambrose for the win.

After being the hero Down Under, a dejected Ambrose rolled out of the ring and walked to the back, leaving his brothers to lick their wounds.

It wasn’t quite clear what that meant. Had Ambrose turned his back on Roman Reigns and Seth Rollins? Or was he just looking for some alone time after a hard few days?

What we know for sure is that the new Dean Ambrose is even more unpredictable than the Lunatic Fringe we knew before his injury.

As long as he remains belt-less while Roman Reigns has that Universal Title and Seth Rollins has the IC strap, there’ll always be an underlying tension in the trio.

What did you think of Monday Night Raw? Let us know at @digitalspywwe.