There is a pervading sense that the reboot of Will & Grace, conceived during the making of a get-out-and-vote election video and christened during the turbulent change of power at the apex of American government that followed, has found an unexpected political voice.

But put that to Debra Messing, the 49-year-old, Brooklyn-born second half of one of the most successful sitcom pairings of all-time and she is quick to offer a correction. The original series, Messing contends, was just as political but in a different way. 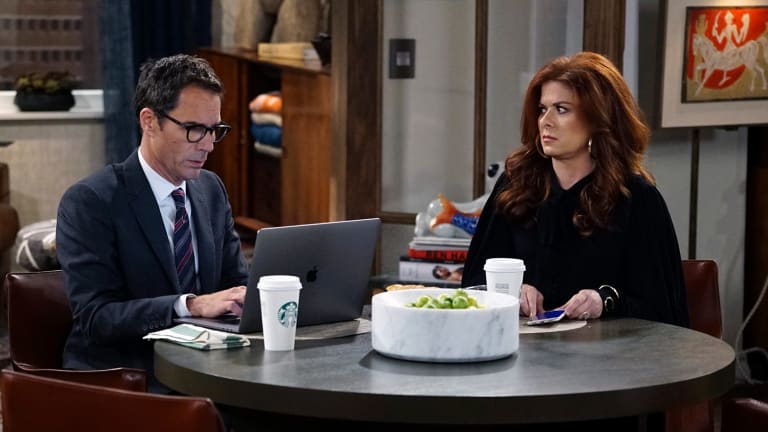 Eric McCormack as Will Truman and Debra Messing as Grace Adler in the Will and Grace reboot.

"It was the first of its kind, showing the life of two gay men in a way that had never been celebrated before, and that was an act of protest," Messing says. "It was revolutionary, it was saying, you must look at us, you must accept us, we're not going away. To me that's political."

In the decade between the original series and its reboot, that landscape seemed to have changed dramatically, and positively, with significant gained ground in gay civil rights and the legalisation of gay marriage in the US, Australia and other countries. 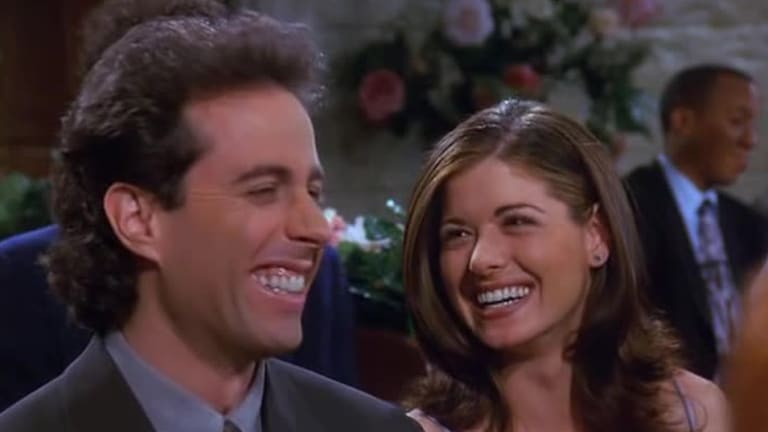 Debra Messing as Beth, one of Jerry’s 66 girlfriends on Seinfield.

Then, in 2017, Donald Trump ascended to the US presidency and there has been a sense that all of the gained ground is once more under siege. Trump has proposed a transgender ban in the military and nominated to US courts and other senior posts people with anti-LGBTQ records.

Messing, who, in the second act of her career has found her own powerful political voice on social media, describes the United States as a country "in a state of crisis".

Such a declaration doesn't require too much effort to corroborate; just flicking through the TV news channels offers grim headline after grim headline, delivered with the disturbing speed of primary school flash cards.

"The progress that has been made since the end of our [first series] has actually been rolled back because of our new administration," Messing says. "That made it just the obvious thing to shine a light on, so we're making jokes about immigration and sexual harassment and all these other things that are in the zeitgeist of our country right now." 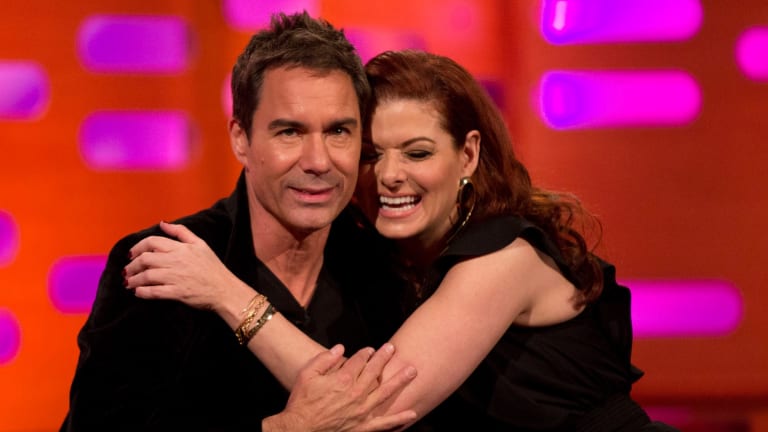 Eric McCormack and Debra Messing during filming of The Graham Norton Show.

It is their duty as artists, Messing says, not just because holding a mirror to society is one of the functions of art, but "because of what the show always was – we're not doing something we didn't always do".

"I think because I'm a grown-up now, and I found my voice and I've become a student of people who are much smarter than me and much more involved, and I see the impact of having a voice, it feels more important than ever before to use our voice in our art to ask questions, to shake things up," Messing says. "That's the role of art." 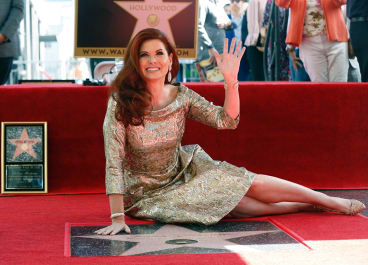 Armed just with a smartphone, Messing has become something of a social media warrior, fighting for her beliefs with a political voice that decades ago might have been considered too controversial for an actor surrounded by a headline-sensitive PR machine.

The old Hollywood rulebook would have sternly ordered: don't get involved, don't rock the boat, play the game. 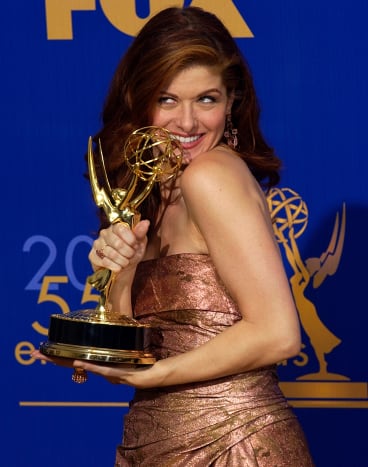 Debra Messing after winning outstanding lead actress in a comedy series at the 2003 Emmy Awards.

It feels like we're getting away with something, because you're not supposed to be able to do this.

It is a choice, Messing says candidly, "because I know women today who are liberals who would not even assert that they were supporting Hillary Clinton on Twitter because they were scared of the ramifications in terms of people going to see their movies".

"And I know every day that I share my voice there are going to be millions of people who are not going to agree with me and many of those people are going to choose not to go and see my work anymore," she adds. "I'm fine with that. That is a trade-off that makes sense to me.

"Certainly in the last six months with the #MeToo movement and the #TimesUp initiative, we are in a time in history when women are demanding their voices be heard and respected and acknowledged. It's a thrilling time and it feels like a potent time, an important time," she says.

More stunning to her, she adds, is the idea that in an era of such turbulent social change, of growing global instability and clashes between ideologies, people of any belief, from any side of the political spectrum, would not see it as their call to speak up.

"It's hard for me to understand, living in this time now in our country, and not being inspired to speak up about anything that you believe in, regardless or your political affiliation," she says.

"It just feels, you know, that is the core of our democracy and I think because our democracy feels weakened and feels like it's at risk, I think that's why people are speaking up louder and more often than ever before."

Perhaps the most fascinating aspect of Messing's political journey is that were it not for a quirk of fate – the rebirth of the series that made her a star in the late 1990s – she would not presently have the platform to present her viewpoint.

In business terms, Hollywood is a tough treadmill and few who are lured into its spin are offered a second go-around. If Messing, who had successful runs in Ned & Stacey (1995-1997) and the original Will & Grace (1998-2006), had followed the script she would have faded gracefully from sight to make way for someone younger, cheaper and more ditzy.

Even the reboot of Will & Grace itself, a ratings success, is a departure from convention.

Though Hollywood has always had a great appetite for looking backwards, sequels and reboots are a riskier business than most people assume. For every Will & Grace and Roseanne, there are a dozen more with titles such as Bionic Woman, Charlie's Angels and Ironside that fell by the wayside; audiences are nothing if not fickle and unforgiving.

If the new Will & Grace teaches us anything, it's that the old adage "you can never go home again" isn't quite true. The 2.0 versions of Will Truman and Grace Adler are older, perhaps slower to physical comedy and a little more life-weary.

But the inextinguishable flame of their friendship is somehow comforting, in a world where such real-life friendships have become frail, uncertain or, worse, fractured by the increasingly poisonous political divide.

"It feels like we're getting away with something, because you're not supposed to be able to do this," Messing says of the rebooted series. "And I think that's why there is a very ever-present gratitude among the four of us that did not exist during the first run.

"We were grateful for our job and loved it and loved each other, but … getting to go back and do it again and play in the playground together again, but as different people, because we're all older and wiser –

And for Messing, there is a perhaps unexpected serenity to be found in the present that eluded her younger self.

In 1998, when Will & Grace premiered, the then-30-year-old was engaged to be married, she was "hopeful and excited" about her work and hungry for Hollywood to confirm her, and ready to start the next chapter as a wife and mother, she says.

"Now, 20 years later, I'm divorced and dear friends with my ex-husband and co-parenting a 13-year-old magnificent boy and have been on Broadway and done films and other TV shows and never saw that happening," she says.

"I have lived a more chaotic life than Debra 1.0 ever wanted or ever anticipated, but I think as a result, I have come out more resilient and more grounded and more confident about the future and not needing to know what's gonna happen next."