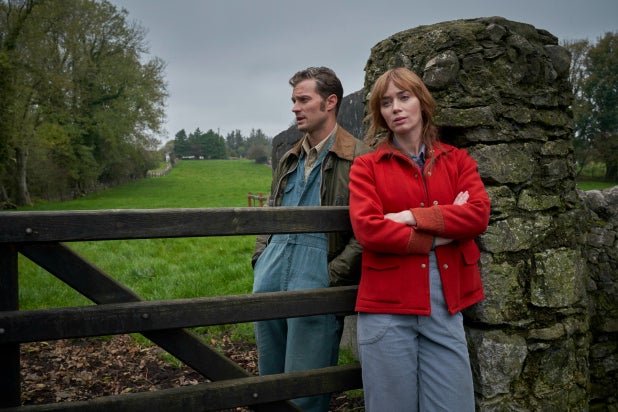 It was 31 years ago when cinematographer Stephen Goldblatt first met playwright John Patrick Shanley. At that point in his career, Goldblatt had photographed “The Hunger,” “Young Sherlock Holmes,” and the first two “Lethal Weapon” movies. Shanley, who had won an Oscar for writing 1987’s “Moonstruck,” needed a trained eye to lens his first film as a director. It was an offbeat romantic comedy about a terminally ill man, played by Tom Hanks, who agrees to leap into a volcano to assuage island gods.

“‘Joe Versus the Volcano’ was a wonderful experience for me,” Goldblatt said to TheWrap. “John was such an imaginative director and I think the film was well ahead of its time. We got on great together and stayed friends over these years.”

Goldblatt was born in South Africa and raised in London. Now 75, he makes his home in San Miguel de Allende, Mexico. A couple years ago, he received a call from his old pal Shanley. He had cast Emily Blunt, Jamie Dornan and Christopher Walken for his third film as a director, the Irish-set love story “Wild Mountain Thyme,” based on his Broadway play “Outside Mullingar.” (Shanley also directed Meryl Streep and Philip Seymour Hoffman in “Doubt” in 2008.)

Goldblatt accepted and the two men even shared a house during the production in County Mayo, Ireland. “It just made sense to stay in the same house,” Goldblatt said. “We have a good friendship, so that helps. I went for a two-week location scout with John and we had so much to see. So John and I moved in together, then his assistant moved in, then eventually my wife arrived. It was a very nice experience.”

He continued, “County Mayo is just heaven. John and I were walking around neolithic burial grounds. There are ancient monuments and cemeteries and strange spiritual places. It is beautiful but it’s more than just the physical beauty. There’s a history to it. When we were doing overhead shots in a helicopter, we never had to take anything out of the frame, either digitally or otherwise. Because at 500 feet, it’s basically unchanged from two or three centuries ago.”

Ballina, the town where much of the film’s action was shot, is the ancestral home of Joe Biden. “It’s a beautiful Irish town with fantastic Irish pubs and full of character,” Goldblatt said. “But for COVID I would have visited again by now. I can’t wait to go back.”

“Wild Mountain Thyme” is a romantic story with certain odd, mystical qualities that are revealed in the relationship between Blunt and Dornan’s characters. The earth of the farmland appears preternaturally green. That slightly fantastical sense was suffused into the photography, Goldblatt explained.

“The story is about the land that these characters inhabit. We made a conscious decision that the landscapes were part of the narrative. But still I must say John and I are the luckiest director/cinematographer team in the world. We had gorgeous late-autumn light and color, when we could have had three months of rain. In fact, the rain started about two days after we wrapped. There’s a beautiful scene with Jamie and Emily near the end of the film, and I’d always planned where the camera would be for it. But I could have never planned for the sun to have burst through the clouds and hit them with backlight at just the right moment, with the river roaring behind them. It was fantastic.”

Goldblatt is especially glad for another collaboration with Shanley. Over the course of his career, the cinematographer has often favored workflows with the same filmmakers. He’s worked on multiple projects with late greats Mike Nichols (“Angels in America,” “Closer,” “Charlie Wilson’s War”) and Alan J. Pakula (“The Pelican Brief,” “Consenting Adults”).

“Mike and Alan, oh I miss those guys every day,” he said. “It wasn’t my friendships with them that got me the work. Our friendships, which were wonderful, sprung from the work. And they could both be challenging directors to work with.”

Goldblatt elaborates that those are traits Shanley shares. “John is a wonderful guy but he’s very demanding and he knows what he wants. Which is great and totally fine. I think was ties him to a director like Mike Nichols is that their projects have been produced on stage. ‘Angels in America,’ of course, was a very successful theater production. And that’s how ‘Wild Mountain Thyme’ began as well. It gives confidence to the director because they know what works.”