Nicole Kidman puts her money where her mouth is. Always in demand, this fearless actress goes where many fear to tread. She has made it clear that when she picks her projects, half must be directed by women. Beyond that, she urges her directors to hire as many women as possible on the crew. Thus, she committed to starring in Karyn Kusama’s “Destroyer,” even with a meager budget of less than $9 million.

“Scripts aren’t getting better,” Kidman said. “They’re scant. I still have to find them. You don’t change the statistics by just saying it. ‘Karyn — let’s go. You get to go again!’ She’s had hits and failures. It’s easier to get behind the 25-year-olds. The female DP, she’s gotten some work. You’ve got to allow women sometimes to come out of gate. They have to build up experience and learn and get better and then someone else invests in you a bit more; you stretch and you go. We’ve all got to keep saying it, or it will all just fade away.”

Developed by writers Phil Hay and Matt Manfredi and Kusama (who collaborated on “The Invitation”), “Destroyer” launched at fall film festivals with early applause from critics that was muted closer to release. (Metascore: 61.) To its credit, this hardboiled LA noir is not a mainstream entry; it expanded to 27 arthouse theaters this weekend to decent response.

No worries: Kidman stars in the two top box-office performers this week, “The Upside” and “Aquaman,” not to mention well-reviewed specialty entry “Boy Erased,” which is nearing the end of its run on 16 screens. At the Critics Choice Awards January 13, where she was up for Supporting Actress for “Boy Erased,” she admitted that she didn’t know she was on screen in four movies at once. 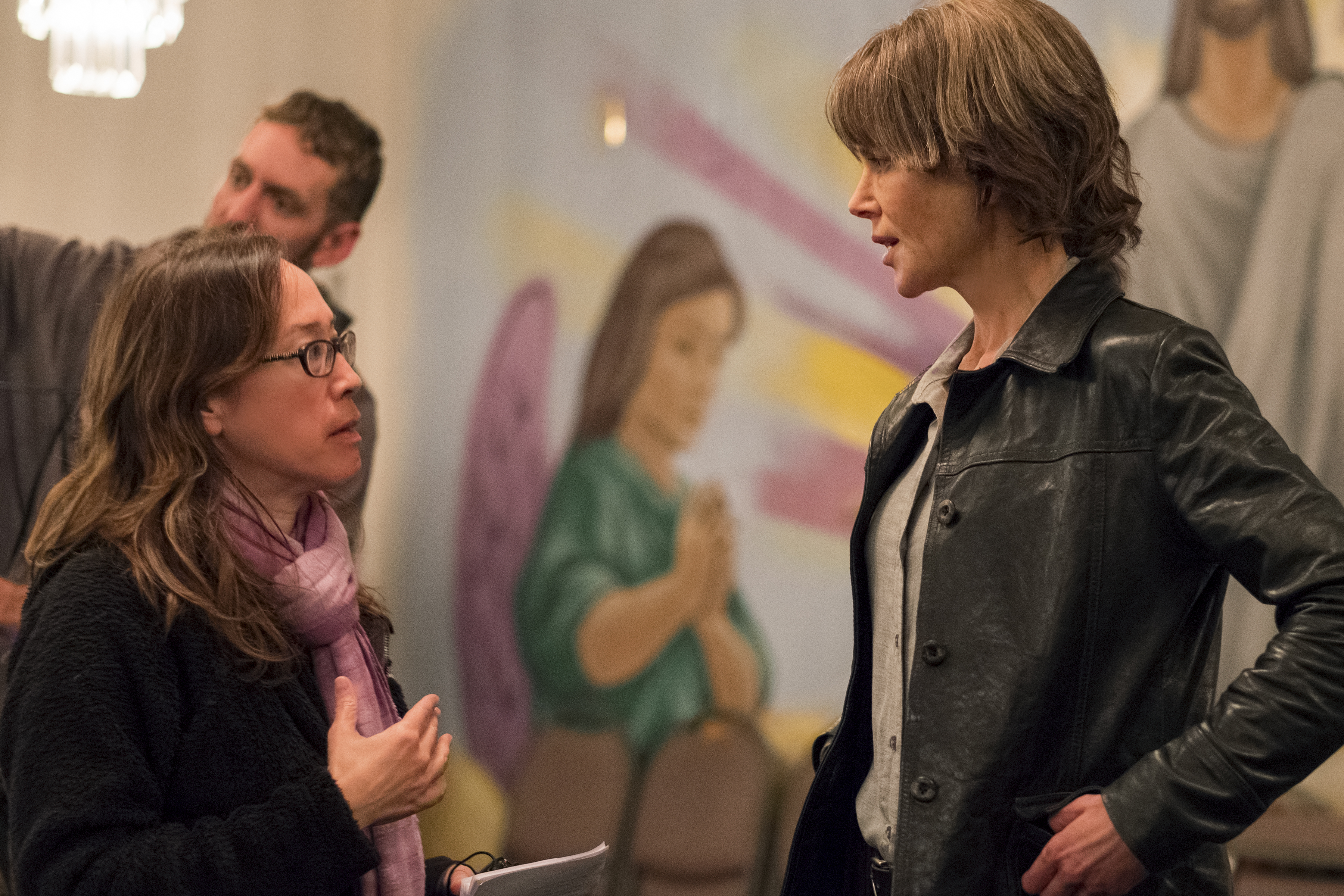 Director Karyn Kusama with Nicole Kidman on the set of “Destroyer”

Kusama and Kidman blow up the mystery-thriller genre with “Destroyer,” a mother-daughter atonement drama disguised as an L.A. cop procedural. “That was the emotional spine of the movie,” said Kusama. “There’s a dovetailing of a corrupt cop, an institution we know has the ability to be totally compromised, and the sticky and more adult theme of being accountable to your children and finding a way to communicate honestly with them about who you really are and who they could really be. The larger engine of the movie is the character herself, her past and her desire to become accountable for this misdeed.”

When the filmmakers were raising money, Kusama learned not to describe the movie as character-driven. “It’s not easy entertainment, not light and airy,” she said. Her influences include “Taxi Driver,” “Serpico,” “Under the Influence” and “A Prophet.” Said Kusama, “These are committed genre films that manage to stay launched in your mind and imagination.”

Kidman transformed herself twice in order to play the younger and older versions of LAPD detective Erin Bell, who is an effective cop who doesn’t care what anyone thinks of her. Isolated and lonely, she’s a powerful woman who is damaged and broken. While she is emotionally shut down and unable to help herself, she is determined to save her troubled teenage daughter (Jade Pettyjohn) as she revisits her past sins, revealed in a series of complex flashbacks. 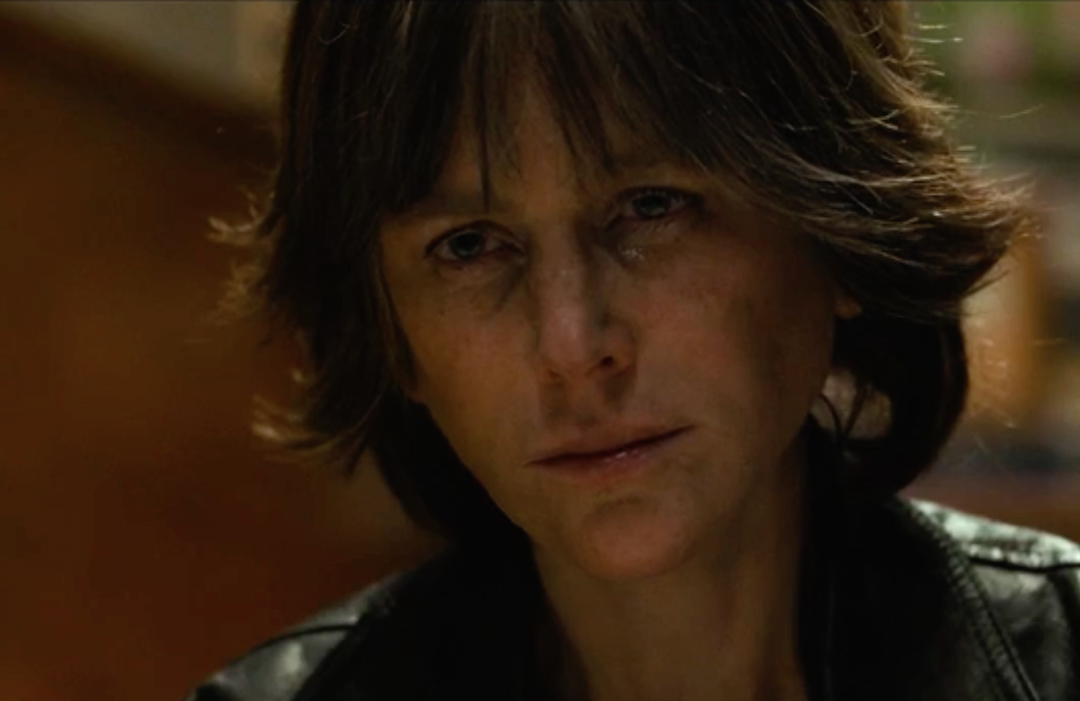 Kidman signed on to what she considered compelling classical tragedy. “The final place she’s heading toward,” Kidman said, “is her daughter. She doesn’t know how to touch someone. Some characters can say, ‘I love you,’ it’s present and available. Erin’s in complete lockdown. She’s never said it. ‘I do love you,’ she finally says. Her daughter thinks by her every action that she doesn’t. That, to me, is devastating. It’s the desire to have something healed in a relationship.”

Kidman and Kusama had 33 days to work fast on a constantly moving low-budget L.A. shoot through ugly concrete, almost dystopian locations. “We needed to see LA in all its gritty glory,” said Kusama, “and that meant making some big moves. Now we see an LA haven’t seen much of before.”

The time shifts were handled by shooting the present-day and the flashback sequences in big chunks. But all departments had to track the temporal progression of Bell’s deterioration from various hits and bruises and wounds. Whole scenes would be cut if they didn’t make their days. “I had to stay in character the whole time, which is not a place I’d go again easily,” said Kidman. “I didn’t realize what I’d taken on. When I was in it, I was deeply depressed. I’d wear the jeans and coat home. I just went down a spiral with it, which is an unusual place to be, having a family and all that.”

Kidman had never trained to play a cop before. She fired a rifle in “Cold Mountain,” but had never cocked and reloaded a pistol while running. “I wanted her to be great cop,” she said. “The way she plants her feet, carries a gun in her jeans without being seen, moves to scope out a room, the way she sits, ready to go. I trained for that, it changed the way I could move, altered my physicality.”

Shooting such an ambitious actioner on a low-budget put extra demands on Kidman. While she had fun fighting with Tatiana Maslany and Bradley Whitford (telling him, “I’m going for it, don’t knock my teeth out, trust me”), it was physically grueling, especially without the protections of a studio action set’s padded floors and replaced doors. “I had to fall on a cold marble floor, which was scary,” she said. “If you get injured, you’re done for. I had some padding, we’d do one take or two and hope for the best. We’d get in there and get it and hope the gods were on our side. It’s scrappy filmmaking.”

The filmmaker and Kidman were about the same age, 50, during filming. “I couldn’t do what she did,” said Kusama. “She’s self defined as fragile and vulnerable, but I never saw that on set. She’s like a frigging lion. It’s more than working out, it’s a ferocity, it’s more than physical, there’s an acute mental toughness to her. That’s what keeps her surprising and mysterious. She doesn’t lead with that when she doesn’t want to. But she holds a lot of mystery, which is what I needed for this character. ‘What is going on in her?’”

Movie stars are afraid to be disliked or not beautiful; according to Kusama, Nicole said, “I can’t be either.” In a scene where the grown-up Bell gives a dying man she’s known for years a hand job in order to get the information she wants, Kusama asked the actress to be “very workmanlike, which makes it not exploitive,” said Kidman. “That’s a woman directing that scene.” 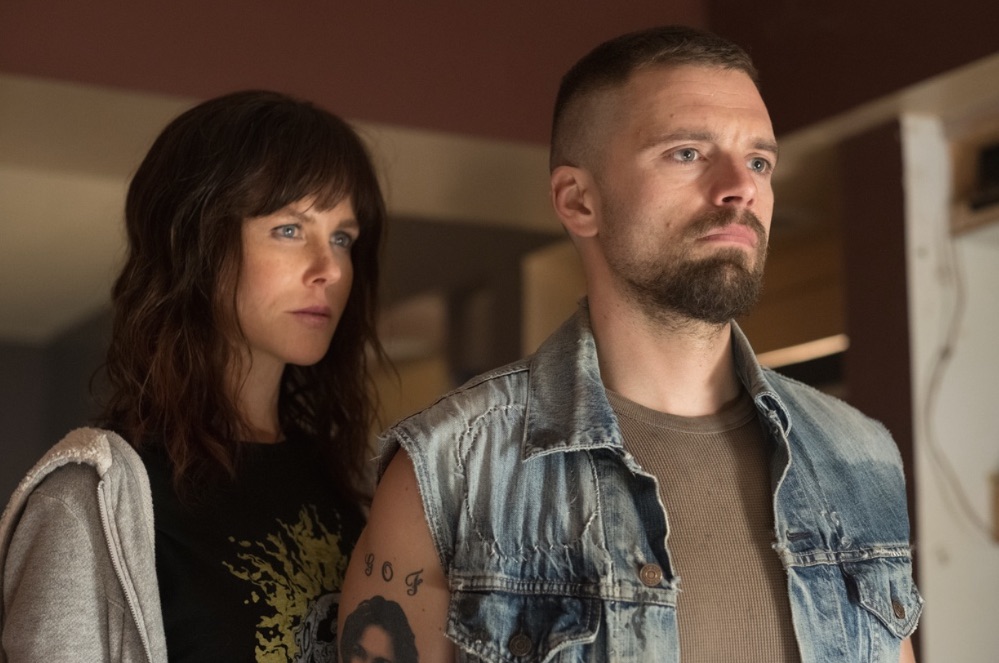 Makeup artist Bill Corso (“Deadpool,” “Foxcatcher”) used Kidman’s face as a canvas in creating Erin Bell. “Let’s create a woman who is an alcoholic,” Kidman told him, “who has done a lot of drugs, grown up in an abusive household in the desert in Palmdale, whose mother burned her with cigarettes and beat her. Let’s make that person real.”

The main thing was to make the old and young looks very different. “In the present day you need to lose Nicole,” said Kusama. “She has to disappear, she can’t be on seen. Bell doesn’t wear sunscreen, she has a drinking problem, and sleeps in her car, she never sleeps. While her face is disturbing, in the end what I loved about the performance is that she actually becomes more beautiful, more attractive, more charismatic.”

Kidman had to convince the filmmakers that she could also play the 29-year-old Bell. “A lot of the time they want to cast a younger actor,” she said. “They worry whether I can do both.”  Her young Bell has “a brightness in her eyes, a different spirit and playfulness and posture, a higher voice,” said Kusama. “She played with all this alongside some skillful makeup.” One prosthetic added a tinge of baby fat “just to make her look not emotionally and spiritually starved, to give her an aura of being more confident and well-fed and hopeful.”

Finally, through, playing the fierce Erin Bell, who carries her daughter out of a snowy forest, isn’t about makeup. “If I fail as an actor, it’s because I didn’t go there emotionally,” said Kidman. “If I do not bring everything to support that, then I’ve failed. I’m willing to take the hit for that, but I’m going to try.”