Mary Padian was one of the few female buyers featured on “Storage Wars” to become one of its breakout stars. Her infectious laugh and bubbly personality won viewers over, and she was also an interesting addition to the cast because she had a different objective than the other bidders. What many of them saw as trash really was treasure to her — she could take items that looked completely useless and transform them into art.

Viewers first met Mary on “Storage Wars: Texas.” While everything is supposed to be bigger in the Lone Star State, the spinoff couldn’t compete with the OG series and only lasted four seasons. Mary’s popularity helped her land a role on the main show, so the petite creative packed up her bags and headed to California to join the likes of Brandi Passante, Dave Hester, and Darrell Sheets in 2014 (via Sparefoot). She forged a special bond with fellow buyer Ivy Calvin, who became her “BFF for life” during Season 7 when he took a pile of junk off her hands and paid for the pleasure. “My work — I wouldn’t normally hang out with these people normally ever if it wasn’t for the show,” Mary said on the “Fridays with Flea Style” podcast in 2017. Her Instagram bio says that she was “formerly” on “Storage Wars,” so what happened to the peppy refurb pro and what does she look like now?

Mary Padian might not be a cast regular anymore, but she did appear on the Season 13 premiere of “Storage Wars.” She helped her pal Brandi Passante out by bidding in her stead when Brandi wanted to score the same storage locker as her ex Jarrod Schulz. “Mary has to bid for me today, otherwise I have a feeling that I won’t get anything,” Brandi said. (Spoiler alert: Ivy Calvin ended up getting the locker.)

Mary shared an Instagram selfie with Brandi that was taken during their time together in California and, as you can see, it looks like neither of them has aged since they started bidding on storage units. (Who knew that dust and musty air was so great for the complexion?) The women previously appeared together in a 2016 video where they bravely read comments about them from social media, and it’s hard to believe that one viewer called Mary a “frog-looking alien” and an “anorexic munchkin.” Mary laughed it off, but Brandi had some choice words for the commenter. “Wow, what a d**k,” she said.

After heading back to Texas, Mary continued looking for trash to turn into treasure, like the dried palm leaves that she found on the side of a Dallas street. She sells some of her discoveries on her website, Mary’s Finds, where fans can also purchase her handmade Crusty Plushie toys.

How Mary Padian ended up on Storage Wars 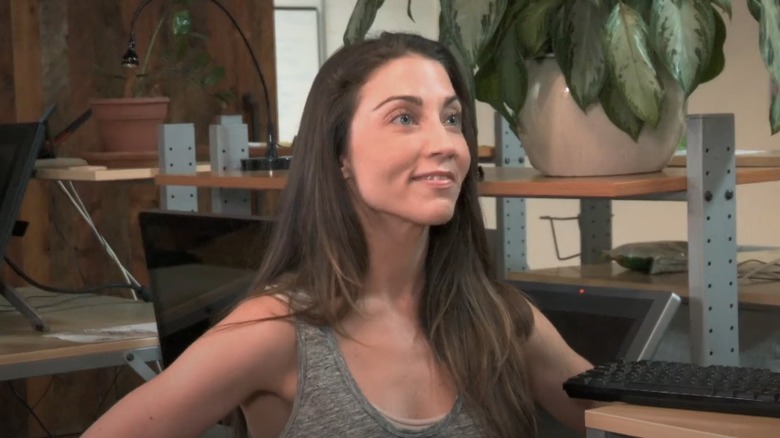 If you are wondering how Mary Padian still looks like she did when she was a college student at the University of Texas, she has dropped her skincare routine: Cetaphil cleanser, Vinter’s Daughter Active Botanical Serum, and EltaMD’s Tinted UV Clear Broad-Spectrum SPF 46 Facial Sunscreen. Speaking of her college days, you might not know that she had a famous roommate. Because she resided with “TODAY” host Jenna Bush Hager when George W. Bush was president, she spent a lot of time around the Secret Service.

According to Mary’s Influencer profile, she got a degree in photojournalism and worked at Architectural Digest in New York City. On the “Fridays with Flea Style” podcast, she revealed that she decided to go back to Texas because her mentor, editor-in-chief Paige Rense, was retiring. Mary had filmed a video series called “Mary’s Finds” for Architectural Digest and decided to open up a store with the same name back in Dallas. Unfortunately, business was not great. “I had no money. I put all my money in that store,” she said. “And I ate peanut butter sandwiches literally for a year.” She was about to close up shop when fate intervened. A “Storage Wars: Texas” producer had been visiting the store owned by cast member Moe Prigoff down the street and just happened to walk into Mary’s store. The producer knew a star when she saw one, and the rest is history.