Currently in NYC? You’d better pay close attention to your surroundings, because the cast of Sex and the City back at work again.

HBO Max has officially revealed that the Sex and the City spinoff series And Just Like That… has started filming in the city that never sleeps. Luckily for us, they also shared a photo of Sarah Jessica Parker, Cynthia Nixon, and Kristin Davis as they strut their stuff on their first day back. 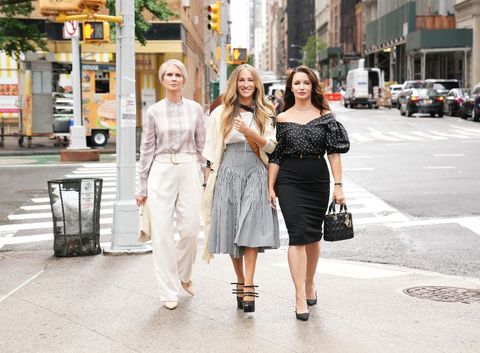 The revival will run for 10 episodes and will also star Sara Ramírez, Chris Noth, Mario Cantone, David Eigenberg, Willie Garson and Evan Handler. There’s no word on whether or not it will serve as a final sendoff for these characters or not but Kim Cattrall, who played Samantha Jones for the show’s entire run and three sequel films, will not be returning to reprise her role after a falling out between her and her co-stars.

The trio previously got together for their first table read back on June 11, according to SJP’s Instagram account.

SJP hinted that filming was set to begin this week in a sneak peek she posted featuring the title of the first episode, “Hello, It’s Me.”

There’s no word on how long filming will run for or an expected release date, but fans should definitely subscribe to HBO Max so they don’t miss out on it once it drops. At least we’re one step closer to seeing (most of) these gals back on our TV screens again!