Despite literally every other show locking down due to the pandemic, The Bachelorette somehow managed to pump out an entire **completely nuts** season by forcing Clare Crawley into a resort with several dozen strangers. What could go wrong, you ask? Apparently everything because Clare quit the show after just two weeks due to falling in love with [SPOILER] and was literally replaced as Bachelorette by Tayshia Adams. This means Clare and Tayshia ended up dating a few of the same dudes—including Bennett “I Went to Harvard” Jordan, who some people think won Tayshia’s season. Here’s what we know about the guy.

A rare sighting of the bachelor specimen emerging to collect needs and provisions after five and a half years of isolation only to discover Brinkley’s has closed.

His ABC Bio Is…So Much

To quote Bennett himself, he hasn’t always been “this successful and good looking”—but he finally ~found himself~ while at Harvard. Wow, how relatable! Bennett also tells ABC that nowadays he’s living in New York, where he “enjoys taking morning yoga classes, walking the Highline in his favorite Belgian loafers [Editor’s note: HELP] and indulging in delicious meals in the city’s best restaurants.”

I really empathize with all of the young parents, who are struggling to get creative with new activities for their kids, these days. When Wilson gets tired of all the catcalls on Perry street, we always try the playground, but they have taken his rims. Luckily, Japanese whiskey, urban camping, and cards always put a smile on his face. #webeswishinsoon

^Wow, it’s almost as if he wants people to know he went to Harvard or something.

Women Love Him, According to Him

Bennett told ABC that his high school girlfriend is the only woman he’s ever had to pursue, and that otherwise “it’s always been women pursuing him.” Love how humble and down to earth he seems!

Kay, so: Bachelor Nation has been speculating that Bennett made it pretty far into Tayshia’s season based on when he re-activated social media (later than other contestants who were likely voted off before him). And on top of that, his current Insta bio reads “Clear Eyes, Full Hearts (+doughnuts and green juice), Can’t Lose.”

Meanwhile, Tayshia posted some donuts to her story, prompting fan account @bachelor.realitea to speculate that this could be a hint he won her season. Though, please note that Bennett didn’t make it into Reality Steve’s final four predictions, soooo. 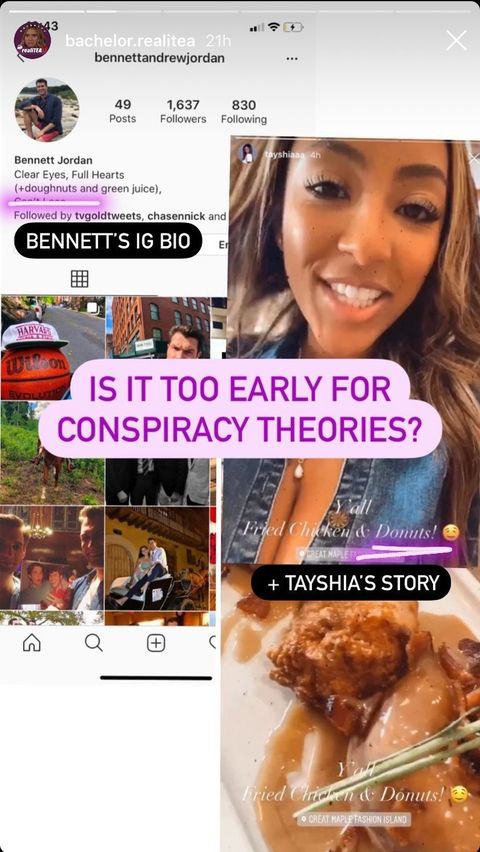 Bennett Jordan has been back online, see Instagram numbers early on in filming and this morning for comparison. He has removed two posts and unfollowed a few people just since Monday (followers and followings didn’t change at the same time/rate so it’s not from deactivations)

That’s about it, but we’ll be updating this with more VERY IMPORTANT INFORMATION soon.