As we wait for the new take on Sabrina, the original cast of Sabrina the Teenage Witch have reunited to mark the show’s 15th anniversary.

EW has made everyone’s day by bringing the cast back together at Stan Lee’s LA Comic Con to look back on the teen comedy gem that ran for seven seasons from 1996 to 2003 (man, we’re old).

“Every actor wants to have that one role that’s iconic, that speaks to people, that people relate to it,” enthused Melissa Joan Hart, whose mother produced the show.

“When fans come to us and say, ‘We grew up with you’, that is the biggest compliment we could ever receive for working hard all those years… It just makes us feel good that so many people enjoyed it and enjoyed our work and what more can you ask for?”

Nick Bakay, who voiced Salem, added that it “owned a generation of girls” with Caroline Rhea, who played Aunt Hilda, saying that the show’s continued legacy is “sort of a miracle”.

Beth Broderick, who played Aunt Zelda, reflected: “I still have young women come up to me and say, ‘You were my childhood, you’re like my second mom. I listened to your advice when I was 9 and you were right’.” 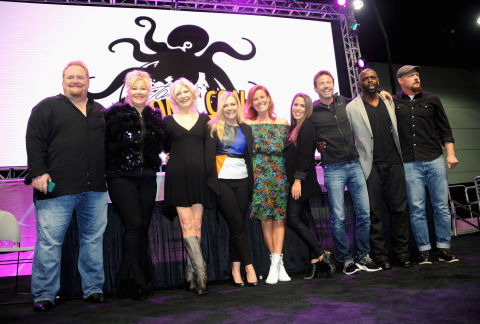 And it seems it’s not just the cast who get people coming up to them to share their memories of how Sabrina affected them.

“The girls who were 10 when they started watching are now in their 30s, and it’s so much fun,” explained creator Nell Scovell.

“Like, if I go to a meeting and someone meets me at the elevator and as we’re walking to her boss’ office she’ll often lean in and say, ‘Oh my god I loved Sabrina.’ And that always makes me feel really happy.”