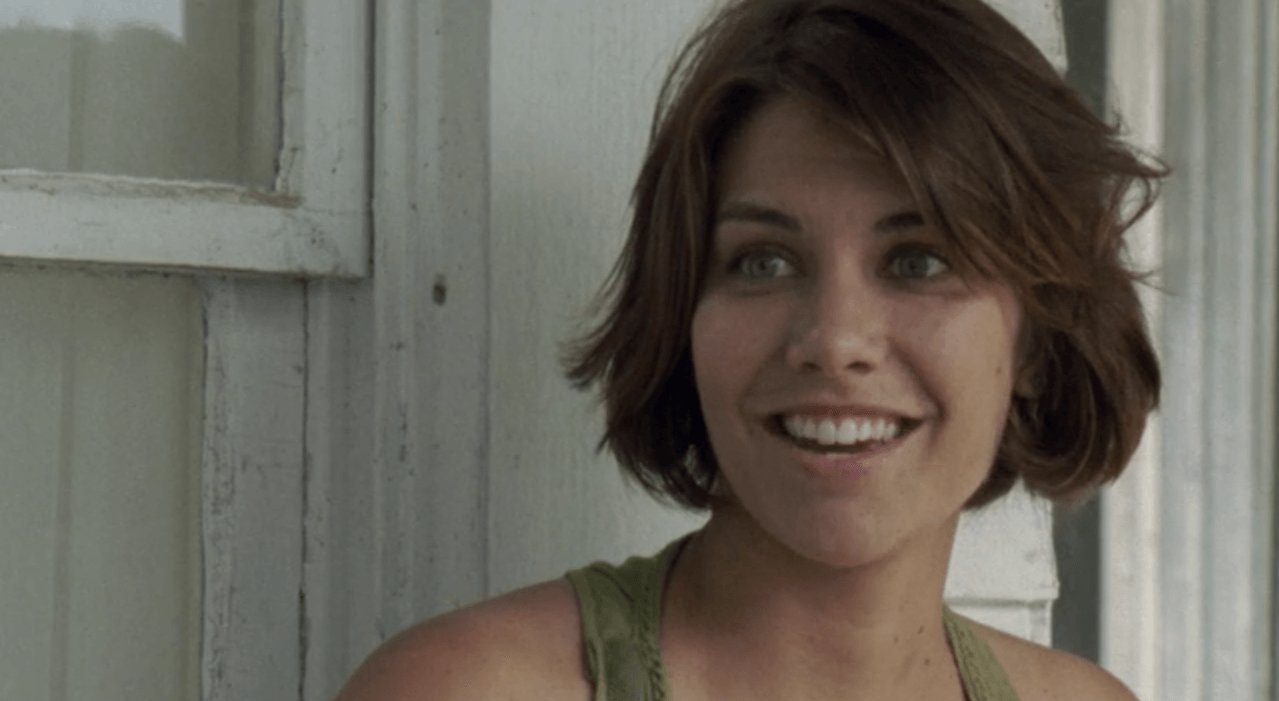 When it comes to The Walking Dead’s core characters, few have been as essential to the series as Maggie Rhee (nee Greene). During her years on the show, she’s grown from a sweet-but-tough farm girl to a resilient woman ready to lead her own team of survivors.

Played with charm and an often-stealthy gravitas by Lauren Cohan, the Maggie of AMC’s TWD makes up a large part of the show’s emotional core. Though we got to know her, at first, as the love interest for Glenn, she quickly developed an identity and importance far beyond her romantic dealings.

In the comics, Maggie’s been every bit as vital to the story’s success. Robert Kirkman first introduced her in Issue 10, and since then she’s been involved in, to some degree, many of the most memorable plot lines in the series. In some ways, the two versions of Maggie have played out very similarly. In other instances, they’ve been very different. Here’s what happens to Maggie Rhee in The Walking Dead comics.

Much like in early Season 2 on AMC’s The Walking Dead, comic readers first met Maggie after Otis accidentally shot Carl. And, similarly, she took to Glenn pretty quickly. She wasn’t shy about letting him know she was lonely — though, they consummated their relationship on the Greene farmhouse porch, rather than on a pharmacy floor.

At first, Maggie seemed to lack the resilience necessary to survive in a post-Apocalyptic world. She showed herself to be, at varying points, insecure, moody, physically slow, and easily shaken by loss. Despite these weaknesses, she stepped up however she could in the early issues and became an essential part of Rick’s group.

After Hershel mistakenly let loose the walkers he had hidden in his barn, two of Maggie’s siblings died in the ensuing chaos. Maggie was wracked with grief, and turned to Glenn for comfort. As the two grew closer, her father grew wary of their relationship. But he eventually came to accept that they had developed deep feelings for one another.

Indeed, much of Maggie’s story in the early Walking Dead comics centered around her relationship with Glenn. After they settled in the prison, they worked together to figure out how to kill the zombies that routinely surrounded their new home. Their relationship weathered some pretty big hurdles. Maggie tried to break up with Glenn after two of her remaining siblings were murdered, because she couldn’t bear to lose him, too.

That trauma served as a turning point for Maggie on a strictly personal level. She killed her siblings’ murderer, Thomas, out of vengeance and seemed to gain a sense of real closure from the act. The new, slightly tougher version of Maggie also cut her hair very short in a symbolic gesture of leaving her old life behind. Glenn, in solidarity, shaved his head, too.

Eventually, Glenn and Maggie decided to make their love for one another official. Though we didn’t get a chance to see their wedding on TV, it played out pretty nicely in the comic series. Hershel presided over their union in the prison cafeteria. Maggie wore an orange jumpsuit as her wedding dress.

It was one of the sweeter and more romantic moments in Kirkman’s story. But their vows to one another were almost instantly put to the test. It wasn’t long before the pair began to routinely face danger. And the threat of potentially losing her spouse at times seemed like too much for Maggie to handle.

Maggie and Sophia at a gravestone | Image Comics

Sophia Peletier has played a considerably larger role in The Walking Dead comics than she did on the series. That’s especially true when it comes to Maggie’s story. The young girl took to Maggie and Glenn after her mother, Carol, committed suicide. Eventually, the two more or less adopted her, even as they struggled to conceive their own child.

With Sophia, the Rhees’ family became larger, and raised the stakes for Maggie’s survival. That doesn’t mean she always had a perfect grasp on the responsibility of being a parent, though. Maggie still had her own demons to face before she could turn her attention to others’ needs. 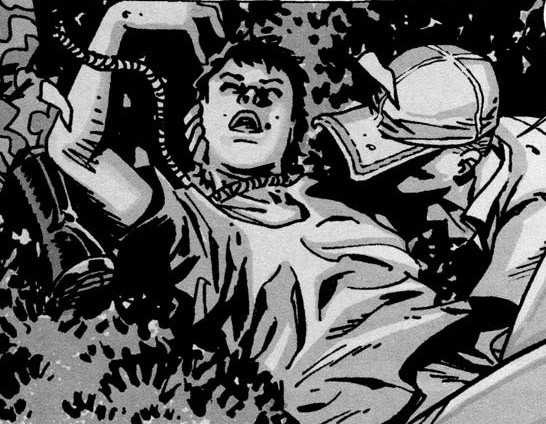 Eventually, like on TV, Rick and his gang tangled with the Governor and his soldiers. Though Hershel didn’t go out exactly like he did on-screen, he was executed during the assault on the prison. So was his son, Billy. When Maggie learned the news, she became seriously depressed. At that point, the death around her became too much, and she attempted suicide by hanging herself.

It didn’t work — Glenn found her and performed CPR, and she eventually woke back up. The incident caused considerable strain on their relationship, but eventually brought them closer. Maggie confessed that despite all the horror around her, she did still want to go on. Sadly, her will to live would soon be tested once again.

After settling into the Alexandria Safe-Zone, Maggie learned she and Glenn had successfully conceived a child. Her husband had concerns over her health, and convinced her to travel to the Hilltop Colony, where she could receive medical care during her pregnancy. Unfortunately, they were ambushed by the Saviors. And, in a scene nearly identical to the unforgettable sequence in the Season 7 premiere, Glenn was bludgeoned to death by Negan.

Unlike in the televised version of this tragic turn of events, in the comics, Maggie was quick to lay the blame for her husband’s death on Rick. However, she eventually came to reconcile with him, and journeyed to the Hilltop with Sophia to make sure Glenn’s legacy lived on.

Maggie talking to members of the Hilltop colony | Image Comics

Glenn’s death didn’t just change Maggie’s future. It also fundamentally altered the way she viewed the world. She became considerably colder, and more willing to stand on her own. And that was particularly true when it came to the Hilltop’s leader, Gregory. She immediately distrusted him, due to his unwillingness to go to war with the Saviors. And she eventually realized that he was not only a poor leader, but dangerous to boot.

Then, she decided to take matters into her own hands. She tried to rally Hilltop to help fight against Negan’s crew, while simultaneously actively fighting against Gregory’s own desires for the group. At one point, as he tried to defend his attempts to help Negan, Maggie put her foot down for good and told him to “shut up.”

In doing so, she truly came into her own as a leader. She further proved her mettle by leading some Hilltop survivors to Alexandria to help Rick fight. By the time it was all said and done, and Negan had been defeated, Maggie had gained her own followers and her rightful place as the Hilltop’s leader.

When the comic series picked up after the war with the Saviors, Maggie had settled into her leadership role. But she still had to contend with some political maneuvering from Gregory and his friends. Eventually, the situation reached a breaking point, and Gregory attempted to poison Maggie. She survived, and Gregory was imprisoned while she debated how to handle his betrayal.

Maggie had Gregory hanged, though she was reluctant to take his punishment that far. She knew that the only way to make sure she, her loved ones, and her people were safe was to send a clear message. After that, she resumed her leadership role, and offered Hilltop’s support to Rick when he needed it.

Recently, the Whisperers — The Walking Dead comics’ newest antagonists — set fire to the Hilltop. Though Maggie managed to survive, the future of her people is, as of yet, uncertain.

Despite all of the death and destruction that Maggie has faced down in The Walking Dead comics, she has seen glimmers of hope. Her son with Glenn was born healthy and strong, and she named him Hershel (for obvious reasons). Her relationship with Sophia has blossomed, and she’s enjoyed watching the young girl grow up and come into her own.

She’s even had the prospect of new romance with fellow Hilltopper, Dante. Though he made his feelings for Maggie known, she let him down gently, stating she only had room in her heart for Glenn. Whether that will always be the case remains to be seen. But between her interpersonal drama and the ongoing war with the Whisperers, it’s clear that Maggie’s story in the Walking Dead comics is far from over.