ONCE Vinnie Jones would have reached for one of the bottles behind the bar where we are sitting to ease the raw grief that is engulfing him.

Now the man who rampaged around the football pitch like an unleashed pitbull confides that he’s seeing a psychologist to help come to terms with losing wife Tanya to cancer. 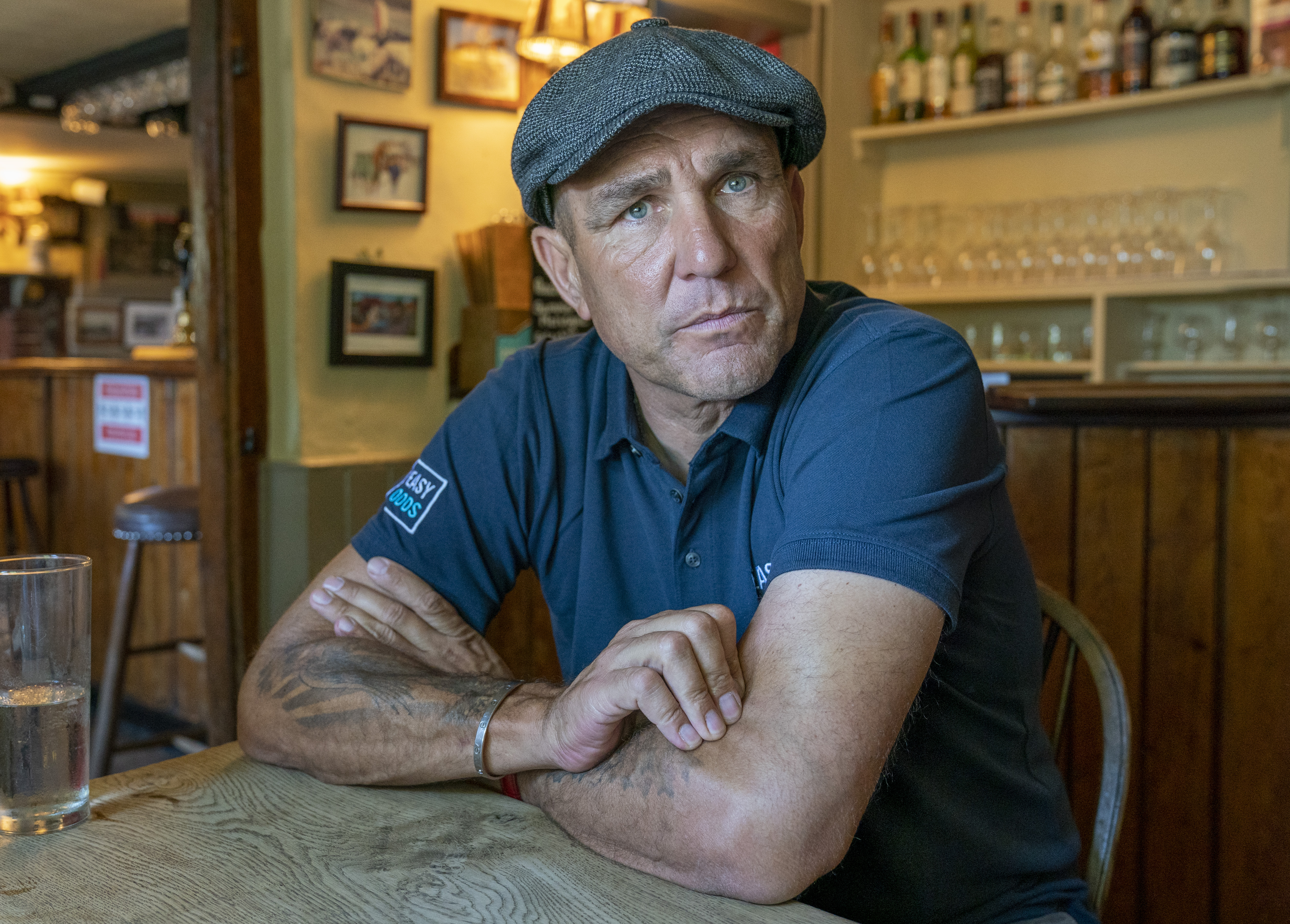 Dry for seven years, Vinnie, 55, who later became a movie star, revealed: “I’m seeing someone three times a week. I thought I was doing OK, and then the anniversaries of Tans’s death and our daughter Kaley’s birthday were approaching and it was like somebody just drained the life out of me.

“It feels like you’re pushing a truck with no petrol from here to Manchester uphill on the M1.”

With the pain of the past year etched into his craggy face, Vinnie went on: “I’ve kind of shut myself away from close friends as well. I don’t know why.

“I watch a movie on TV but just stare through it, I’m not taking it in.” 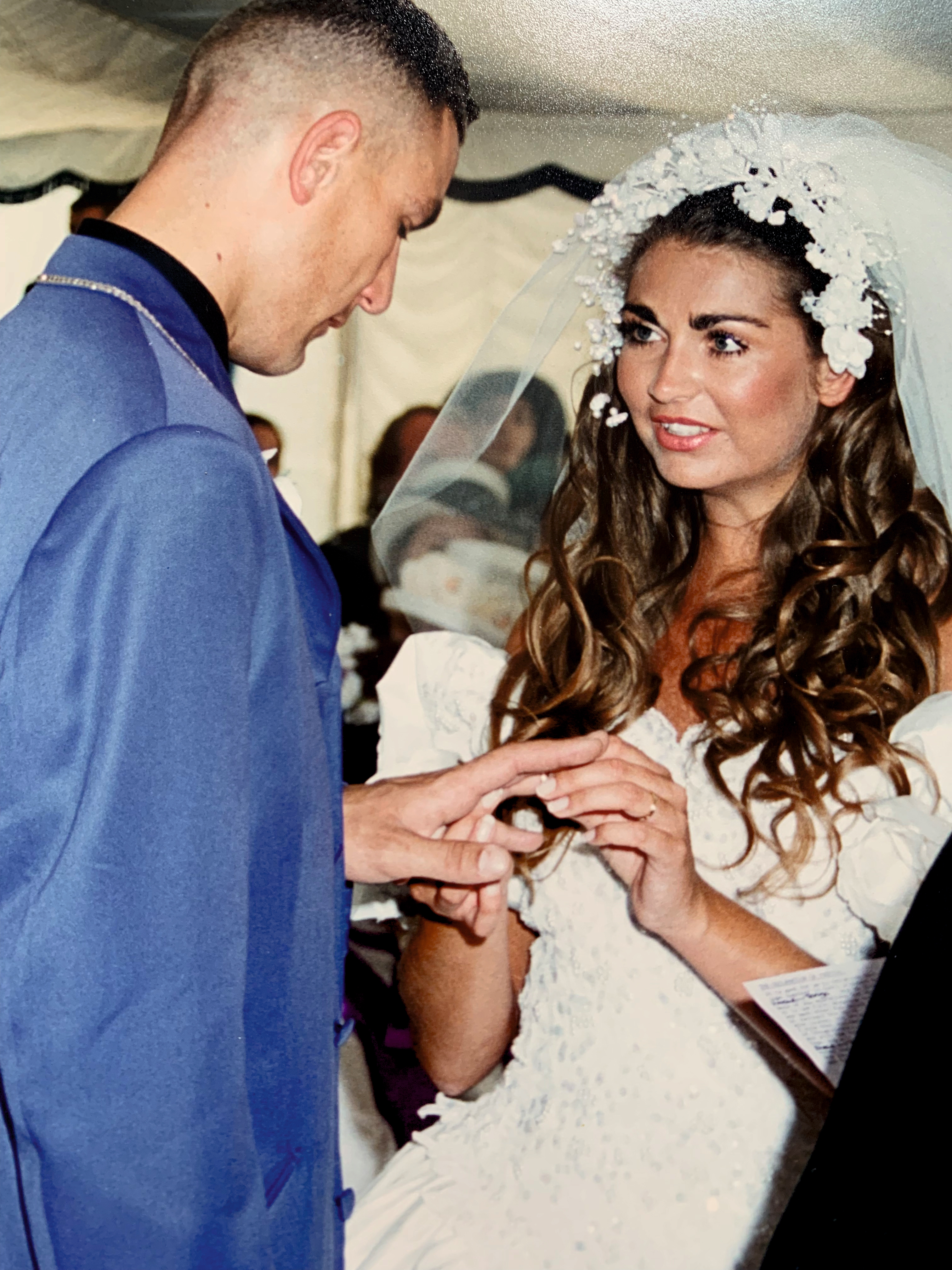 Vinnie’s world collapsed in July 2019 when his “rock” Tanya — who he calls Tans — died from cancer aged just 53.

The couple first met when Vinnie stole a bottle of Tizer for Tanya at a social club in their native Watford when he was just 13 and she was 12.

They reconnected by chance in 1991 when Vinnie — then Chelsea’s midfield enforcer — and Tanya ended up living on the same road in Hemel Hempstead, Herts. They married in 1994.

Tanya had a daughter, Kaley, from her previous marriage and Vinnie a son, Aaron, from another relationship. 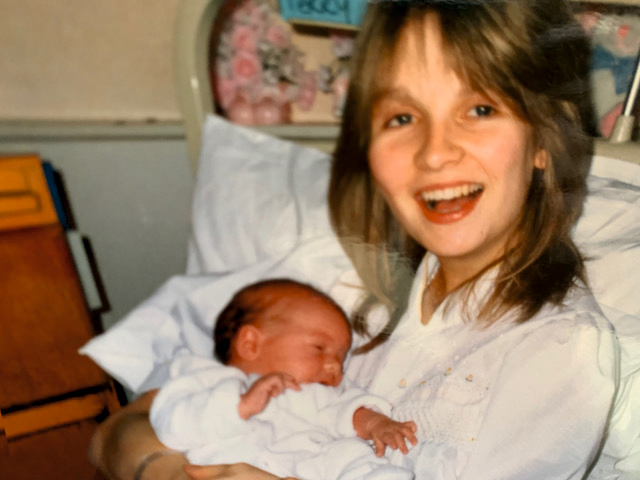 Over the years Tanya remained at Vinnie’s side despite a long catalogue of on-field flare-ups, off-field punch-ups and wild drunken rages.

She adored flawed Vinnie, writing in the last card she gave him: “Something wonderful happens to me every day. It’s being with you.”

We are talking as he prepares to release his new book Lost Without You — a 237-page love story and howl of pain for Tanya — which you can read extracts from in The Sun on Monday.

“I don’t believe you ever move on,” Vinnie tells me. “But I think my life will improve. The tiredness will ease.

Blokes will talk about the girl they slept with last night, but won’t go and talk to a doctor about how they’re feeling

“You get told, ‘When the oil light’s on in your car, you stop and get it checked’. That’s what people have to do when dealing with grief.

"So when the oil light comes on, you have a lie down and give yourself a couple of hours, because otherwise it’s going to break you.

“I would recommend going to see a psychologist 100 per cent. You’re not lying down on a couch as if you’re some lunatic or serial killer.

"Blokes don’t want to talk about it. They’ll talk about the girl they slept with last night, but won’t go and talk to a doctor about how they’re feeling.

“I’m writing this book to try to help others going through the same grief.”

Despite giving up booze, he chooses to meet in the Stag Inn, deep in his beloved Sussex countryside where he moved after selling his Hollywood mansion following Tanya’s death.

Striding through the bar from a back door, he still has that wild glare with steel-blue eyes that look as if they could bore holes through you.

This is the man remembered in FA Cup final history for taking out Liverpool’s Steve McMahon, “just to prove that we didn’t give a s***”. 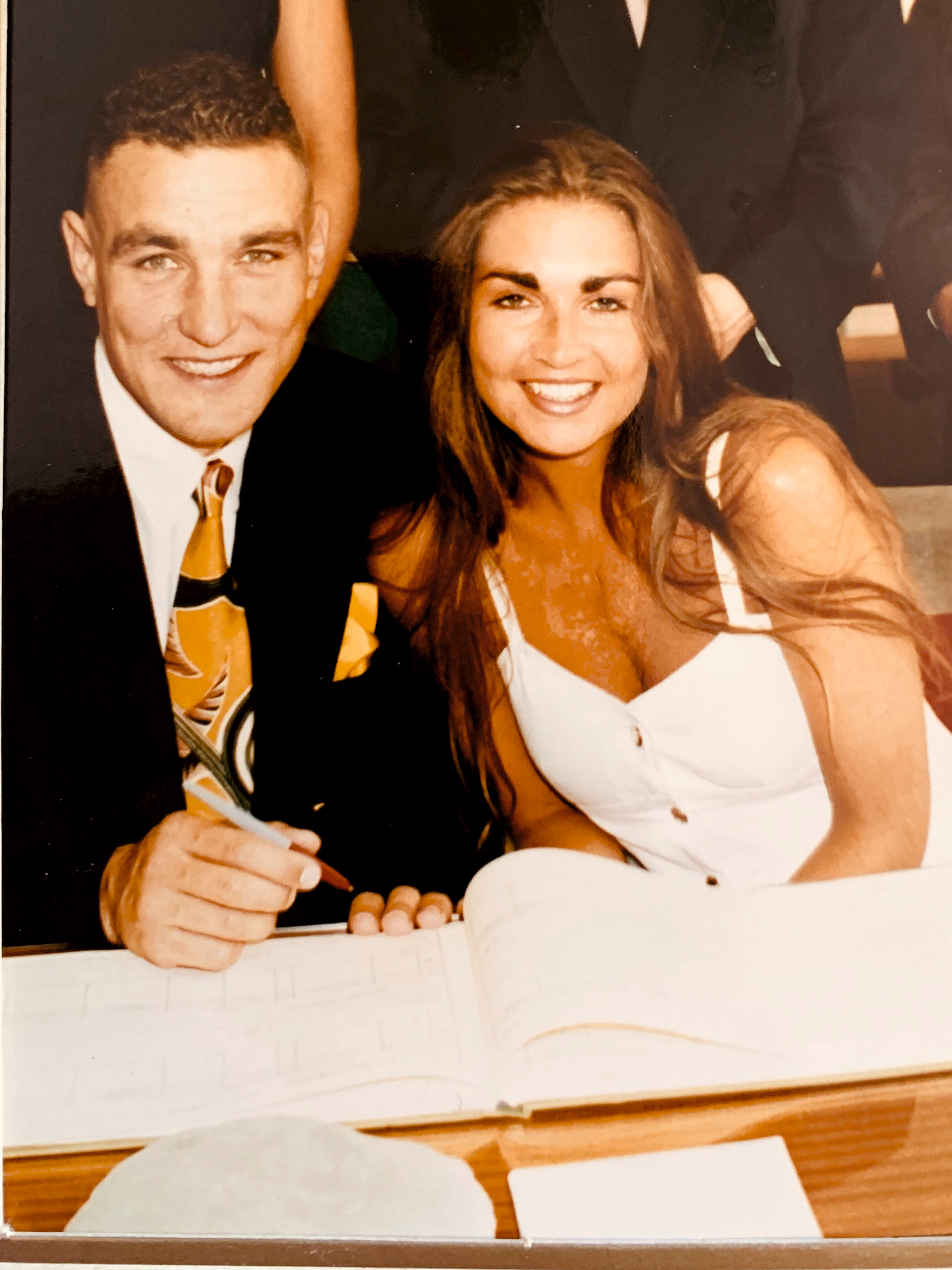 Over the next 90 minutes Vinnie opens up with honesty and surprising tenderness which belies his hardman reputation.

The ex footie enforcer and now a veteran of 105 movies says: “What I’ve learnt with grief management is that you can’t hold it in. It’ll eat you alive. It will destroy you if you don’t let it out.”

He doesn’t believe there will ever be another Mrs Jones, saying: “I’m 99.9 per cent sure I won’t get married again.

"I won the Lottery meeting Tans and still got the ticket to prove it. And that’s what I’ll keep.” 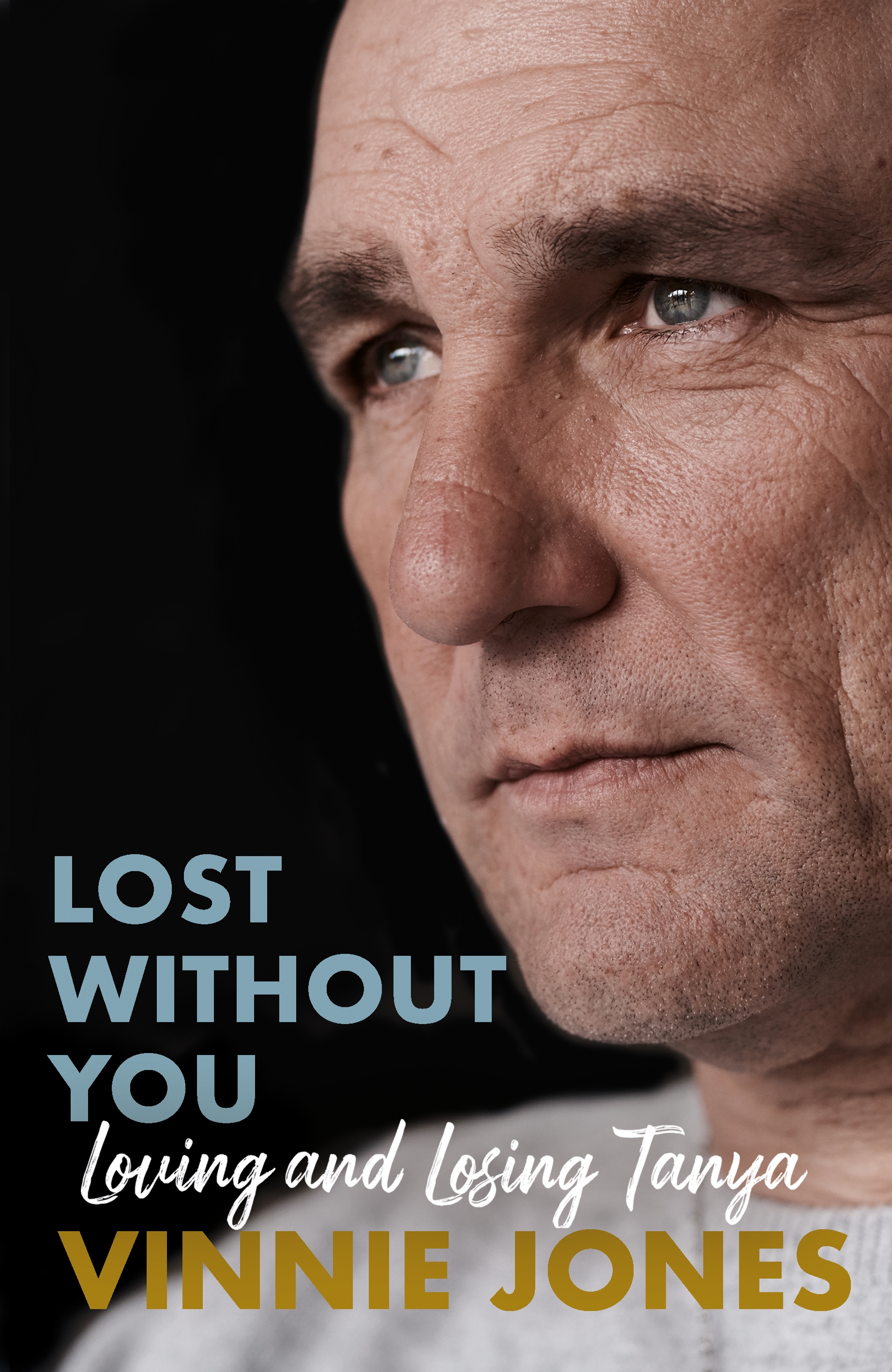 It was while giving birth to Kaley that 21-year-old Tanya’s heart failed.

A transplant followed but the drugs she took to stop the new heart from being rejected left her with a weakened immune system and susceptible to certain cancers.

She later twice had cervical cancer and a partial hysterectomy that meant they couldn’t have children together.

In 2013 they were both diagnosed with skin cancer. Vinnie recovered but Tanya’s body failed to fight it off. It spread to her lungs and brain. 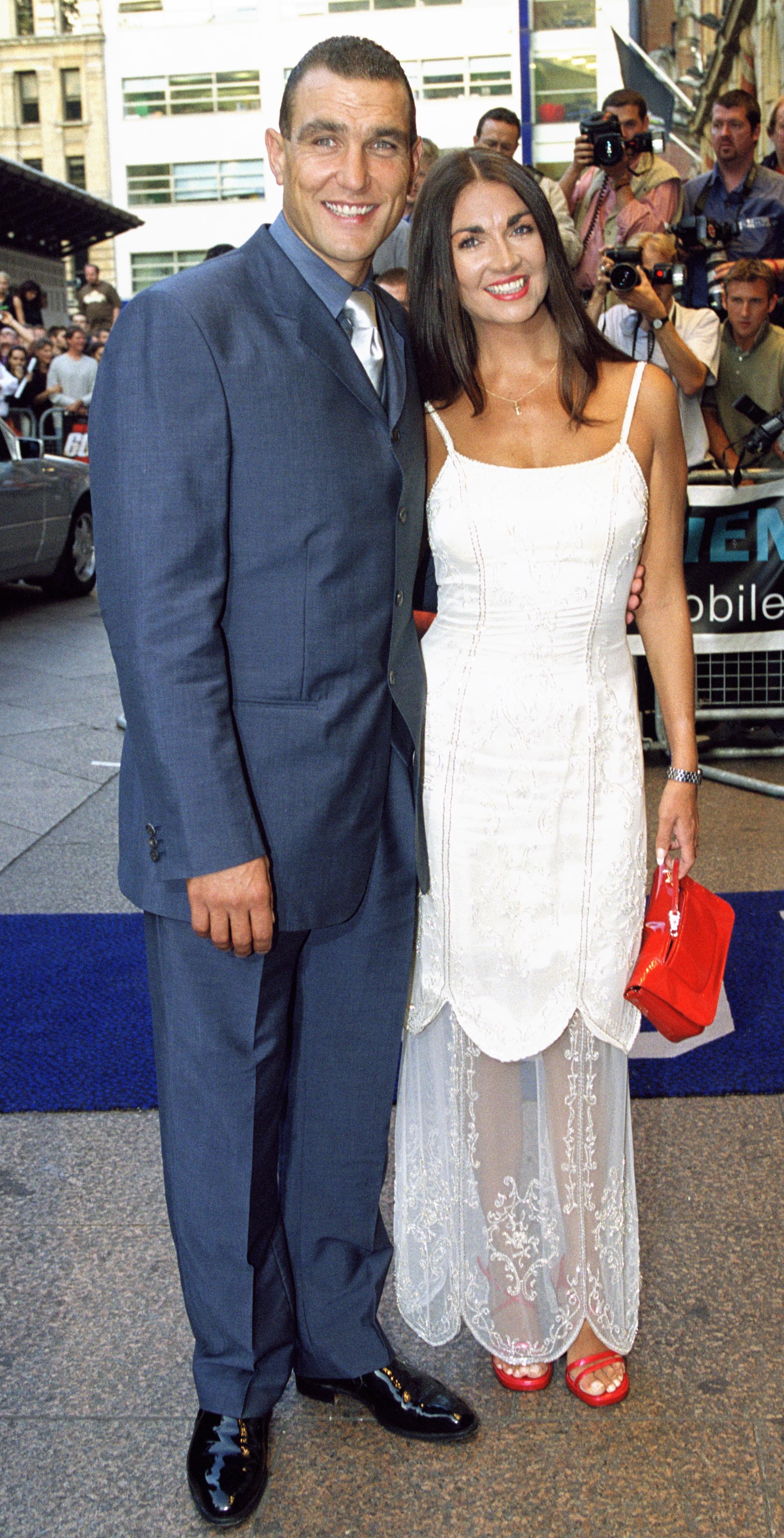 The Snatch star said: “The doctor said, ‘It’s going to be a week, perhaps a month. Years? Probably not’.

“That was the most brutal blow you could ever have.”

A man who used to guzzle champagne, Vinnie hasn’t felt tempted to hit the bottle since losing Tanya.

“Was I an animal on booze? Maybe,” Vinnie admits.

“But the thing is, you start out the evening being nice, charming, funny and everybody loves you.

“I’ve gone to Sandown races and woken up in Dublin and not known how I’ve got there.”

Before going on the wagon Vinnie bit a journalist’s nose in 1995, an incident that led him to take his gun to woods outside his home and contemplate suicide. 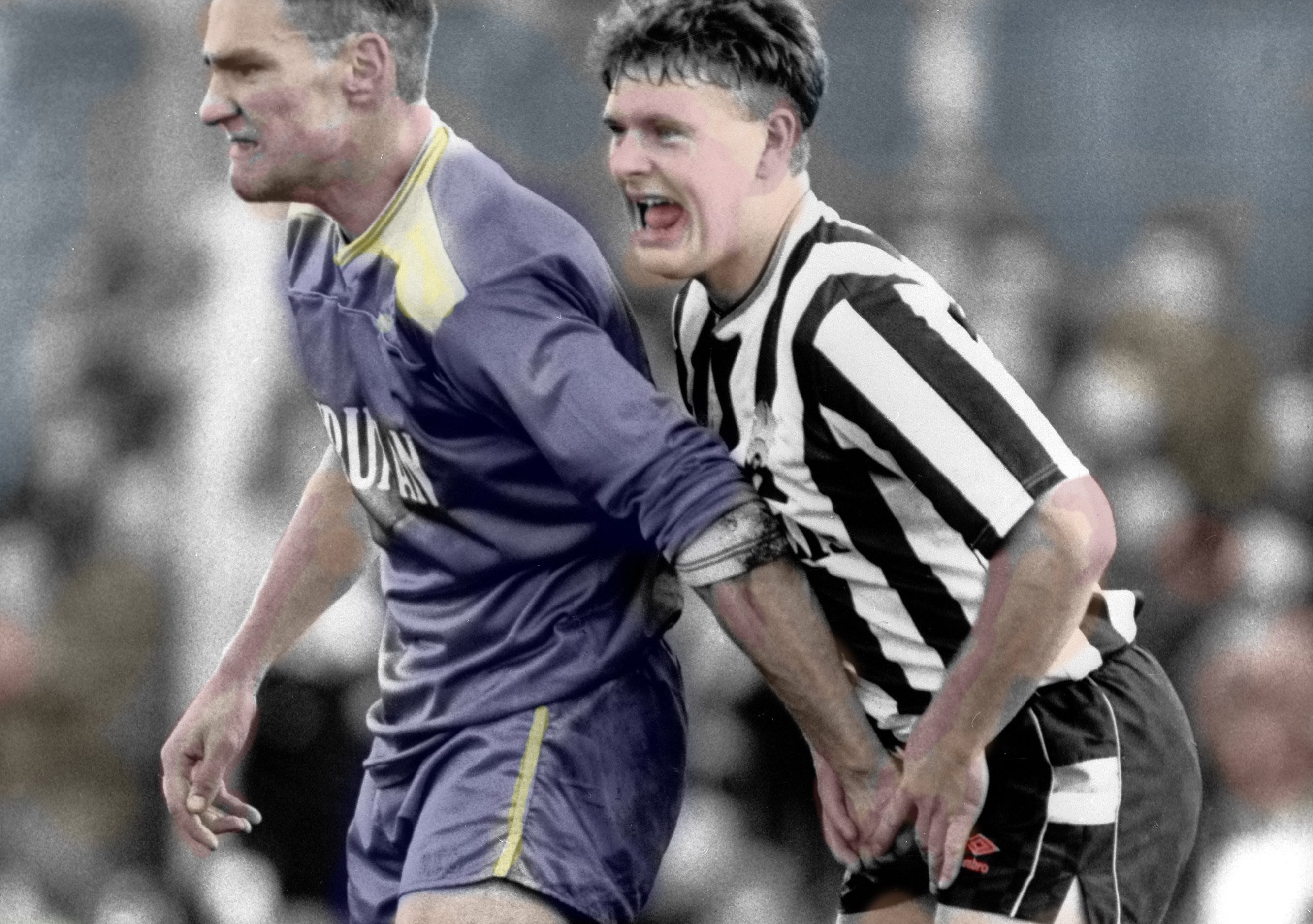 VINNIE remains close to Paul Gascoigne – famously pictured with his testicles in Vinnie’s vice-like grip during a 1988 FA Cup match.

He says the pair have an almost telepathic understanding, with Vinnie being on an emergency list of numbers alcoholic Gazza can call when he is particularly troubled.

Vinnie explains with a smile: “It’s funny. You grab a guy by the nuts and then become great friends.

“We speak often. As much as I can.

“I think I’m more of a safety net for him now, and if things happen, they call me to talk to him.

“He was really bad about three weeks ago.

“I’m on that emergency list of his first three phone calls, which I’m proud of.”

He was also convicted in 1998 of beating up a neighbour in a drunken rage. Then in 2003 he pleaded guilty to an air-rage attack.

After seeking help Vinnie realised he was harbouring pain from his childhood, when his mum walked out of the family home.

“I went to see the psychologist about drink and my anger to get to the bottom of it,” he revealed. 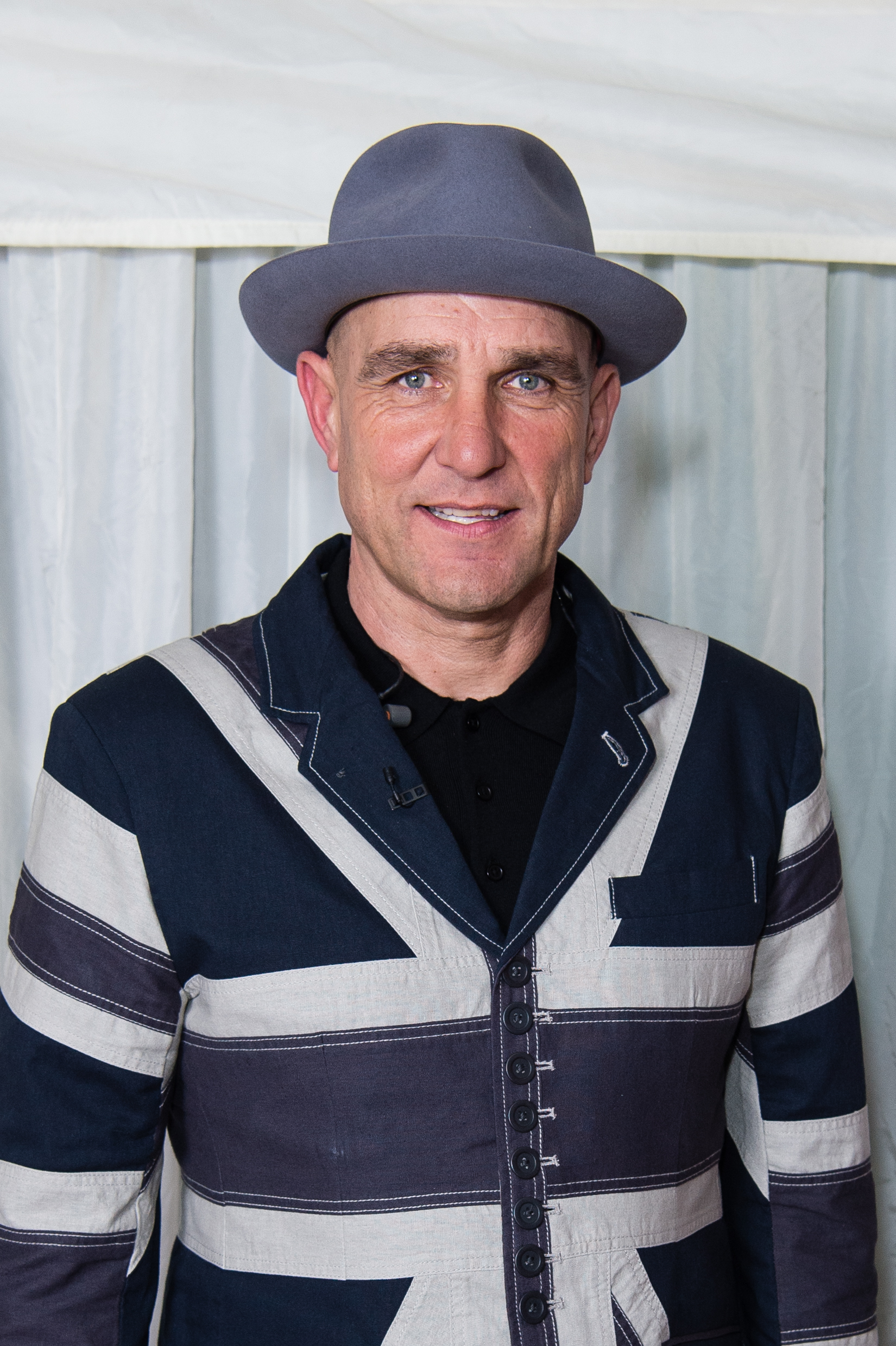 “He said, ‘When did you start drinking?’ ‘Oh, 18 or 19’. I wanted to get my morals back for Tans. The psychologist said to me, ‘Without the booze, your life will get better’. He was right.”

The son of a gamekeeper and born in a Watford bedsit, Vincent Peter Jones was a kitchen porter and hod carrier before graduating from non league Wealdstone to Wimbledon’s FA Cup-winning Crazy Gang.

Vinnie believes current footballers are entitled to their vast pay packets, saying: “Do you think any of my old clubs has called me to say, ‘How are you doing through this grief, Vin? Is there anything we can do to help?’ Not one.

"So every footballer out there, earn as much as you can, as quick as you can, for as long as you can, because there ain’t going to be any phone calls when you need it. 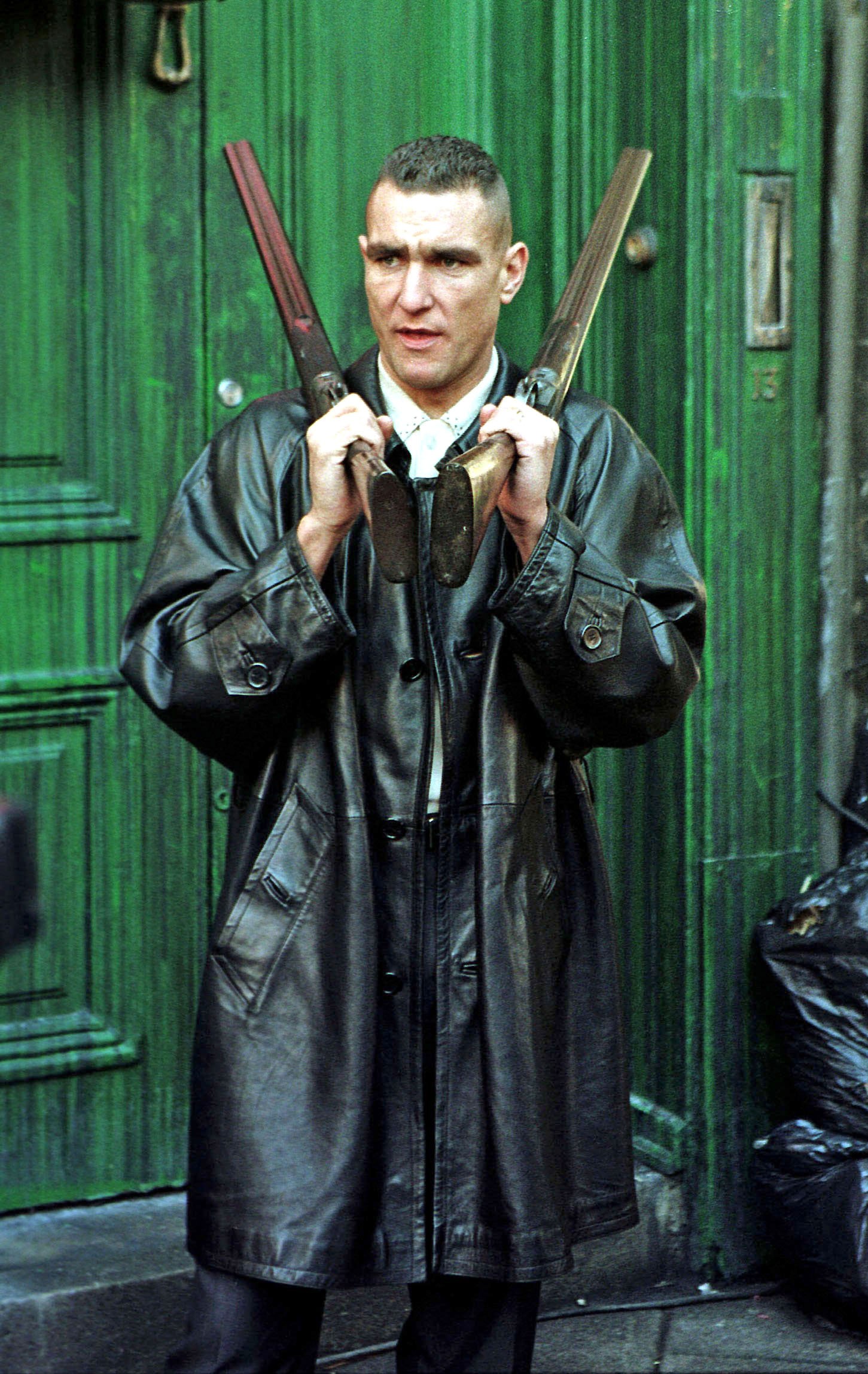 So they deserve everything they get because they’re on the f***ing slagheap at 35.”

Red-carded 12 times in his career, Vinnie was assistant manager at Queens Park Rangers when Guy Ritchie cast him as debt collector Big Chris in the 1998 film Lock, Stock And Two Smoking Barrels.

He said of his Hollywood bid: “It was such a roll of the dice because I don’t think I would’ve got back into football after that. 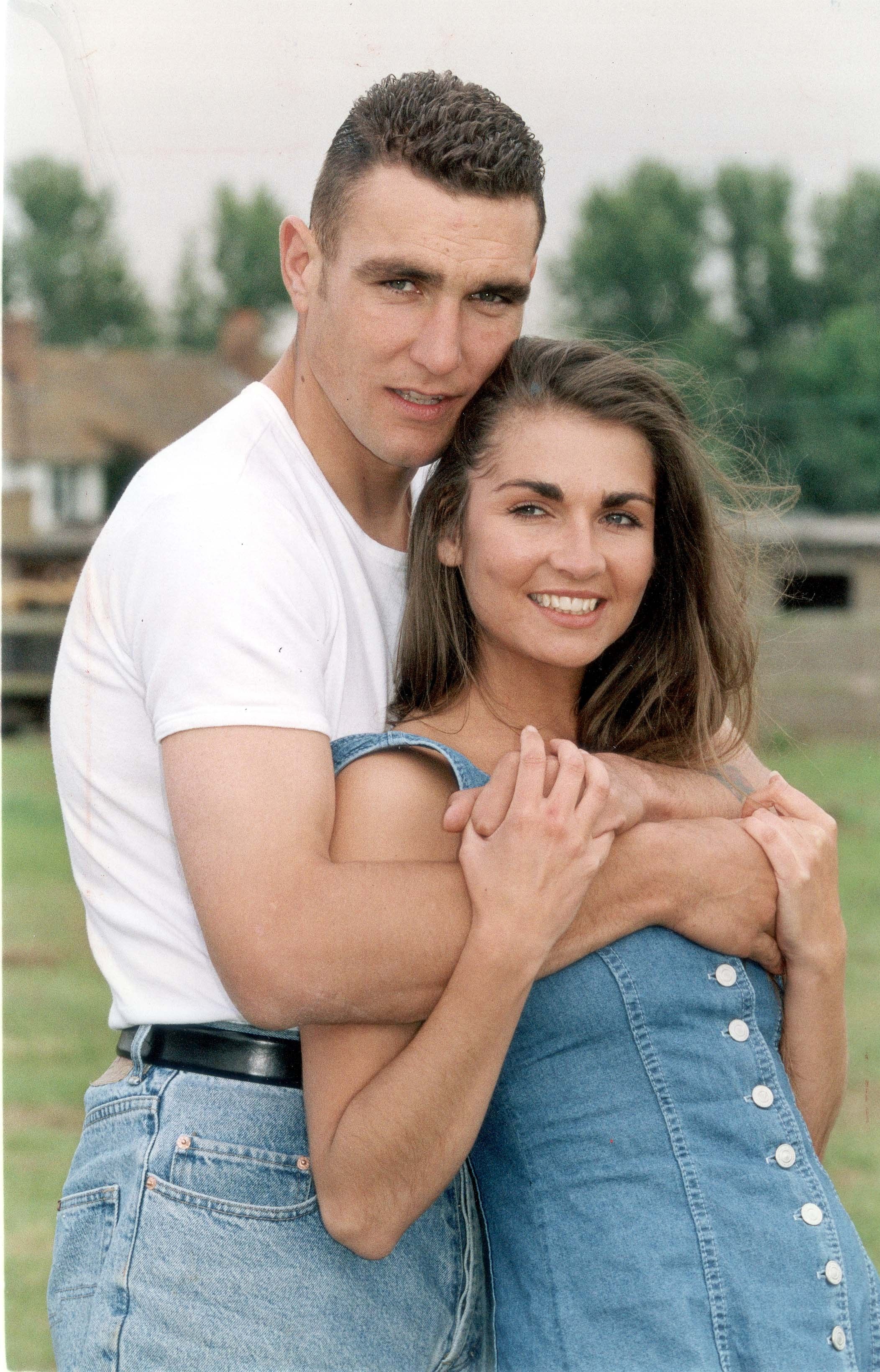 Vinnie still has imaginary conversations with Tanya that give him strength.

He says: “You have to turn the grief into loving grief. It’s about letting stuff go but keeping beautiful memories and beautiful thoughts.

"If it was the other way around I’d want Tans to be happy. But getting through it is a very, very slow process.”

Lost Without You, by Vinnie Jones, published by Seven Dials on September 3, costs £18.99 in hardback. Also available in ebook and audiobook.

Take the voucher printed in Saturday 22 August’s copy of The Sun to a WHSmith High Street store from Thursday, September 3, when the book is published.