As the big screen superhero milieu has only expanded over the last two decades, thanks to sequel after sequel, prequel after prequel, one piece has long been lacking: the really wacky spinoff that exists entirely on its own wavelength. What good is it to make dozens upon dozens of films and not allow any of them to get truly zany? Which was perhaps why Ruben Fleischer’s 2018 smash hit “Venom” was such a welcome surprise, an absolutely bonkers entry into the genre that delighted in seeing its hero dipping into a lobster tank at a swanky restaurant the way other superhero films salivate over city-destroying battles that necessitate the use of multiple good guys in capes. “Venom” was its own thing, finally, even when still hemmed in by its protagonist’s long-time association with Spider-Man (and, thus, the Marvel Cinematic Universe in all its sprawling form).

Fans of Fleischer’s feature will not be at all disappointed by Andy Serkis’s faithful followup, “Venom: Let There Be Carnage,” which sticks to the formula of the first — that formula being, of course, “let star Tom Hardy do whatever he wants, even better if that somehow involves crustaceans” — while also inching ever closer to putting the “lethal protector” into a familiar box. Still, even as Eddie Brock (Hardy) and his alien symbiote BFF (once again delightfully voiced by Hardy) hack their way through both Eddie’s messy personal life and the nutty serial killer who wants nothing more than to end it, it’s hard to shake the sense that the dynamic duo’s best years (and movies) might still be ahead of them.

Picking up quickly after the conclusion of Fleischer’s film and refreshingly free of any sort of backstory catch-up — listen, you’re either in this particular club or you’re not — “Venom: Let There Be Carnage” is zippy from the jump, thanks to a 90-minute running time that not only doesn’t have space for much fat, but even the usual narrative coherence audiences might expect from a big budget studio feature. Instead, Serkis’ film opens with a fast-paced series of flashbacks that opt to introduce us to the horrible origin of serial killer Cletus Kasady, AKA Carnage (Woody Harrelson), who first appeared in the post-credits scenes of the first film. (See? Even this series can’t quite shake the trappings of the modern superhero franchise.)

Opening in 1996, “Venom: Let There Be Carnage” kicks off at a wretched reform school, where young Cletus (Jack Bandeira) and young Shriek (Olumide Olorunfemi) have somehow found love amongst the wreckage of their ruined childhoods. As the pair pledge their lives to each other, Shriek (played in her later years by Naomie Harris) is in the process of being shunted off somewhere else, somewhere better suited for someone of her condition (read: super-villainous, capable of shrieking in ways that stun, maim, maybe even kill). Serkis, a maestro of CGI and effects wizardry, lets us know he’s in on the gag early: while it’s clear even to the uninitiated who these two youngsters are playing, the filmmaker has opted to dub their voices with Harrelson and Harris. Oh, Andy! 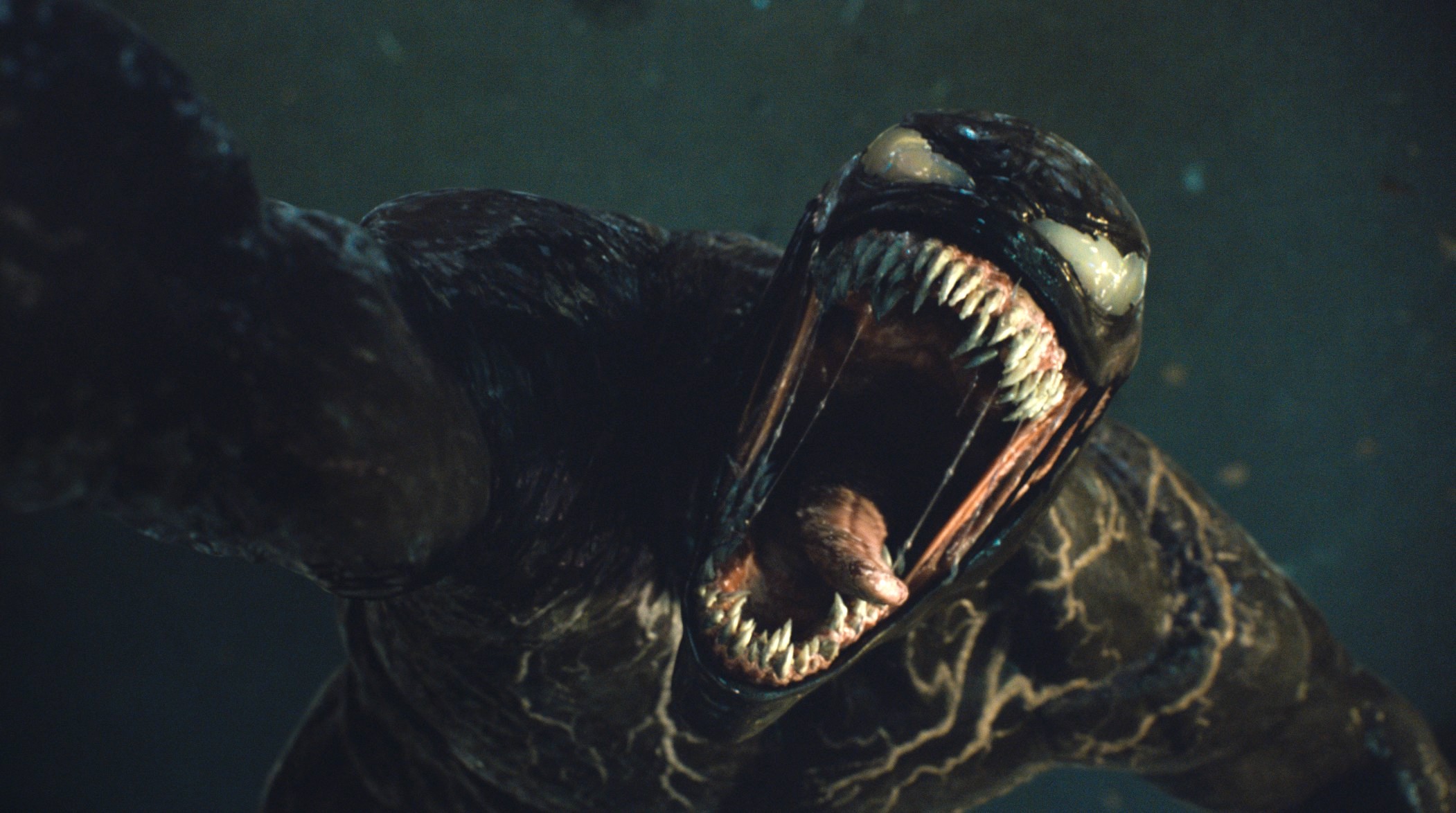 “Venom: Let There Be Carnage”

In the present day, Shriek has long been confined to the Ravencroft Institute for the Criminally Insane (a Marvel mainstay, now apparently transplanted to the West Coast) after assaulting a young cop (Stephen Graham takes over as the older Detective Mulligan) during her ill-fated transfer so many years ago. Things aren’t much better for Cletus: he’s in San Quentin, the death penalty hanging over his head after killing scores of people.

As for Eddie and Venom, they’ve found a tenuous sort-of happiness, with Serkis and Hardy leaning hard into the buddy comedy angle that made “Venom” such a treat. Eddie is still attempting to re-establish his now-tarnished journalism career — something an exclusive interview with Cletus seems destined to correct — while keeping Venom, all id and wise cracks, from going truly, totally nutso. The rules of their household are simple: no eating people. Venom can’t totally jive with that, but Hardy has a blast playing these very different two characters, as prodigious CGI (the best of the film, which is otherwise muddy and messy) allows Venom to spring from Eddie’s body at random, taking it over as he sees fit.

After a particularly unnerving visit to Cletus in the clink, Eddie and Venom manage to crack the mystery of the many missing bodies the killer has left in his wake — Venom, it most be noted, is super-smart and in possession of a wonderful memory — giving Eddie a major scoop and ensuring that Cletus is bound for lethal injection. One last visit to Cletus binds the duo (trio?) to each other forever, as Cletus takes a bite out of Eddie and, oopsie, finds himself poisoned with Eddie and Venom’s twinned blood. Suddenly, Carnage isn’t just a natty nickname, it’s a whole new being: Cletus, like Eddie before him, is now the host for a deeply pissed off alien symbiote, one even more intent on chewing up humans than Venom himself. 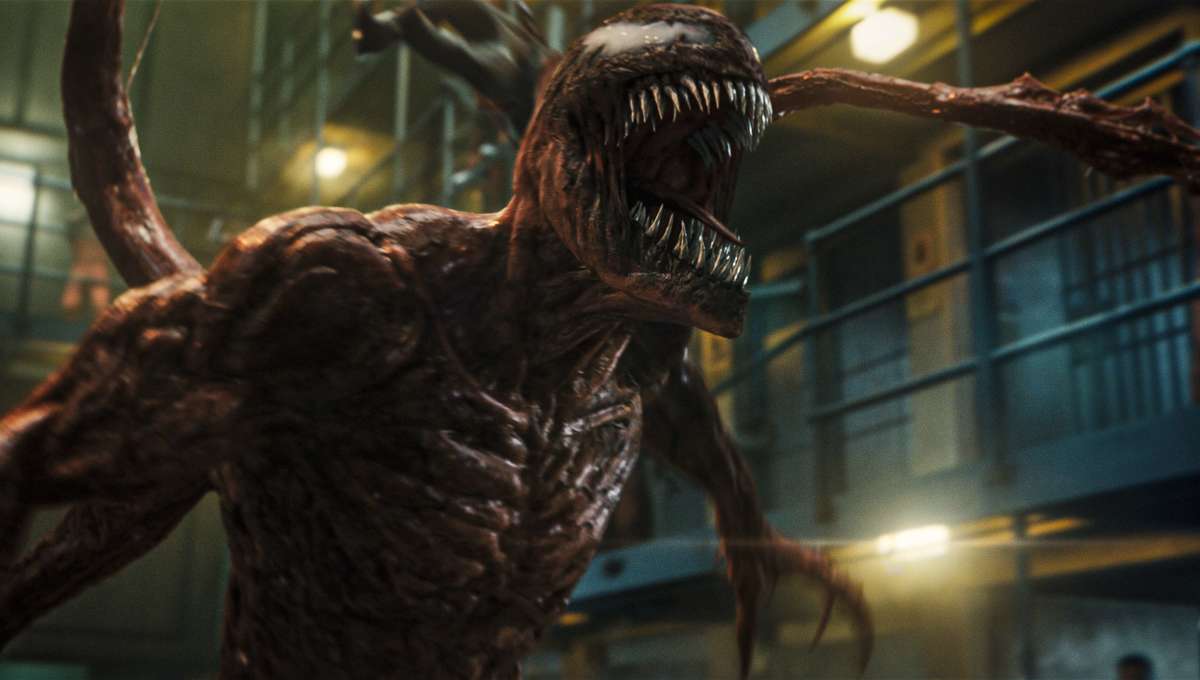 “Venom: Let There Be Carnage”

As tensions rise, Eddie and Venom engage in a (mostly understandable) blowout fight, with the pair splitting — both physically and emotionally — in an event hilariously coded as, well, a breakup. Meanwhile, Carnage (and Cletus) are busting out of prison, intent on finding Shriek and taking serious revenge on all the people who have hurt them. It’s a lot of material, but Kelly Marcel’s script flies right over it, all the better to spend time with the more raucous of plot movements (like Venom going to… a rave?) and wacky subplots (Michelle Williams continues to turn in phenomenally funny work as Eddie’s ex-fiancee Anne, who both he and Venom are still very hung up on).

Inevitably, all of these disparate characters, the human and the alien, the enjoyable and the boring, will find themselves forced together for one last bombastic battle, all flailing alien symbiote limbs and Harris-issued screams. Entire buildings fall and there’s not a goddamn lobster to be seen, but Hardy has perhaps more fun than anyone has in the last dozen or so MCU outings, and that infectious glee is enough to keep the entire thing moving right along. No other big budget superhero franchise has gone so totally whole-hog on genuine comedy than “Venom,” and while the meat of the story sounds terrifying — alien symbiotes? a serial killer with superpowers? a hero who likes to eat people? — there’s hardly a heavy moment in the entire film. It is all very, very funny, but it’s also very, very silly.

Which is not to imply that’s not welcome; it is, perhaps even more so than its predecessor, which tried to build in the kind of “necessary” backstory and motivations that “Venom: Let There Be Carnage” mostly eschews. “Venom: Let There Be Carnage” is at its best — and its most unique, amusing, and fresh — when it’s tossing out those expectations and letting its freak flag fly. There doesn’t need to be carnage (or, hell, even Carnage), there just needs to be Venom, and more of it.

Sony Pictures will release “Venom: Let There Be Carnage” in theaters on Friday, October 1.

As new movies open in theaters during the COVID-19 pandemic, IndieWire will continue to review them whenever possible. We encourage readers to follow the safety precautions provided by CDC and health authorities. Additionally, our coverage will provide alternative viewing options whenever they are available.