The Eurovision 2018 grand finale took a turn for the dramatic earlier this evening (May 12) after SuRie’s performance was unfortunately interrupted by a stage invader.

The UK Eurovision entry was about two-thirds of the way through her song ‘Storm’ when an unknown man came on stage and grabbed her mic.

While what he said was incomprehensible, he was quickly taken off by security and SuRie continued with the rest of the performance like a trooper.

Viewers were quick to notice the incident, and praised the singer for her professionalism and continuing her performance despite the circumstances:

And perhaps the best reaction of all came from Australia’s TV commentator Joel Creasy, who called the invader “some absolute cockhead”.

Can’t argue with that, really.

After the incident, SuRie was actually offered the chance to perform her song all over again without interruption, but seeing as she aced it despite the incident, she declined.

“SuRie was offered the option to perform again by the EBU,” her people confirmed to the Beeb.

“SuRie and her team are extremely proud of her performance and have together decided that there is absolutely no reason to perform the song again.”

The same thing happened back in 2010, when Spain’s performance was interrupted and they too declined the offer of a do-over.

As for the perp… he’s banged up in police custody.

TV compere Graham Norton praised the singer for performing through the interruption, saying: “What a dramatic turn of events and the UK, but she coped so well.

“I’m in awe of her, she just carried on and used it to her advantage. Really terrific job from SuRie.” 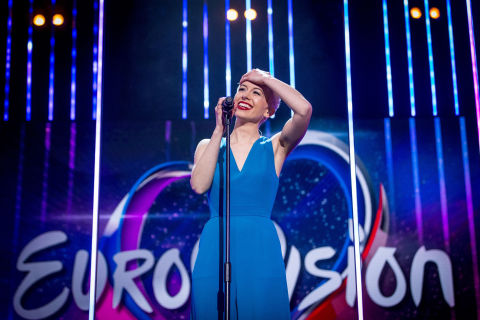 You can catch up with all the action on tonight’s Eurovision in our live blog, which is being updated as the night rolls along.

We also have loads of great Eurovision content for you, including a gallery compilation of every single Eurovision winner since 1956.

The Eurovision Song Contest is airing on BBC One and live streaming on YouTube.