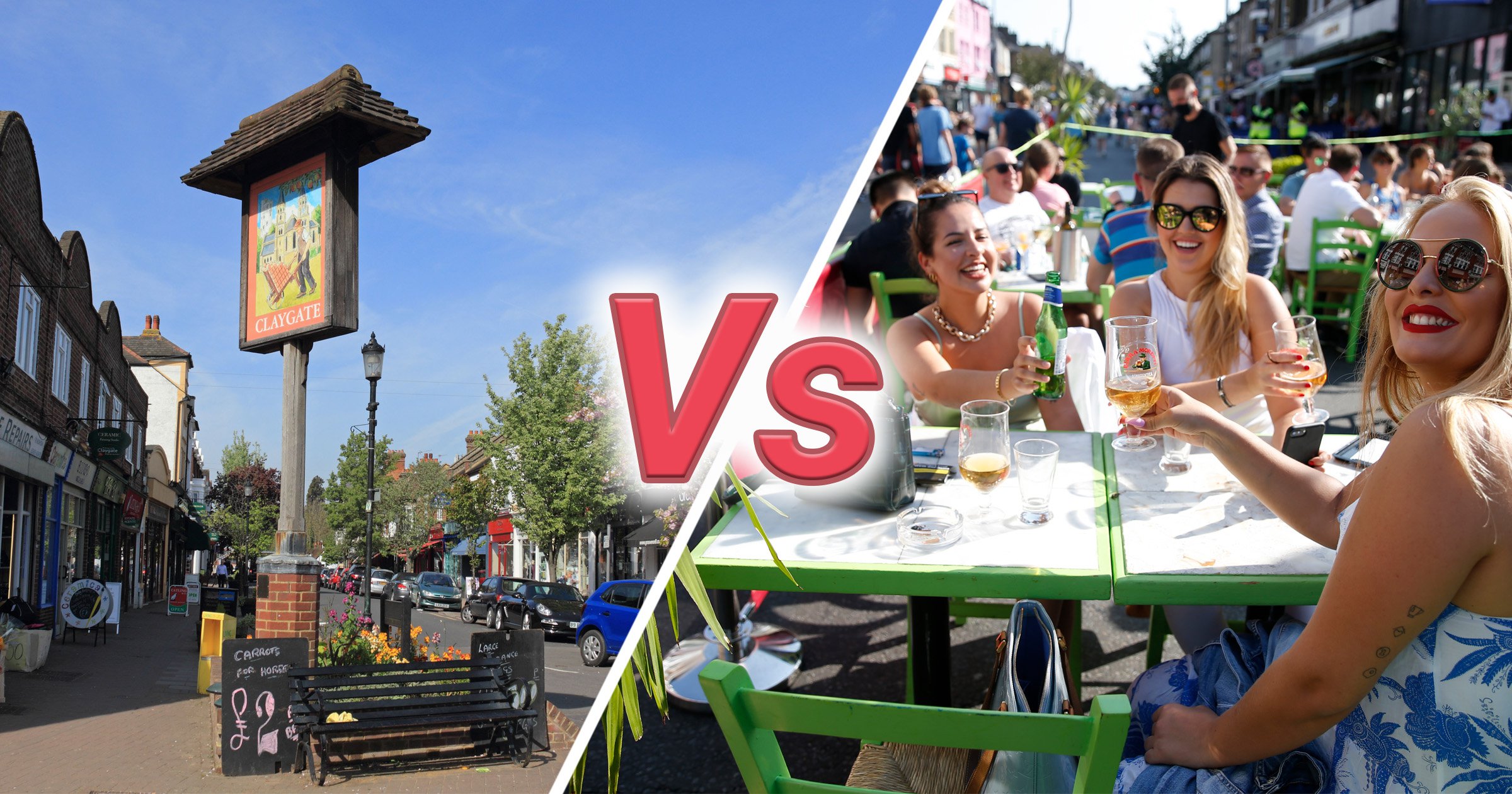 Clapham’s critics call it the south-west London bastion of beige, but in city living polls its well-heeled residents regularly vote it a fantastic place to live — with great eateries, nightlife spots and rail connections.

It spans several neighbourhoods, taking in arty Clapham North, period-perfect Clapham Old Town, the 220-acre green heartland of Clapham Common and the upscale but laidback vibe of Abbeville Village (the fromagerie says it all), with its broad streets lined with attractive period semis, mansion blocks and new developments.

‘The local property market has seen high and consistent demand over the years, with buyer demographics ranging from first-time buyers to families already living in the area looking to upsize,’ Rory Crawford-Drake, a director at Dexters, says.

‘Expect to pay from £450,000 for a renovated one-bed flat and up to £3.5million for a detached five-bed family home around Clapham Common.’

But many south-west Londoners also choose to take the classic emigration route to Surrey’s commuter villages.

Pretty, family-oriented Claygate, for example, just 14 miles away, off the A3, and offering a 35-minute direct train link into London Waterloo, centres on a historic conservation area with a village green and a parade of independent shops.

Admittedly, it’s sedate, but quirky offerings such as micropub Brightwater Brewery Platform 3 and a burgeoning restaurant scene make it anything but dull.

There’s not a lot of housing stock up for grabs at any one time, so properties tend to sell quickly, but a one-bedroom flat near the station costs from about £335,000, and a modern three-bedroom terraced house from about £420,000 — which means the relative value gap between here and many London locations allows for a significant upsize.

‘I moved from London to Claygate because it truly offers the best of both worlds,’ says Tilly Balfe, 26, a consultant at Maison.

‘I am surrounded by beautiful countryside with gorgeous spots like Box Hill on my doorstep, yet city life is only a short train ride away. Claygate packs a punch when it comes to offering just about everything you could want or ask for in one village.’

The private roof terrace, with its glass balustrading, firepit and views across London is the standout feature of this two-storey two-bed flat near both Clapham and Wandsworth Commons.

The 930sq ft of interiors aren’t too shabby either — there’s an open-plan kitchen/reception space (the kitchen has an expansive, freestanding island) and hardwood floors throughout, plus the main bedroom has floor-to-ceiling glazing with amazing views.

Check it out via Savills

Clapham: The low down

Nip out for a pint: Try the Railway Tavern, The Bobbin, or popular indie The King & Co

Crime: Antisocial behaviour and violent and sexual offences were by far the most common crimes in July

Schools: Clapham Manor primary school is rated Outstanding by Ofsted; there’s also a Steiner school nearby, for ages three to 14, for a more creative approach to learning, plus several excellent independents in the area

What does the future hold? Clapham Junction — famously one of the busiest stations in the UK — could be set for a much-needed redevelopment

This semi-detached three-bed house is in walking distance of the station and Claygate Primary School.

Immaculately renovated and extended, it has a spacious entrance hall and a sprawling ground floor kitchen/dining/living space, with full-width sliding doors opening onto the garden.

Quartz kitchen worktops, underfloor heating throughout the ground floor and a luxurious family bathroom means its new owners won’t need to do a thing.

Check it out via Matthew Pierce

Nip out for a pint: Make for The Hare & Hounds on the village green, or a cocktail in The Foley’s pretty beer garden

Nearest supermarket: There’s a local Co-Op, plus two Waitrose stores and a Lidl within a 15-minute drive

Crime: There were 67 crimes reported in Esher & Claygate in July

Schools: There’s a Montessori pre-school in Claygate, and nearby primary Esher Church School is rated Good by Ofsted; for secondaries, Esher High is well regarded by local families

Have the best of both worlds

Near the buzzing Clapham Old Town, this two-bed first-floor flat is in stately Elmhurst Mansions, on Edgeley Road, SW4.

It’s packed with period features — the sitting room has a bay window and its original fireplace — and beyond the roomy kitchen you’ll find the second bedroom and a terrace.

Several stations are within walking distance, as are Clapham Picturehouse and lots of bars, clubs and restaurants.

The Old Bank, on the shopping parade on Hare Lane in the centre of Claygate village, is a commercial building developed into nine high-spec one and two-bed apartments.

A one-bed apartment here with sash windows and pale engineered wooden floorboards costs £350,000, and a two-bedder £535,000.

Commuter? The building is just moments from the station, as well as the local pubs, cafés and tennis club.