Iris (played by Aliyah Royale) has undergone quite the journey so far on The Walking Dead: World Beyond, joining forces with sister Hope (Alexa Mansour) to ditch their safe haven behind fortified walls in a quest to discover what really has happened to their father. Of course, the journey has been packed full of obstacles along the way, from undead Empties to the threat of CRM’s wicked leader Elizabeth (Julia Ormond). However, despite the drama unfolding on-screen, AMC viewers have been wondering throughout just how World Beyond fits into the TWD universe and if any recognisable faces will pop up.

And Express.co.uk brought this up in a recent interview with Royale – asking about possible cameos from the likes of Rick Grimes (Andrew Lincoln) to Negan (Jeffrey Dean Morgan).

She continued: “I love the complexity of villains. They’re just so interesting. The way that they can be given the same set of choices that we’re given and make a completely different and possibly horrid decision.

“I love watching that. It’s entertaining to me. You know, it’s like, who’s good? Who’s evil? And how do we all change in the way? Yeah, so definitely Negan.” 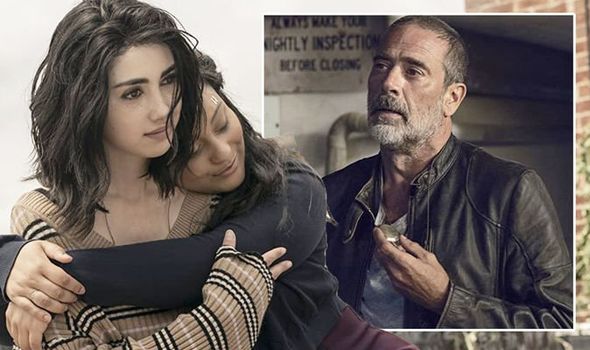 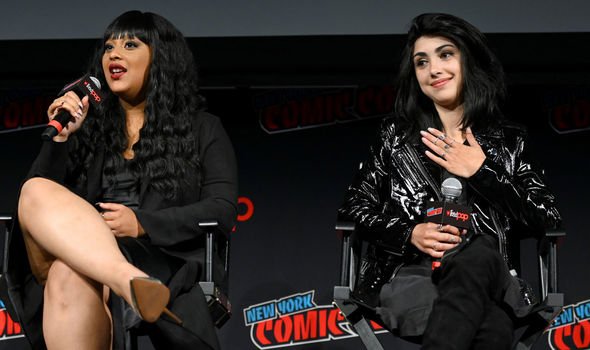 The World Beyond star added: “I was terrified of the series for a really long time. I was like nine or 10 when it first came out. So I was terrified of Walkers of the undead, they haunted my dreams. It’s crazy to do a 360, and be actually living in that world now.”

And when asked if she’d got to meet Morgan, the man behind the bat-wielding former Saviour, Royale couldn’t help but gush over their first encounter – and hinting at possibly working with him in the near future.

“We were backstage for 2019 at Comic-Con,” she detailed. “Because the Walking Dead panel one on first and then our panel went on.

“And I remember just being in this waiting room, this green room with all of them and I just I was like, ‘Oh, my God, that’s Jeffrey Dean Morgan.’ 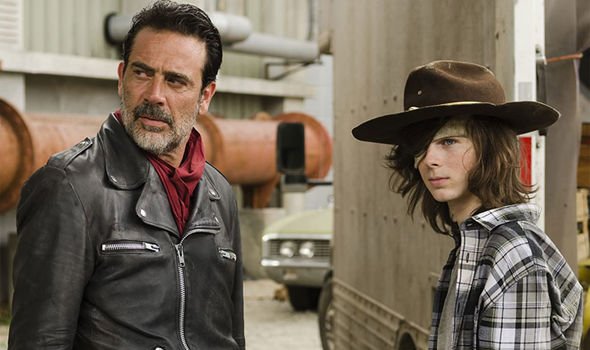 “I think it was Scott Gimple, the creator, who’s like, ‘Do you wanna meet Jeffrey Dean Morgan?’ And I was like, ‘Are you joking?’

“He was like, ‘it’s another day’, and it calmed my jitters before I went out on that stage.”

Royale concluded: “He is great. And I’d love to work with Negan, for sure. He’s great, yeah.”

With Royale making it clear Negan’s the man she’d like to see Iris come up against, could we see a shock appearance in World Beyond?

So with him the preferred choice for World Beyond’s leading star – fans will have to watch this space to see Royale’s wishes come true.

Besides a possible Negan encounter, however, there’s also the not-so-small matter of a potential Rick appearance in the AMC spin-off.

Despite making it clear she was unable to go into detail about any return for Rick – “That is the one Easter egg, the one thing that I could never open up about,” – Royale did hint she was “looking forward” to his return to the TWD universe.

“You know, you gotta keep watching,” Royale teased. “He’s King of The Walking Dead, a fan-favourite,

“And we look forward to his appearance as well, you know.”

So who knows, could a Rick and Negan face-off come to fruition in World Beyond? There’s a number of hints to suggest so.

The Walking Dead: World Beyond continues Sunday on AMC in the USA and Friday on Amazon Prime Video in the UK.

IT can’t have been easy for Meghan to write her searingly honest and heartbreaking account of going through the agony of miscarriage. She and Harry…