And then there were two… and now there are three again! Monday’s episode of The Bachelorette was full of ups and downs, as just after contestant Brendan Morais self-eliminated before fantasy suites, castoff Ben Smith returned to tell Tayshia Adams he was in love with her.

The Army veteran was previously eliminated at final four, unable to tell Tayshia about his feelings for her during their “hometown” date. He returned on Monday’s episode, surprising Tayshia at her suite just before her rose ceremony (where she seemingly would have just told Ivan Hall and Zac Clark they were moving on, since they were the only men left).

“I know I’m supposed to be long gone, and I know you sent me home already, but the way that that ended, I was so completely caught off guard, I just didn’t even know what to do or say. And I’m sorry for that,” Ben told Tayshia, who was clearly shocked by his arrival.

The Bachelorette had brought up Ben in a conversation with Rachel Lindsay earlier in the episode, noting her feelings for him, but how upset she was by his lack of emotion over his elimination.

“I know that was just — that was horrible, and for two days after, all I’ve been saying is, ‘What the f**k just happened?’ I didn’t even see that coming,” Ben continued. “And the feelings that I’ve had for you, I’ve been describing this entire time. I just didn’t know what it was, but I’m in love with you.”

“Ben,” Tayshia whispered, trying to process what she just heard.

“I have been in love with you,” he went on, admitting he was “starting to get nervous.” “I blew it by not telling you in the moment. I’ve never felt this feeling, so I was just terrified. But I am in love with you. Like, the life we could have together. The thought of that, it keeps me awake at night. And I’m not sure what to do right now, I’m not sure what I’m asking for. I don’t even know what I’m doing. I just couldn’t leave. But I just had to tell you. Like, I see a life with you.”

Tayshia then asked Ben to “hold on a second,” and buried her face in her hands. Ben asked if she was all right, and she told him he wasn’t. “No, I’m not all right,” she admitted.

“Come here. Give me your hand,” Ben said, reaching his arm out on the couch.

Tayshia held his hand, but then got up and stormed off. “I’m going to need a minute, OK?”

“What?” she asked a producer in another room. “I mean, I just want to cry. I don’t know what to do. There’s a rose ceremony. What do I do with that?!”

Fans will have to wait until Tuesday night’s episode to find out if Tayshia takes Ben back — and how her journey ends.

The season finale of The Bachelorette airs Monday and Tuesday at 8 p.m. ET/PT on ABC. ET’s Lauren Zima will be recapping everything that goes down, directly after each episode. Watch ET Live on your Roku, Apple TV or Amazon Fire TV or you can stream on Pluto TV and Samsung TV Plus.

'The Bachelorette': ET Will Be Live Blogging Night One of Tayshia Adams' Finale! 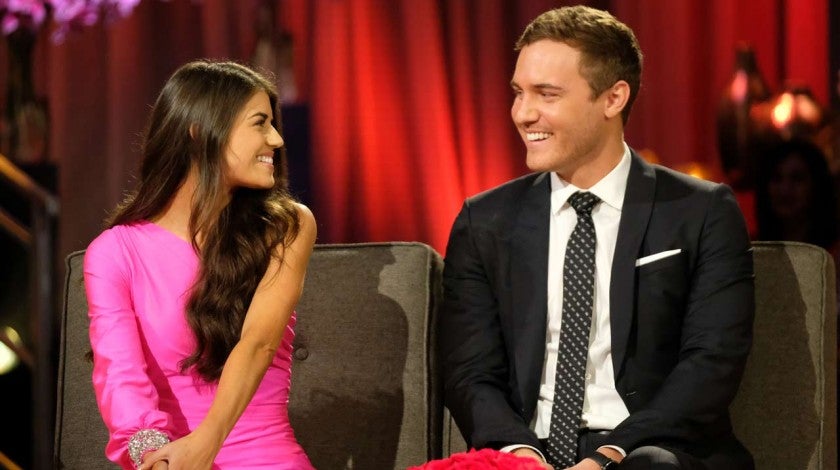