Avengers: Infinity War is based loosely on the classic Marvel comic The Infinity Gauntlet, and although it will be importing certain aspects of the cosmic epic to the big screen, the villain Thanos’s unrequited love story won’t be one of them.

Both film and comic give the big purple giant the desire to wipe out half of the population of the universe, but in the new version, it isn’t because he wants to impress the anthropomorphic personification of Death. 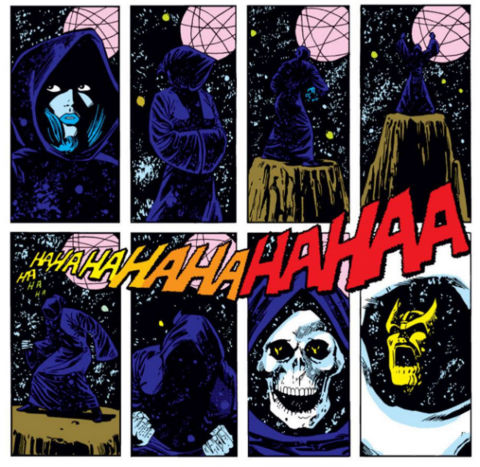 “At the very beginning, just because it’s such a focal point of the comics, we talked about it, but I think… it is not something that brings you closer to his motivation,” McFeely told ComingSoon.net.

“It’s not something where the average moviegoer says, ‘Now I can kinda empathise with him because he’s in love with Death!’ But I think we took that passion that he has… he really is in love with Death in the comics! He’s a lovelorn, kinda sad little fella.

“We wanted to maintain that level of emotion on his part, just redirected.”

In the film, Thanos attempted to avert disaster on his home, Titan, with a radical reduction of the population. When he was ignored and cataclysm struck, he decided that half the population of every inhabited planet needed to be reduced.

The full plot of the film is known to only a few – until the premiere tonight (Monday, April 23), at least.