The 51-year-old actress has been a recurring player on the BBC Radio 4 soap opera for more than 25 years as Debbie Aldridge, a character who apparently has a very, very dedicated fanbase. Maybe a little too dedicated…

Tamsin was chatting on The Graham Norton Show on Friday (April 27), when Graham asked about her most embarrassing encounter with an Archers fan. We don’t think anyone was prepared for her answer.

“I don’t know what it is, but people think they can say anything to me,” she joked. “The other day someone said, ‘You’re much better at acting than you used to be!’ and, when I was heavily pregnant I was shopping for paint. I was down on all fours looking for the colour on the bottom shelf and the only thing you could see of me was my very big pregnancy bum. 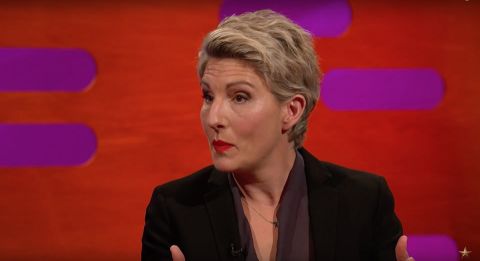 “Someone came up to me and said, ‘Well, if it isn’t Debbie Aldridge!'”

Keep in mind that Tamsin Greig is only heard on The Archers, not seen! Unfortunately for Tamsin, that wasn’t the only time she’s been accosted by an over-eagerArchers fan.

“Another person said, ‘I love you in The Archers. You pause so well.’ So, I thought, ‘You think I am at my best when you can’t see me and I am silent!”

Tamsin is currently wrapping her role as sitcom writer Beverly Lincoln in the final season of Episodes on BBC Two, alongside Matt LeBlanc and Stephen Mangan.

The Graham Norton Show airs at 10.30pm on BBC One, with the fun continuing next week as well with Stephen Mangan and music from pop sensation Jess Glynne.