The following contains spoilers from Wednesday’s episode of Survivor 43.

On Wednesday’s episode of Survivor, tensions flared between Owen and James, bringing about the season’s spiciest Tribal Council yet. Despite being the keeper of the Knowledge Is Power advantage, former Coco member James eventually lost the battle and the war after the merged tribe of 10 was split in two, and Noelle concocted a plan to use her Steal-a-Vote to eliminate him from the game. (Read a full recap here.)

But James’ close ally Karla was also in on the duplicity. So how does James feel about the move and the backstabbing, and what are his real feelings about Owen outside of the game? We asked him all of this and more in our weekly exit interview.

TVLINE | When you were voted out, you seemed to be feeling some kind of way. Tell me a bit about what was going through your head in that moment.
JAMES JONES | It’s Survivor! You’ve been wanting to play this game forever. You’re out there and you get voted off, yes, I was upset. I was mad! More people should probably be mad! Your dream goes away. I felt like I was playing a good game. If I made it past that double, I felt like I had a chance to do some damage. Also, I didn’t understand the move. If Karla’s voting against me, you have the four votes, just vote me out. Save your Steal-a-Vote. The way I was looking at the game, I didn’t think it was something that was really going to happen or made sense. I probably should’ve thought about it making sense and that’s why I’m sitting here! So you have to look at both sides. It is what it is. Now that I’m gone, the game opens up. I was targeted at every single Tribal Council after the merge.

TVLINE | Owen did vote for you once, but was there anything else we didn’t see that caused such a big divide between you two?
I feel like it first started at the Dwight vote. I communicated to Sami and Owen that we were voting Dwight out. Sami gets in on the vote, Karla’s been working with Sami, so we’re all working to make sure the vote is a little murkier. We tell Owen. Owen apparently doesn’t believe me, doesn’t want to work with me and then still tries to vote against me at that Tribal. I extend an olive branch: “I’m not targeting you and you still put a vote on me.” So you’re mad that I didn’t tell you your ally was going home? That’s Survivor. So I was trying to figure out what the added anger was for. Everyone else is lying to you. Why are you mad at me?

TVLINE | You’ve been home for a few months, you’re out of the game… any lingering beef there?
No! Owen’s a great guy, man. That’s the thing about the game. You want these disagreements! Everybody knows where everybody stands, but everyone’s afraid to say it and put their foot in the ground. But sometimes the game looks a little better when people are more forthright about where they stand in regard to their alliances and who they want to work with. Also for me, I wanted to make sure my people understood that I was publicly standing on the things I was saying to them in the bushes and on the beach while walking. I was trying to lower my threat level to the people I was working with, and not really caring about the people I wasn’t working with. I was a good person to work with if you were working with me. 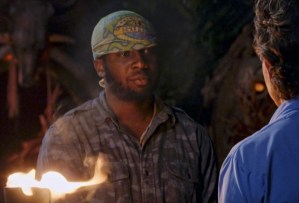 TVLINE | The Shot in the Dark hasn’t come into play much this season. Was it talked about out there?
I think mathematically, you should consider playing it. But because you know about the Shot in the Dark, people are playing the game with it in mind. People are playing the game with immunity in mind. So no one’s trying to let anybody know who’s going home. Even for the Jeanine vote, I’m not going to tell you it’s Jeanine, because what if she plays her Shot in the Dark? What if there’s a random idol out there because Jeanine… her idol allegedly went out of the game. When an idol goes out of the game, what happens? An idol comes back in. The best time to influence the vote is when it’s a unanimous vote. You throw an idol out there and whoever you want goes home. So we, as a group, wanted votes on Ryan and it just got put on me that I wanted votes on Ryan, when it was a whole group effort.

TVLINE | Were you surprised that Karla, in particular voted for you?
At the end of the day, I had a lot of relationships out on the island. Cass was my No. 1 person next to Karla since Coco. So I feel like me and Cass were closer than Karla and Cass. I was close with Ryan, Cody, Gabler… we all had different relationships. It was a good time to strike if you were going to strike. If your plan wasn’t to go to the end with me and you wanted to get rid of me, this was a good time to do so. If your plan was to go to the end with me, this was a good time to keep me. Sometimes the cards you’re dealt are the hand you have to take. Who says I get to eight and you get me out? Maybe you can’t get me out after that.

TVLINE | How much did the splitting of the tribe worry you out there?
I was worried about the split 10 all the way back in pre-merge. I tried to chill going into the merge, but then I became a target, so you have to activate and build more relationships. You have to reach across the aisle. Me being a target at the first three votes, I had to build people and work with people. I had to work a little harder to navigate those votes because I was a social threat as they said. I was pretty solid in most of the challenges, and thanks to Survivor, I was getting in shape on the show. You can see me actually shrinking in shape as the show was going on. I went from round to kind of fit, which typically isn’t the best Survivor journey. [Laughs] It was a good time. I had a blast.

TVLINE | Did you have a particular Final 3 in mind?
My first loyalty would’ve been to Karla and Cass. After that, me and Cody were really good. We were playing the game the same way. Karla and Jesse became really tight. Me and Cody became really tight. And we all saw the game the same way, so it made it very easy at the merge for us to all connect. 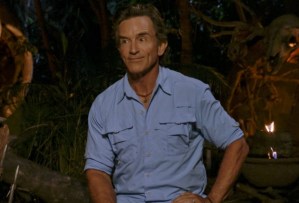 TVLINE | What’s something juicy from your time out on the island that wasn’t shown on TV?
One of the things they didn’t show, before the Dwight vote-out, I gave Sami my Knowledge Is Power before Tribal. That may have been good gameplay or bad gameplay, but that was me demonstrating trust with Sami and hoping it would give us more numbers moving forward.

Me and Cody had some good moments out there. When the choose-your-person challenge happened, me and Cody looked at each other and high-fived and said, “Yes, let’s go do it!” [Laughs] And then we were like, “OK, we’ll pick rocks…” It was little moments like that they didn’t show.

TVLINE | Do you have any regrets from your time out there?
I have no regrets. I operated with the information I had. I feel like people saw I was playing hard. I was the target three straight times. I don’t know how many people have done that. Typically it shifts at some point, but for some reason, they wanted me out. I couldn’t do anything about that. I’m here, but hopefully I get another chance! The fans are great and I’m just excited to talk to everybody and keep it moving.