Mo Gilligan and AJ Odudu were back on Saturday to present the latest instalment of The Big Breakfast. Joining the pair on the Channel 4 show were guests Richard Blackwood, Chunkz, Tyga, Big Zuu, Oti Mabuse, AJ Tracey, Joe Lycett, Emma Willis, Kadeena Cox, and Tom Grennan. However, the show took an unexpected turn when Oti revealed the bizarre way she eats an orange.

“I have a thing with oranges where it’s so ghetto,” the dancer admitted. “But it’s how I grew up eating oranges.

“Are you going to make me do it?” she asked as Mo threw an orange her way.

“What do you do with the orange?” the host asked as Oti replied: “It’s really weird.”

Much to the host’s horror, Oti placed the orange on the floor and she began rolling it along with her shoe. 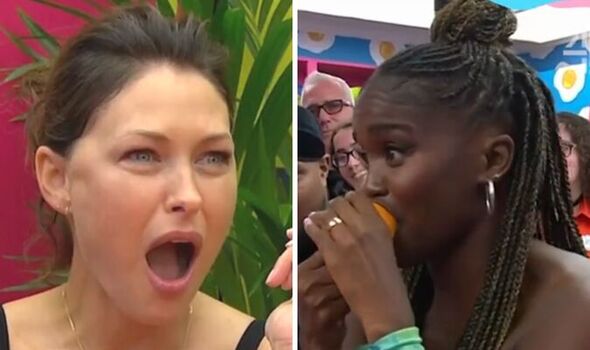 “So, I do that,” Oti explained as shouts could be heard from the studio.

“I know,” she shouted as Emma asked: “Under your shoe?”

“Yes,” Oti replied. “Because then it gets really soft.

“I can’t believe I told you guys this, why did I do this?”

“Oh my, God,” someone in the audience shouted as Oti bit into one end of the orange.

“Then you suck all of the juice out,” the Strictly star continued.

“Then I get the juice, look at that, and then I split it up.”

Some viewers were left disgusted by the segment, and many took to social media to share their thoughts.

V tweeted: “Ermm roll an orange with your shoe on the ground where you have been walking on rats p**s amongst other stuff and then bite it to eat it?

DJ replied: “The troubling thing was that she seemed to think that was the only to end up with just the orange peel.”

While Michelle added with a vomit emoji: “Rub the orange with her shoe that’s been all over the floor then bit into it.”

Defending the professional dancer, James Allison said: “At least Oti didn’t bite the bit she rolled on the floor #TheBigBreakfast.”

While AJ said: “Oti rolling an orange under her feet and gnawing it like an apple is peak Saturday morning TV #TheBigBreakfast.” (sic)

The Big Breakfast returns on Saturday at 10am on Channel 4.