Stormy Daniels has made a surprise appearance on Saturday Night Live to deliver a message to US President Donald Trump: "A storm's a coming, baby."

When the fake Trump asks Daniels what she would need to "for this all go away," she replies: "A resignation." 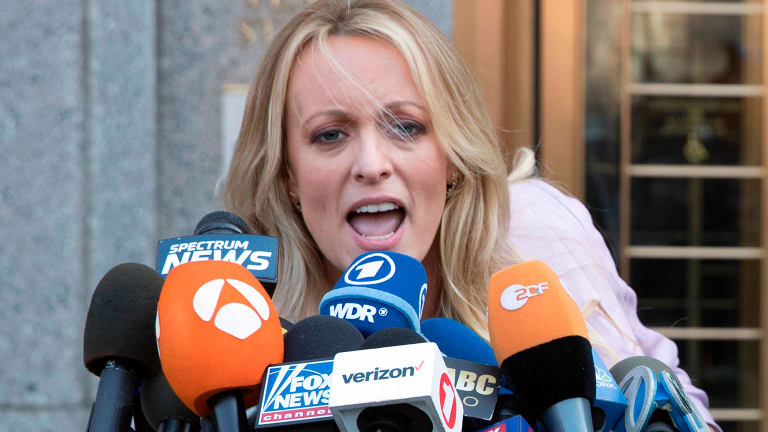 Speaking out: Stormy Daniels is making waves despite a gag order preventing her from speaking about her alleged affair with Donald Trump.

The episode's sketch started with Alec Baldwin's Trump on the phone with Cohen, and also featured Bornstein and Kate McKinnon's brutal take on Rudy Giuliani, with two FBI agents listening in and spoofing the recent news that Cohen's calls may have been logged by the feds.

Daniels, whose real name is Stephanie Clifford, is seeking to be released from a non-disclosure agreement preventing her from lifting the lid on her alleged affair with Trump . She has also filed defamation suits against Trump and his personal lawyer, Michael Cohen, who paid her the money.

Trump denies he and Daniels had an affair, and has sent mixed messages about his knowledge of the settlement.

Then, following the parade of other guest performers, the real Stormy Daniels appeared, warning the phone call's participants, "I know you don't believe in climate change, Donald, but a storm is coming." —