Every new beginning must come to an end. Last night, we bid farewell to the first season of The Hills reboot with a two-hour finale that had cast members dressed in white—and seeing red—at Spencer and Heidi’s vow renewal.

A quick recap of what happened: Heidi and Spencer recommitted to their marriage, Brody and Kaitlynn pretended everything was fine in theirs, and Ashley and Kaitlynn finally spoke to each other about all those rumors.

At the same time, Justin Bobby made things official with Lindsey, Brandon broke up with his girlfriend, and Audrina and Stephanie had to deal with the fact that their relationship fantasies would never come true—at least on this season. Oh, and Mischa Barton came to the vow renewal, too, although it’s anyone’s guess as to whether she’ll be back for season two.

We needed to get the inside dirt on what really happened during the finale, so we talked to Spencer and Heidi about what the weekend was like. They had…thoughts.

I’ve gotten a couple of tweets that really affected me, and someone said, “Brody’s right, you’re a little too concerned about his relationship.” You know what? That person’s 100 percent correct. If there weren’t three freaking cameras and people getting paid to hold them up around me, I probably wouldn’t care so much. I probably would not ask 41 questions. I would just sit there and enjoy my fourth espresso of the day. But I also wouldn’t be making this thing called a television show. And if we’re saying this show is about our lives, then I want to hear about Brody’s real life and his fake marriage. Brody signed up for this. He cashed the check just like I did.

Heidi and Spencer’s vow renewal ends with an epic performance and Brody reflects on his relationship with his now ex-wife Kaitlyn. #TheHills pic.twitter.com/fN5KTzVFIg

I’m not a bully. I’m not forcing him to lie. MTV’s not forcing him. If you’re going to be on a reality TV show, either be honest or don’t be on the show. Lies are going to catch up to you. Literally, every person who lives on this planet and has the internet knows that what Brody was saying to me was untrue. He didn’t want to be in his relationship, Kaitlynn didn’t want to be in the relationship. He was just playing pretend straight to my face.

The Brody Jenner that’s dating Josie Canseco, though? That guy’s going to be a dang star.

On Audrina saying she’d only stay for part of the vow renewal trip because she was afraid of Stephanie.

I was so disappointed that Audrina used Stephanie as an excuse. That wasn’t honest. She could have avoided her. Did you watch the show? We were in a dang mansion!

If Audrina could deal with all of the court shit she’s had to go through, she could deal with one night of Stephanie on her best behavior. She’s tough. And that means she should have shown up and done her job — which was to be on this show.

That little cameo she made? That wasn’t good enough. She should have been at the wine-tasting. She should have been at dinner. She should have sat there and gotten to know Lindsey and worked through her emotions. When I got the call she wasn’t coming, we were already at the villa, and it really put a damper on my day. Saying she was scared of Stephanie was a cop-out. Audrina’s a swim-wear entrepreneur. She’s dealt with lots worse, I promise you.

On Brandon and Ashley breaking up:

The line of the season is when Ashley said, “you deserve a Grammy,” because it raised so many questions. Did she mean an Emmy? Maybe she was too emotional and got her awards shows messed up. Or maybe she’s just listened to his SoundCloud.

Let’s be honest: None of the stuff he was saying about his dad was relevant. He just got in too fast, too deep, and didn’t know how to get out. I mean, I definitely heard him talking about engagement rings. I was like, “whoa, whoa, dial it down.”

…so who’s going to tell her? #TheHills pic.twitter.com/jK7Z5xjHoi

I think Ashley knew that it was BS. I wish she’d articulated what I saw on her face, which was, just cut the crap and say you want to break up with me so you can hook up with other girls, one of whom is Brody’s ex-girlfriend.

On Kaitlynn being angry she was invited to the vow renewal at the last minute.

The only reason you were invited at the last minute is that your alleged fake husband threatened to kill my sister the week prior and I was waiting for him to text her an apology. Then, I could text him and say, “Hey, Brody, would love to have you there! Hope you and Stephanie don’t end up in jail or dead together.” That’s not on me, lunatic.

The reason Kaitlynn hates me is that the only things I know about their relationship come from Brody face-timing me when they were screaming at each other to say, “Pratt, this is what I have to deal with.” I would say, “No you don’t. It’s called a break-up because you two aren’t even legally a couple.” 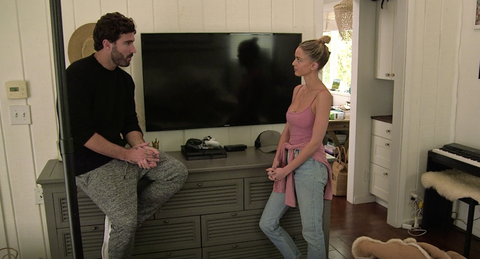 The only reason we’re not hearing about this right now is because these two have declared a little peace treaty. Before that, things got so bad that Kaitlynn and Brody’s mom were going at it on Instagram.

On Justin being in a relationship with Lindsey after only a few dates.

That was Stephanie and Audrina’s biggest mistake. They didn’t claim him. You just have to say, “he’s my boyfriend,” and he’ll go along with it.

That’s what Kaitlynn did to Brody. But I guess it’s risky if you follow that relationship’s trajectory. Either Lindsey and Justin will still be going strong on season two, or she’ll be dating Miley Cyrus.

I feel bad for Stephanie. She choked so hard when Lindsey called Justin her boyfriend that she couldn’t talk for a few minutes.

On Kaitlynn being angry at the other women for talking about her relationship.

Kaitlynn finds out everyone’s still gossiping about her and Brody’s relationship and she’s had enough of the rumors!

Kaitlynn’s testimonials were filmed, in my opinion, while she was in a relationship with Miley. She has that new confidence of, “I’m a celebrity. Who are these peasants to talk about me? I don’t have time for this. I’m making out with the woman who brought the world ‘Party in the U.S.A.’” Heidi says she’s always had that attitude, but I feel like the testimonials went to a whole new level once she started spending time on Hannah Montana’s yacht.

On Ashley Wahler’s assertion that Brody and Kaitlynn weren’t ready to be parents because of their open relationship.

Heidi: Ashley’s completely right. It is not a good decision to bring children into a situation that is emotionally unstable. That’s what I think she was trying to get at. I don’t think she was trying to be malicious or say anything bad about open relationships. For me, she was saying that if their relationship’s rocky—if Kaitlynn’s not happy in it—there’s no reason to bring kids into it. Having a kid is not a bandaid. Kids don’t make difficult relationships better, they make them worse because it’s already very challenging to be a wife. And it’s even more challenging to be a mom.

Having a baby takes your relationship to a whole other level. If you’re not in a good place, the worst thing you could do is have a child. Not only will it bring chaos to your relationship, it is going to be horrible for that child. Ashley was trying to help. She was just being honest. 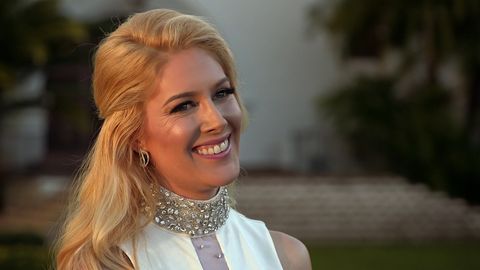 On the confrontation between Ashley and Kaitlynn.

Spencer: I think Ashley was up against a pathological liar that would’ve just kept going around in circles, and I think Ashley handled that great. You know what the extra beef was that didn’t make the cut? Kaitlynn said she didn’t want to do The Hills because she thought Jason and Ashley were trashy. She said that to me when we were getting ready to start filming. 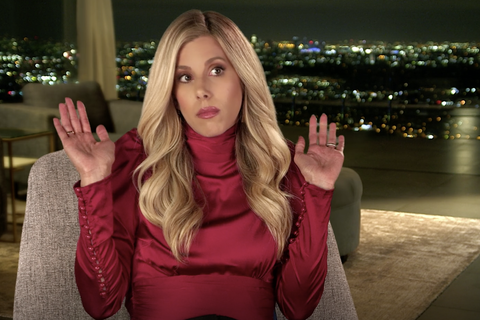 I informed Ashley that Kaitlynn thought she was trashy because that’s what I do when people are talking shit. I think that’s another reason she didn’t want to talk to Ashley—because they would have had to discuss that little piece of information.

On why Kaitlynn is such an outsider.

Heidi: I think the way people are being towards Kaitlynn is the way that Kaitlynn has been towards everyone. She didn’t want to try to be a part of the friend group. She didn’t want to get to know anybody. She wanted it to be her and Brody, have their own show, and not be part of The Hills cast.

WHAT. A. CONCEPT. 👏 #TheHills pic.twitter.com/J3R5aLPztR

I think that’s why everyone is so turned off by her energy. It’s not that anyone even had a problem with Kaitlynn. Everyone was very open to Kaitlynn, but she was being completely dismissive and rude towards everybody. I think Kaitlynn isolated herself from the group because she didn’t want to be a part of it. No one felt like they could talk to Kaitlynn.

On Stephanie telling Spencer she loves him:

I’ll smile to anything positive Stephanie says, but I had a crystal ball telling me that in one week she was going to snap and go full rant mode on a podcast…and guess what happened? It’s the same broken record: “Oh my God, you’re my best friend,” one week, and then, “I hate him and he’s horrible,” the next. It’s just a never-ending cycle.

I’m glad that day she was in an “I like Spencer” mood that day. It was heart-warming. I’m still warm from it.

On Audrina and Justin reconciling.

That conversation would have ended very differently if Lindsey wasn’t standing right there. I think Justin and Audrina just have this connection. That’s why Audrina was so emotional. I think she really thought they were meant to be together and could make it through anything.

On whether he wishes everyone could find love like he and Heidi have:

I wish everyone could find love like we have now, but what we had to deal with to get here, I wouldn’t wish upon anyone. We’ve had more people trying to sabotage and destroy our love story than I’ve seen in a lot of movies.

I hope everyone finds the love that we have but don’t have to go down the same road. It’s been a straight-up war. I don’t know how many people would make it to where we have. 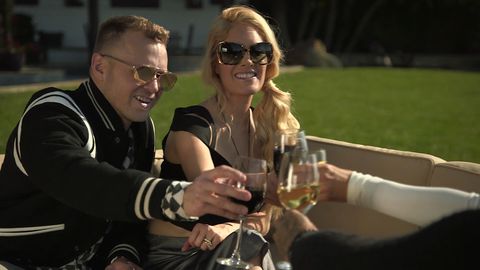