The soundtrack to one of comedy’s classic shows is out Friday. Not that there’s anything wrong with that, yadda, yadda, yadda. 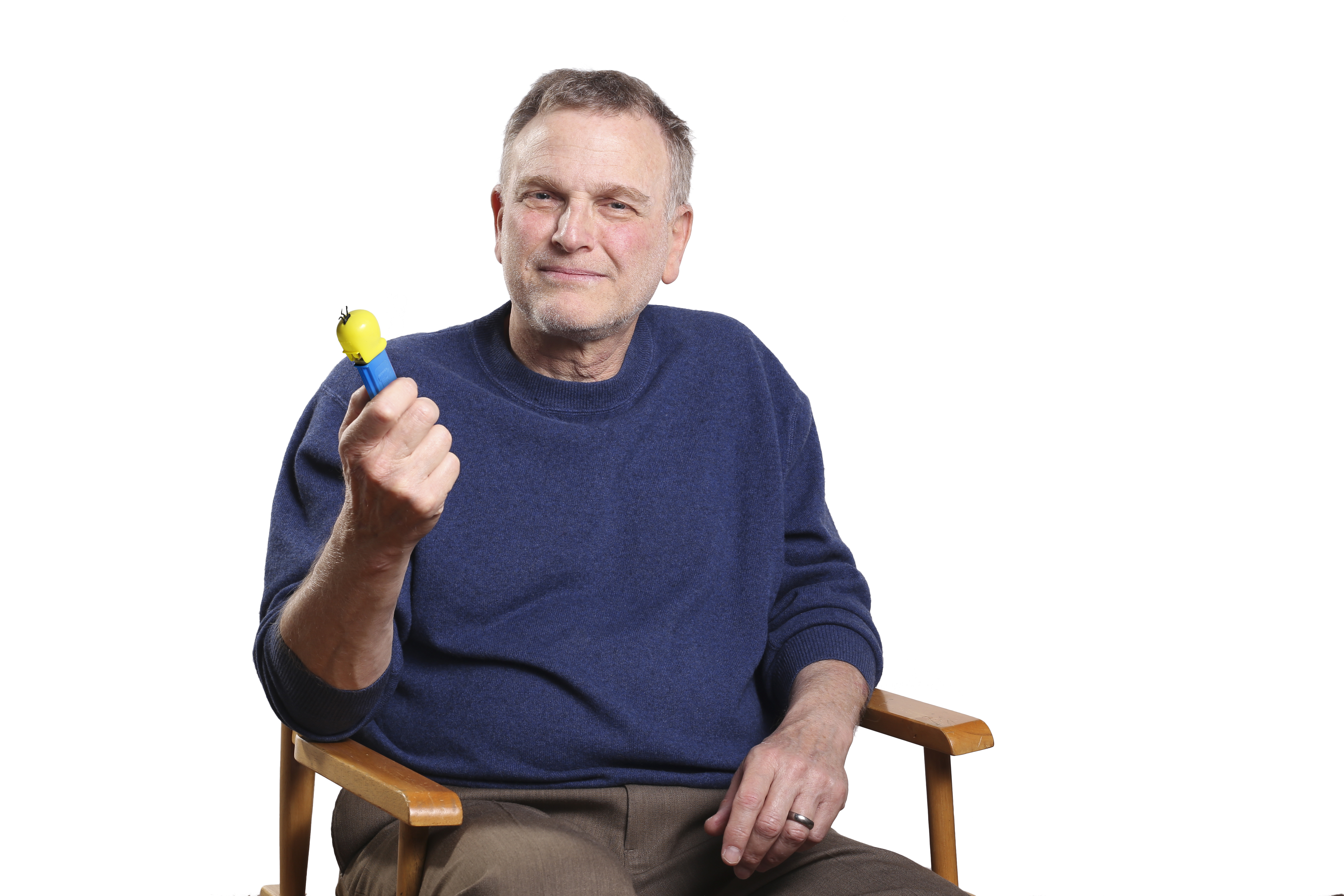 The Seinfeld Soundtrack (released on the WaterTower label starting tomorrow, July 2) spotlights music from the show’s nine seasons and 180 episodes. The score was carefully curated by the show’s composer, Jonathan Wolff, who selected songs specifically with fans in mind. Wolff’s resume includes composing music for Will & Grace, Married with Children, Reba, Who’s the Boss, and Saved by the Bell: The College Years.

For the Seinfeld collection, such popular scenes as “Cable Guy vs. Kramer,” “Jerry Vs. Newman Chase” and “Rochelle, Rochelle the Musical” are revived, as are three different versions of the show’s theme song.

Wolff answered a few Deadline questions about the music and how it played into the making of the hit comedy.

DEADLINE:  What instrument was the classic five-note interstitial that sounds like a Rickenbacker bass line? When did it become the standard transition on the show?

JONATHAN WOLFF: Well, first of all, thanks for noticing that signature bass line that I used for a lot of the scene transitions. The five note phrases that you mention were most likely elements from the actual theme bass line. But since the transition pieces were often different lengths and different tempos, they were usually not the same five notes.

The Rickenbacker bass sound (as you called it) – Full disclosure. Yeah, back in the day, I owned a Ricky bass, and it was a beast. But the answer to your question is a bit more complicated. The Seinfeld bass sound was Frankenstein-engineered from multiple sampled bass guitars. There may have been a Ricky in there, I don’t remember. I used sample editing, compression, EQ, phase manipulation, gain staging, and anything else I could do to make that bass sound more unique. And then I triggered the notes using a keyboard controller. Which, to nice folks viewing interview videos of me working, is sometimes confused with the actual sound source. No synth for you! In fact, there were multiple Seinfeld bass hybrids throughout the show. It became a thing around my office for my staff to leave me gift bass samples to weave into Seinfeld cues. That’s how the Seinfeld sound evolved over time.

DEADLINE: Would the show have been as funny without music?

WOLFF: Seinfeld was like a Camelot era of TV production, for all of us who worked on it. Every department was packed with SEAL team, Delta Force highly trained professionals who each did their jobs well. And as a production team together, we all contributed to the “funny.” It starts with the writers, of course. Would the show have been as funny with different music? I don’t know. I would like to think not. My goal was to create a sonic brand that, when someone hears it, even from another room with their head in a refrigerator, a Pavlovian response occurs. “Ooh, that’s Seinfeld. Let’s watch that show.” Part of my job on Seinfeld was to create music that helps make people ready to laugh.

DEADLINE: Are there any moments that you wish you could go back and change, cue-wise?

WOLFF: No, I’m happy with my choices. I did 75 series. You don’t get to that number by doing them one at a time. So, while working on Seinfeld, I was usually also composing for nine or 10 other shows. There was not time for me to second guess my instincts when creating all this music. My job description was simple: Assist and elevate the comedy. So no, I don’t think I’d go back and change anything. But thanks for asking.

DEADLINE: How involved were Jerry and Larry David on the music side?

WOLFF: I got this phone call from Jerry Seinfeld. I knew he was going to call because my good buddy George Wallace had told me. Turns out, in real life, Jerry Seinfeld has a best friend named George. George Wallace. In that first phone call, Jerry described to me the opening credits. Jerry would be doing stand up material in front of an audience. And he wanted the music to go with it. I told Jerry, “That sounds like an a recipe for an audio conflict.” Because remember, in the late ’80s, early ’90s, theme music was melodic.

A lot of it was dopey, with silly lyrics and sassy saxophones. But music like that was not going to work with those monologs. So I pitched to Jerry, “What if we use your human voice [telling jokes] as the melody for the Seinfeld theme? Each different monologue will be a variation on the theme. My job, Jerry, will be to accompany you in a way that’s musical and funny, quirky and unique, but does not interfere with the audio of your human voice telling jokes.” I suggested that the organic nature of my finger snaps, lip pops, and tongue noises might blend well with the organic nature of his human voice telling jokes.

It was a Saturday. I was working alone at my office, so I invited him to come over. Jerry came and observed as I created the music elements. Using existing video of Jerry’s stand up, I created a model of how the music would function. And the bass? At that time, slap bass had not yet enjoyed celebrity status as a solo instrument. It was an element in funk music. I brought it forward, illuminated it, and made it sound weird and nasal. In a general way, the audio frequencies of the bass do not interfere with the audio frequencies of Jerry’s voice. And the bass line is so simple that it does not require meter. It was designed to be modularly manipulatable. Like lego music. The bass can start and stop to allow for Jerry’s jokes.

For every monologue, I’d create a new recording of the Seinfeld theme to match the timings and length of that monologue. So Jerry’s involvement that day was watching me work. His girlfriend brought us over burritos. Writer/comedian Pat Hazel also stopped by to watch. They let me do my thing. When I was done, Jerry held up the phone to the speakers in my studio. Larry David listened and approved it over the phone. And that is how that Seinfeld theme was born.

After Season 7, Larry took a break from Seinfeld. But until then, Larry and Jerry each attended every mix of the show. At the mix, my music editor would sometimes offer them music choices that I had prepared for their approval.

DEADLINE: What was the one scene whose music still give you chills?

WOLFF: Again, it was the good work all of the departments combined that made scenes really work. Himalayan Walking Shoes from the episode The Hot Tub is a good example. Greg and Andy wrote this really unusual, surreal scene where Elaine is upset. She’s anxious. She’s nervous because she has writer’s block. She is unable to write the story (for the J Peterman catalog) of these Himalayan walking shoes. As she walks along the strange, cold, dark street, her voice-over narrates all these negative, scary feelings until she realizes that her words are, in fact, the perfect story for Himalayan walking shoes.

She has broken through her writer’s block. It was beautifully written, acted, and shot. Everybody (art department, director, wardrobe, camera crew, lighting team) each did their jobs so well that, when it was my turn to throw in, I just connected the dots and added cinematic dramatic underscore for Julia’s voiceover that followed her emotional stages. So that’s one example of a scene where I’m really happy with how the music (along with all the other departments) worked especially well in a Seinfeld scene.

DEADLINE: What was different about the music in Seinfeld from the other shows you’ve done?

WOLFF: The Seinfeld soundtrack album has a wide range of styles and types of music. As the show progressed, the characters’ comedy grew wider and sometimes they’d swing completely unhinged. And that gave me opportunities to create unusual music. For the album, I chose the most memorable of these scenes. Those include John Jermaine jazz, Kramer’s boombox photoshoot music, Kramer’s Big Daddy pimp walk, loud dixieland, and a bunch of others. My music assignments on Seinfeld were eclectic. With every page of a new Seinfeld script, I’d never know what assignment was going to come my way. And that is what separated Seinfeld from a lot of the other (we’ll say more generic) series that I worked on.

DEADLINE: If Seinfeld came back on the air (I know, never), but if it did, how would the music evolve, or would you feel obligated to follow the patterns laid out from the earlier series?

WOLFF: By 2005, my wife and I had way too many kids. And, although I was still a very busy composer, my family needed me more than Hollywood needed more of my music. So I retired and we moved to Kentucky. It was like a Hollywood witness protection relocation program. I became a full-time stay-at-home dad/PTA room parent/sports coach volunteer/field trip chaperone. For many years, I had a nice long, turn at bat, and hit the ball hard over and over. My turn ended in 2005. It’s somebody else’s turn now. So, if Seinfeld ever came back, I would not be the composer for it. There are excellent people who were on my staff whom I would recommend for the job. And my guess is that they would put their own spin on it.

DEADLINE: People who listen to Dark Side of the Moon have rituals before listening, and many other albums evoke similar patterns. How do you want people to listen to this collection?

WOLFF: Favorite question, Deadline. Often, soundtrack albums include brilliant masterpieces of musical artistry, or compelling, momentous film score suites that require critical listening. Not this one, Sacamano. Seinfeld fans should have fun with this album.