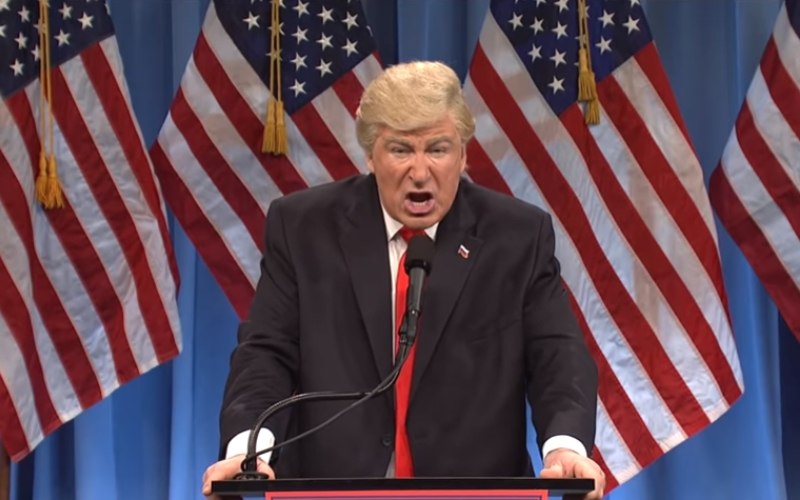 Saturday Night Live is intimidating for most performers. It probably doesn’t help that there is a long list of celebrities who have been banned from the show. One actor who has been invited back to host and appear on the show throughout the years is Alec Baldwin. He’s done it so many times it might be hard to keep track, but the number has set a record. This is how many times Alec Baldwin has hosted Saturday Night Live.

Even before Alec Baldwin started using his Donald Trump impression on the show, he has been a favorite for hosting the show. Now he holds the record for hosting the show the most by hosting 17 times, but he has obviously guest starred even more than that.

According to NBC News, he first hosted Saturday Night Live back on April 21, 1990, to promote The Hunt for Red October. He returned enough times to enter the small five-timers club of celebrities who can say they hosted the show at least five times. Then he beat Steve Martin’s record who hosted the show 15 times since 1976.

He has since written about some of his most memorable moments being on the show. In his memoir, he wrote about meeting Whitney Houston the second time he hosted. “After her dress rehearsal, I was introduced to her backstage. ‘You truly are the most talented singer out there today,’ I said, a bit star-struck,” he wrote, “She paused and said, ‘I know, baby,’ then walked on.”

He also acknowledged that he got to work with many casts throughout the years so who stood out to him? “But none was funnier than [Phil] Hartman,” Baldwin wrote “who was perhaps the only person to crack me up during the live show. Phil could channel any kind of character, from smart to dumb to truly insane. He was a wonderful actor. When I heard about his death, in 1998, I was stunned and sickened.”

He won an Emmy for supporting on the show

Alec Baldwin was recently recognized for his work playing Donald Trump on the show. He won an Emmy for Outstanding Supporting Actor in a Comedy Series in 2017. He was also nominated the following year for the same role.

When accepting the award he gave a message to Donald Trump himself. “I suppose I should say, ‘At long last, Mr. President, here is your Emmy,” he joked. He also mentioned that his wife doesn’t exactly find his Trump costume sexy. “All you men out there, you put that orange wig on, and it’s birth control, trust me,” he said.

Although his impression has been awarded and became popular, Baldwin claims he’s not exactly enjoying it. “Every time I do it now, it’s like agony,” he told The Hollywood Reporter. “Agony. I can’t. If things don’t go in the right direction for the midterms. … I could go out on the street, stand on any corner and tap 10 people on the shoulder. And all 10 of them, in all likelihood, would be more qualified — ethically, morally, intellectually and spiritually — than Trump.”

There doesn’t look like there are any signs of his impression stopping. He just might break his own record again.