Sandra Bullock plays an ex-con who was incarcerated for a ‘heinous’ crime in this first look at her new Netflix movie, ‘The Unforgivable’.

Sandra Bullock, 57, looks effortlessly beautiful in this first look at her new Netflix movie, The Unforgivable. In the photo that was released to promote the drama-thriller on Sept. 21, the actress can be seen wearing a yellow and white button-down shirt while staring into a prison mirror without an ounce of makeup on her face. Her cheek appears bruised, and her lip looks slightly cut as she stares at her own reflection. 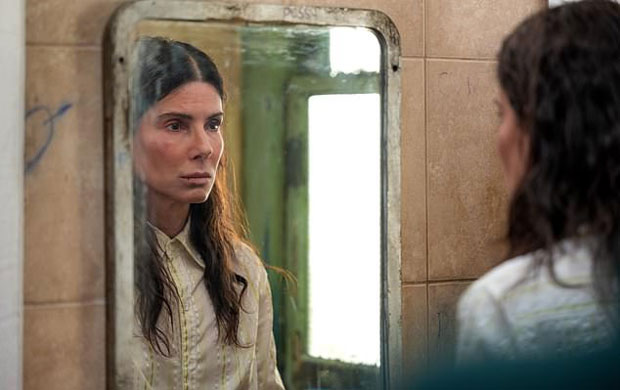 In the movie, Sandra plays Ruth Slater, a woman who just gets out of prison after serving a 20-year sentence. “My character is someone who has been incarcerated for 20 years for a pretty heinous crime [and] gets out,” Sandra told Entertainment Weekly. “There are several people whose lives she affected by this crime she committed, and there’s a lot of hatred and anger and bitterness and sorrow associated with her release. She wants to find this one person, the only family she had when she went in, and you keep asking yourself, ‘Why can’t you let it go? This family member was traumatized by your actions — let it go! Stop harming these people all over again.’”

“Finding out the background to the story of why she did what she did is sort of the whodunnit of this,” Sandra, who’s also one of the producers of the film, said of the project.. “It’s a murder mystery within a very complex character drama.”

The movie also stars Jon Bernthal, Vincent D’Onofrio, Viola Davis, Richard Thomas, Linda Emond, Aisling Franciosi, Rob Morgan, Emma Nelson, Will Pullen, and Thomas Guiry. The Unforgivable, which is based on a three-part British miniseries, will be released in select theaters on Nov. 24. It’ll also be available on Netflix on Dec. 10.