Robert Durst has said he regrets doing HBO’s The Jinx.

The real estate mogul was arrested in 2015 after appearing in the true crime documentary, and is currently awaiting trial for the murder of Susan Berman.

During a pre-trial hearing this week, the Los Angeles Times reported that prosecutors played a jail house recording of Durst making a phone call, in which he said he regretted taking part in the series, which ultimately led to his arrest. 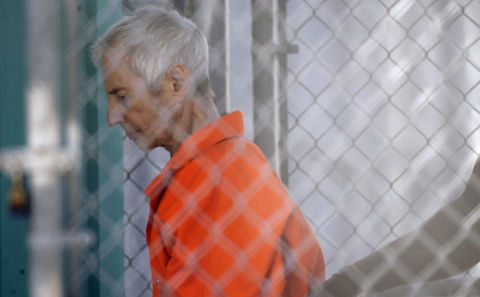 In the recording obtained by prosecutors, Durst is reported to have told a friend that he became concerned while watching the fifth episode of The Jinx.

The penultimate episode saw producers hand Durst a letter he sent to Susan Berman that had similar handwriting to an anonymous letter sent to police at the time of her death, as well as the same incorrect spelling of ‘Beverley Hills’.

“If I can find somebody who’s got something I wrote back then, or even somebody who can say, ‘Yeah, yeah, Bob used to write to me. He wrote me a couple of letters. He never misspelled Beverly,’ that would be very helpful, I think,” Durst can be heard saying in the recording.

The Jinx: The Life and Deaths of Robert Durst was a six-part documentary series that focused on Durst, who at that time was a person of interest in a string of seemingly unsolved crimes.

During the show, Durst was asked about the disappearance of his wife Kathleen in 1982 and also the murders of his friend Susan Berman – whose body was found on Christmas Eve in 2000 – and Morris Black.

While Durst was acquitted of murdering Black, prosecutors in his trial for the murder of Susan Berman contend she was killed to prevent her from revealing incriminating information about Durst’s involvement in the disappearance of his wife Kathleen in 1982, which remains unsolved.

In the show itself, Durst is thought to have made what appeared to be a confession to all three murders in the series finale, while on a live mic in the bathroom.

A psychopathic sexual predator who repeatedly violated a woman while on parole for a previous rape has been jailed for 15 years. The Crown argued…