Alexander, 49, was joined as always by his Pointless co-host Richard Osman, 48, with the pair welcoming three returning couples and one new duo to the BBC quiz show, hoping to get their hands on the jackpot prize.

Usually, Alexander introduces the episode’s contestants before welcoming his co-host, with him and Richard having a brief chat before the presenter reveals the jackpot the players would be battling for.

If the prize fund is of substantial value, it means the contestants from the previous edition of the show would’ve failed to get their hands on the money and Alexander would reveal this after explaining what jackpot the contestants would be playing for.

However, as he got caught up in his conversation with Richard about the new couple joining the three remaining pairs, Alexander revealed the fate of the previous jackpot hopefuls, ahead of the schedule.

Speaking to Alexander and mother and son duo, Tom and Pat, who were replacing the last couple who had completed their time on the show, Richard said: “They were very nice but also very, very smart, so you’ve got a lot to live up to.

“That’s the hole you’re filing in today’s show. They were very clever, weren’t they?” Richard remarked, before explaining the previous pair, Joe and Iraj, made it to the final round last time.

The host continued: “They did a jackpot round on George Washington. That’s how clever they were. American States and all sorts of things.”

However, it was at this point Alexander prematurely revealed the previous couple’s fate, telling Richard and today’s contestants the pair didn’t win.

Realising the blunder his co-host had made, Richard jumped in to tell Alexander: “Sh, jeopardy,” with the presenter stumbling on his words as he realised he got ahead of himself.

“Oh, no, sorry,” Alexander stated, before trying to rectify his mistake by joking he was reacting to how the pair did in the previous rounds. 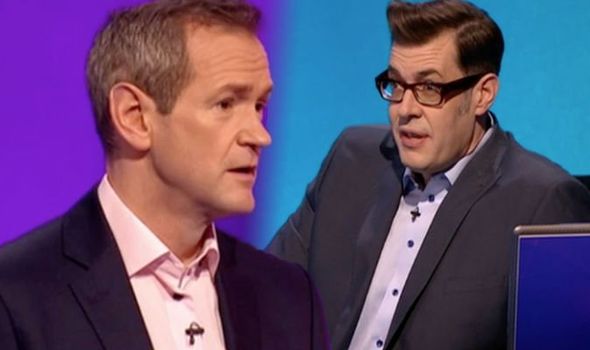 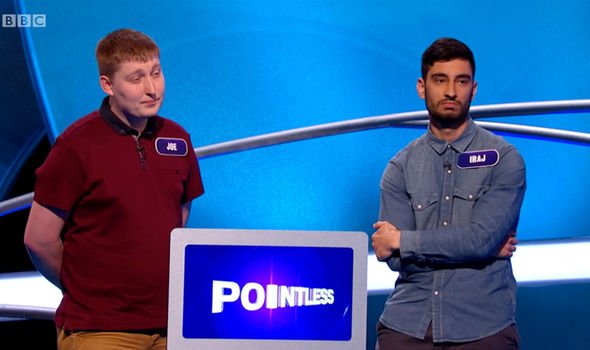 As Richard joined in with the joke, Alexander then returned to the script which had scheduled in the host revealing Joe and Iraj’s fate.

“Previously on Pointless, Joe and Iraj didn’t win the jackpot last time, so we’re adding another £1,000 to it, so today’s jackpot starts off at £3,000,” Alexander explained.

After the minor disruption to proceedings, Alexander and Richard continued with the rest of the show, which saw duo Wendy and Derek making it to the jackpot round and winning the prize fund.

However, Wendy and Derek’s fellow competitors Eamonn and Serena were called out by Richard following their introduction to the show.

Alexander begins the show by asking the contestants to reveal their names, with Eamonn seemingly over-excited about where he and Serena were from, putting emphasis on their home city of Birmingham. 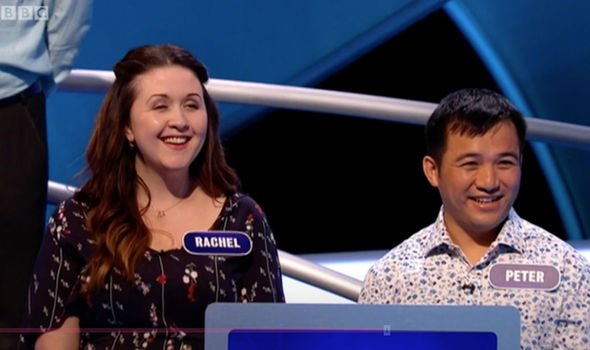 Richard remarked: “Don’t think we didn’t spot Peter trying to get a round of applause for Birmingham there.

The presenter then turned to the audience and told them: “A couple of you almost fell for it as well,” to which Alexander added: “It’s so easy to do, clearly.

“You just have to have that inflection. I hate to say this, it doesn’t even matter where you’re from, you still get it,” Alexander continued, referring to the applause a player would receive if they said the name of their home town with emphasis.

During a celebrity special of Pointless at the weekend, Richard jokingly explained the other rule the BBC show had adopted by not letting contestants say the word ‘Chase’ as it referred to their rival afternoon quiz show, The Chase.

Pointless airs weekdays at 5.15pm on BBC One.