The former MP, who was previously part of the Home Office in the 1990s as minister of state for prisons, appeared on the show to discuss Amber Rudd’s resignation and the crisis surrounding the Windrush generation. But she was criticised for bringing the separate topic of illegal immigration into the conversation.

“We don’t practice much detention, we don’t have national identity cards, they’re very difficult to track and I’ll tell you the real problem with targets, the big one that I always point out, which is that if you set a target then what you do is encourage officials to go after the easy, the soft cases because then you can pile up the statistics while the people that come in off the backs of lorries, claim asylum and then promptly disappear. They’re the ones that get away with it.” 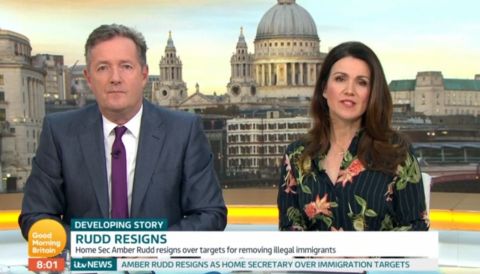 Writer Trevor Phillips, who’s a former chair of the Equality and Human Rights Commission, was also debating the issue in the ITV studio. He could then be seen shaking his head as he listened to Ann.

“It’s very disappointing to hear an independent, former member of Parliament peddling the Home Office line – these people are not immigrants, illegal or otherwise, they are Brits,” Phillips said.

“The only reason we are tying these two things together, let me be frank here, is because they are brown. These are British people who are victims of a monstrous injustice. They have nothing to do with illegal immigration!”

Piers Morgan then sided with Trevor and scorned Ann for the facial expressions she was pulling as he spoke. 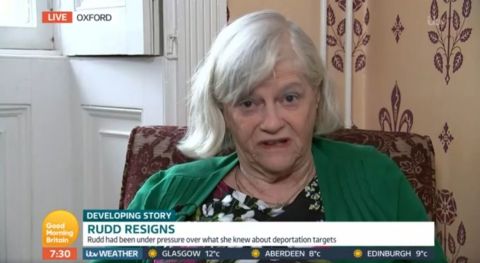 “You’re rolling your eyes but Trevor Phillips is right,” the presenter told the Celebrity Big Brother star. “These people were never immigrants, they are British citizens.”

Ann was then visibly furious with Piers and shouted back: “You are wrong! I said very clearly just now that we have to give them justice. I was agreeing with Trevor, not disagreeing, when he was pointing out that they were not illegal immigrants,” she continued.

“You misinterpreted that, Piers. They’re not illegal immigrants.

“What I meant by ‘soft targets’ was, you go for people where you know where they are, where they may not have the documentation which would prove that they are fully entitled to be there. I wan’t calling them illegal immigrants!”

The heated exchange did not escape the attention of those tuning in at home, who were quick to take to Twitter afterwards to choose sides:

Good Morning Britain airs on weekdays from 6am on ITV.