Piers Morgan, 55, and Susanna Reid, 49, hosted a debate on the latest news about the royal couple on Good Morning Britain. According to reports, Meghan Markle, 39, and Prince Harry are set to land a Netflix deal to star in their own reality television show documenting their lives in America. However, the outspoken journalist wasn’t going to hold back as he expressed his opinion on who could be spearheading the project since the couple stood down from royal duties.

“I think many people feel quite sad about what’s happening with Prince Harry,” the journalist began, before adding: “They remind me of an old comedy puppet duo.”

The presenter asked for a clip to be played of the late entertainer Ray Alan performing a skit with his puppet, Lord Charles.

“Meghan is out there holding him like a puppet and he’s one removed from Lord Charles – he’s the dimwit at the end.

“Just nodding along, saying whatever she tells him. It’s embarrassing and not just for him but also for his grandmother.”

Guest Ingrid Seward responded: “I’ve just written a book about his grandfather and Philip gave up everything, absolutely everything that he loved and wanted to do for the sake of the monarchy.” 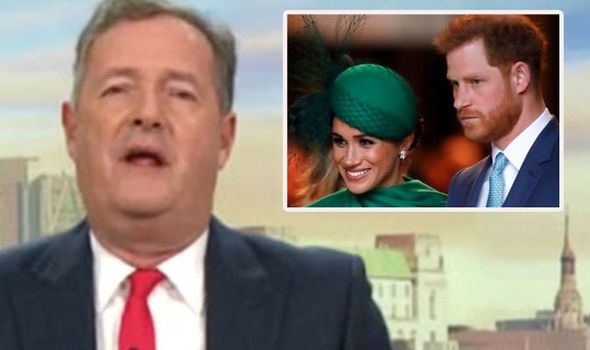 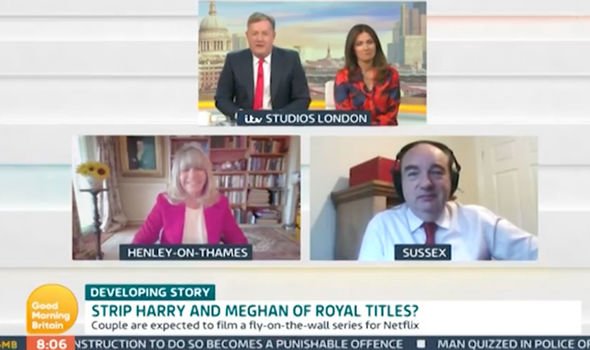 “And to support his wife who became Queen,” Ingrid continued before adding: “His view is if you don’t have a sense of duty, there is no point being a part of the monarchy.

“Harry is part of the monarchy by his birth and I think his grandfather is extremely disappointed with his lack of duty.

“Surely, Meghan could have supported him in his role as a Prince,” she continued, to which Piers then interjected.

“I don’t think she’s had any intention of doing anything other than what she has now done, which is come here and marry our favourite, handsome Prince.” 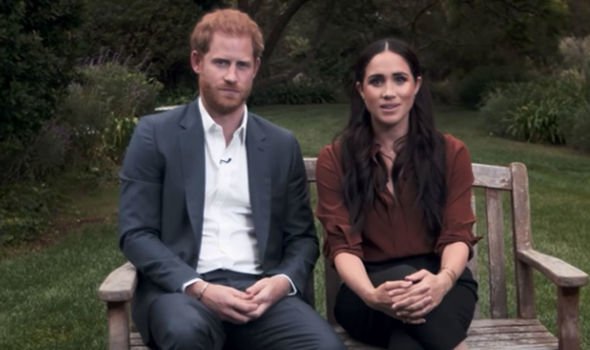 Piers added: “She then took him back to California, bought a massive mansion, got a huge TV deal and made herself one of the biggest stars in the world.

“And she’s left Harry sitting there looking like a dummy – just spouting whatever she tells him to spout.

“And it’s just a sad spectacle,” he continued, before stating “maybe he was wrong” about his stance on Meghan.

Susanna said she “didn’t think there was any point in stripping” the pair of their royal titles, despite possibly landing a Netflix deal.

Susanna has always been stoic about her stance on the royal couple, but earlier on in the programme, she seemed to change her mind.

It came as she and Piers were teasing the debate they were going to have where the latter voiced his rage over the supposed Netflix deal.

“At what point does the penny drop that [Meghan] came over here, took our Prince and now Mrs Privacy is making a 150 million (dollars) fly on the wall documentary where every part of their lives is going to be filmed,” he said.

“At what point do these scales come down from your eyes?” he asked his co-host, to which she replied: “I have reached a tipping point.”

“I am really private and I think if you are going to complain about intrusion into your privacy then having a fly on the wall series on your private life is not the message you should be sending.”

Taking to Twitter, those watching the scenes unfold voiced their opinion on the royal couple, to which one wrote: “How are they supposed to live?

“I would prefer they pay for themselves than take from us taxpayers. Just leave them alone, this discussion is stale and tired.”

Another added: “Why is GMB allowing Morgan to air pure hatred of Harry and Megan – He’s obsessed to the point of scary and it’s pathetic.”

The Daily Star’s FREE newsletter is spectacular! Sign up today for the best stories straight to your inbox Prime Minister Boris Johnson is expected to…