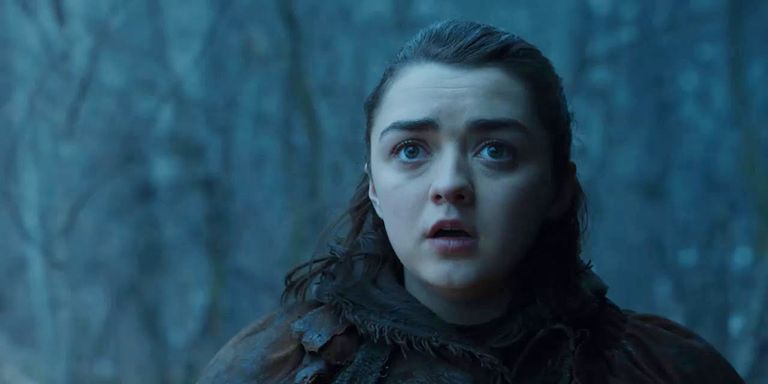 The premiere of Westworld season two answered a few questions fans have been asking since 2016, but mostly it just raised a bunch of new ones. What are drone hosts for, exactly? Why is Delos harvesting guest data, and why are they so obsessed with Peter Abernathy? How many timelines are happening at once? And what the heck is wrong with Bernard?

All intriguing mysteries, no doubt, but the most important question fans had about “Journey Into Night” was this one: Was that Nymeria the direwolf nosing around those dead bodies in Sweetwater?

When the Man in Black starts wandering around the wreckage left by the host rebellion, he sees a wolf hanging out among the dead. There are already a lot of theories about this wolf because people think it’s sentient or something, but I don’t care about that. I only care about the wolf actor in question, which does indeed look a lot like the wolf who played Nymeria in Game of Thrones:

The wolf who plays Nymeria lives in Canada and Westworld films in Utah and California, but wolves can travel, so that means nothing. (So can actors, as Maisie Williams did to film her scenes with Nymeria for season seven.)

Did you see Nymeria the direwolf on Westworld? (Via Reddit: https://t.co/4ycfR7y8sC) pic.twitter.com/b1tY79CfvR

If that is Nymeria hanging around Westworld, it could mean one of two things. The first option is nothing — there are only so many wolf actors out there and HBO probably only knows so many of that already small pool. The second option is that this means one of the Westworld parks is Westeros-themed and there are people out there paying shit tons of money to cosplay in King’s Landing. And if that’s true, then there could be a Westworld/Game of Thrones crossover episode in our future.

It’s probably not that, though. In any case, hello, wolf who looks like Nymeria! Can’t wait for you to be a symbol of something heavy-handed and extremely confusing.