Elissa Federoff’s first trip to the Oscars panned out pretty well. The Neon executive VP attended her first Academy Awards February 9 and the boutique distribution label walked away with four major wins for Bong Joon Ho’s “Parasite,” including a history-making Best Picture win. She’s still reeling from the experience, but already recognizes the value of the film’s barrier-breaking wins.

“There was just a really genuine groundswell for this film, and such enthusiasm telling me that everybody was ready for this and everybody wanted that and everybody was so moved by this moment,” Federoff said. “There is starting to feel like a genuine shift of recognition of, this isn’t just the same industry that we’ve historically seen and we want more change within it.”

Federoff is part of that change: As the head of Neon’s theatrical distribution team, she’s one of the few women who hold the top exhibition job at a studio. (At Focus Features, Lisa Bunnell serves as president of distribution, and Federoff’s second in command, senior VP of marketing and distribution Sumyi Khong Antonson, is also a woman.)

“I’m certainly in the minority, that is for sure,” Federoff said. “When I’m actually just doing my job, I never really notice or really think about it. I have a really, really great relationship with exhibition and there’s never a limitation to me getting my work done.” Still, she admitted, “I do feel it when I am in a room with other heads of studios. I really recognize that I look different, that I am different, that I’m of a younger generation. That people are like, ‘You were born in the eighties.’”

For Federoff, “Parasite” signals that change is coming to all corners of the industry, including her own. “Female voices have been historically underrepresented in film, and on the studio side, distribution is no different,” she said. “It feels amazing to be part of a tide that’s turning in our industry. I feel a groundswell around me that’s yearning for fresh new perspectives and I’m thrilled to be part of it.”

The exec has been with Neon since its January 2017 launch at Sundance, joining the upstart shingle after tenures at The Orchard, The Weinstein Company, and Oscilloscope. “I really love that I can offer something different, that I’m not the same look of everybody else out there,” Federoff said. “The old way of doing business can change and can be less, for lack of a better word, stodgy. When I say stodgy, I mean a very literal sense of the word that we have been doing the same things, and it has felt the same way, and it’s been stuffy for so long because of that. I’m just really happy to see that there’s something different out there, that we can do work differently, that it doesn’t have to be the same people making these decisions every single time, and therefore they are the same decisions every time.”

Armed with a Palme d’Or win and affection for Bong, Neon had plenty to recommend the film to the arthouse audience, but they knew it could do much more.

“We didn’t want it just being seen as a subtitled film, or an international film, or Korean cinema,” she said. “We always knew from the very beginning that this movie is an incredible cinematic experience, that this movie should be seen by everybody. It’s as a thriller, it’s a comedy, it’s a mystery, it’s phenomenal acting, all of these things that we could build an Academy campaign around for Best Picture, for Best Director. We knew that it was going to have to be sort of slow and paced and methodical, and you would have to build it.” 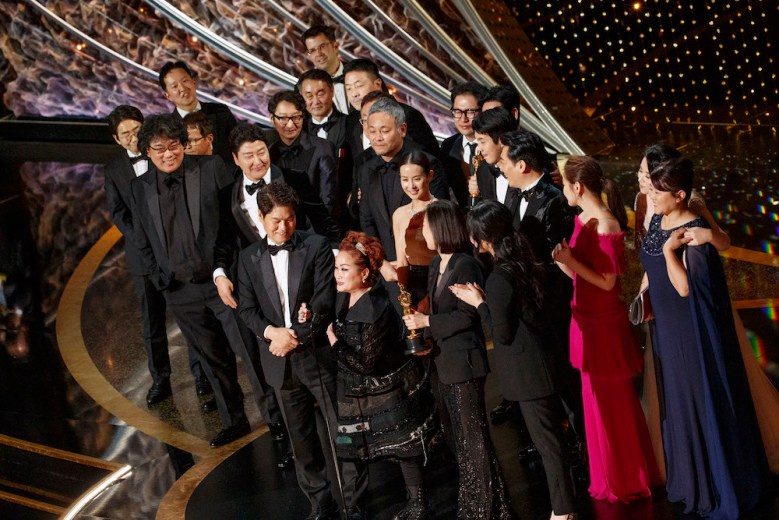 The cast and crew of “Parasite” winning Best Picture

The film has already earned $37 million in North America (internationally, it just crossed $130M), making it Neon’s highest-earning film yet. To celebrate the film’s Oscar wins, the film will add nearly 2,000 theaters this weekend, giving “Parasite” its biggest theatrical footprint in its 18th weekend.

“With a Best Picture Oscar, and all of the buzz around this film, and all the publicity and excitement, [we hope] that we’ll just get more people to realize that the one-inch barrier of subtitles is not something to be scared of,” she said. “We just want this film to be something that exposes people to that notion and allows them to expand their breadth of cinema.”

Comparing the film’s crossover success to “Crouching Tiger, Hidden Dragon,” the 2000 smash hit for Sony Pictures Classics that also won four Oscars (and a Best Picture nomination), Federoff said she wants these foreign-language successes to transcend anomaly. “I don’t want it to be something that happens every 15 years or 20 years,” she said. “I want it to be become more normalized so that it can happen every year.”

In the coming months, the Neon team will see the release of Celine Sciamma’s “Portrait of a Lady on Fire” (another Cannes favorite hitting wide release this week) and Francis Lee’s upcoming “Ammonite.” They will return to Berlin and Cannes with Federoff set on “picking up more films and working on more films by female filmmakers, by filmmakers of color, and seeing seeing more diversity behind and in front of the camera.”

Seeking diversity and inclusion on all sides of production is paramount to Federoff, who knows first hand that change comes from within. “The more people that you put in positions of power who are not the establishment, or not the current establishment, like more people of color and more women and younger people, the more those people really do recognize that they have to keep putting new people in positions of power,” Federoff said. “When we see new people making decisions at a studio level, we will see more diverse voices in cinema.”

“Parasite” is playing in (many!) theaters right now.

BBC Weather: Snow set to continue for parts of the UK Several weather warnings were issued by the Met Office earlier this week, and a…

Somalia: Loud bangs heard near SYL Hotel in Mogadishu However the move has been condemned by a number of analysts with one Democrat politician describing…