In the 1991 comedy “L.A. Story,” local weatherman Steve Martin felt safe in prerecording some TV forecasts so he could take time off in the summer. Similarly, this week’s VOD report could have been filed last week with little fear of inaccuracy. Netflix’s $200 million Russo Bros. original “The Gray Man” immediately hit #1 on the streamer’s in-house chart after its online debut July 22, a week after the film’s nominal theatrical release.

Even at #1, a Netflix chart can tell only a small part of the story. A major new English-language new original is the default #1 more often than not. Last week’s #1 film was its contemporary update of Jane Austen’s “Persuasion”; this week it’s #4. Usually Netflix can live with that, but “The Gray Man” is its most expensive feature to date. Even a second week at #1 would be unusual; “Senior Year” with Rebel Wilson is its only original movie to achieve that since March.

To its credit, despite only spending one week at #1, “The Man from Toronto” (a Sony acquisition) is #6 in its second month on the site. The Kevin Hart-Woody Harrelson comedy, which received terrible reviews, stuck around longer than another Netflix original, “Hustle” starring Adam Sandler — the streamer’s best-reviewed live-action original this year.

One new Netflix chart entry this week is “Umma” starring Sandra Oh, a Sony theatrical horror release from March. Without its own streamer, Sony increasingly looks to Netflix as the studio’s alternative. “Uncharted” will debut there on August 19. 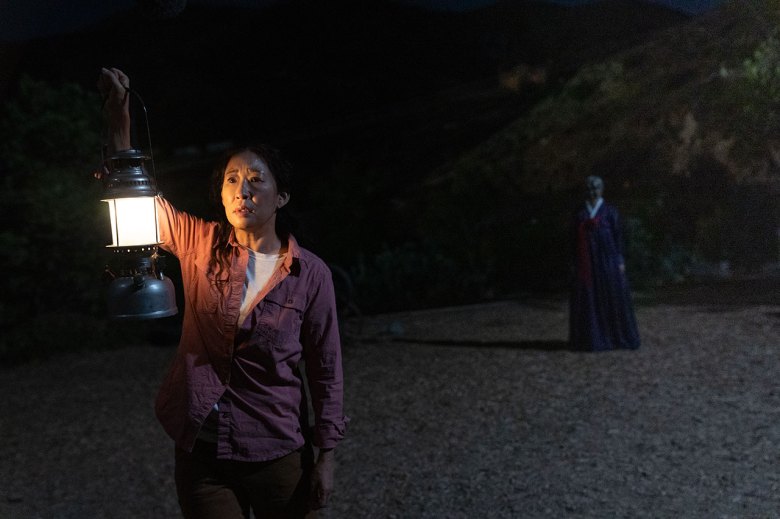 All three VOD charts again are led by “Jurassic World: Dominion” and “The Black Phone,” both Universal titles at #1 and #2, respectively. Based on their opening weekend grosses of under $50 million, both participate in the studio’s early release plan with a $19.99 price point. Of note: Based on its very good opening gross of $44 million, “Nope” will likely make its PVOD debut after two more weekends.

Still TBD for PVOD are dates for top films “Top Gun: Maverick” (Paramount) and “Elvis” (Warner Bros.). Both have strong holds (each fell less than 20 percent over the weekend) and they could be delayed until after Labor Day.

In the absence of much else new, the sole debut title is the extended director’s cut of “Justice League” (Warner Bros., $14.99). All four hours of it is #3 at Vudu (aided by its higher price on the revenue-ranking site); it also showed up at #10 on iTunes.

Beyond that, nearly everything else on the charts repeats from last week. “Everything Everywhere All at Once” (A24/$4.99) and the reduced-price “The Bad Guys” (Universal/$5.99) joined “Jurassic” and “Phone” on all three lists.

iTunes and Google Play rank films daily by number of transactions. These are the listings for July 25. Distributors listed are current rights owners.

Most viewed, current ranking on Netflix’s daily chart on Monday, July 25. Originals include both Netflix-produced and -acquired titles it initially presents in the U.S. Netflix publishes its own weekly top 10 on Tuesdays based on time viewed.