On a cool day, with the mist wreathing its way around the dozens of rocky fingers at its peak, it's easy to imagine becoming lost on Hanging Rock, the strange volcanic outcrop near Woodend, about 90 minutes north-west of Melbourne's CBD.

But on this particular day, there's little chance of that. The sun is shining, literally and figuratively, on the TV adaptation of Picnic at Hanging Rock, and electric golf buggies are darting up and down the pathways, ferrying cast, crew and equipment to and from the hilly patch of bushland where Canadian director Larysa Kondracki is shooting a scene of a young woman running, jumping and screaming at the otherworldly horror of it all. 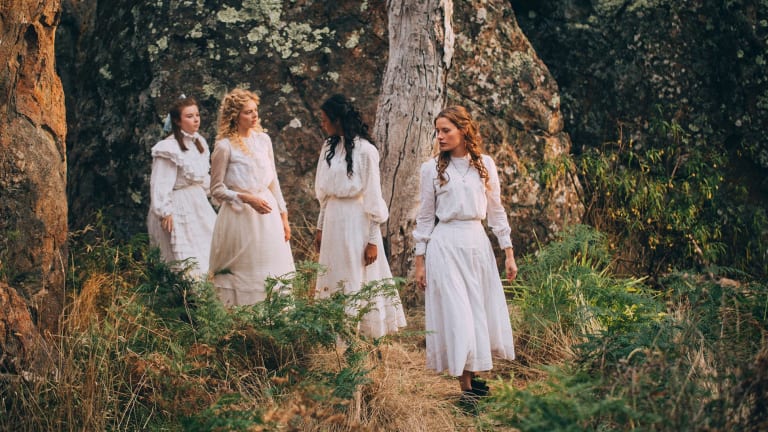 The ADG also claimed that "none of our highly talented female internationally-produced television directors currently working in Australia were approached" for the job.

Long after the dust has settled, Jo Porter, director of drama for Fremantle Media Australia, is still a little bruised by the backlash.

"We wanted a woman first, and someone who would have the capacity to attract a big-name lead," she says. "We had a big budget and expectations it would sell very well overseas, so it needed someone who would make sense to an overseas broadcaster. That could have been an Australian but the ones who fitted weren't available – the irony is they were all working overseas."

In terms of those stated goals, the strategy would appear to have worked. Game of Thrones star Natalie Dormer signed on to play Mrs Appleyard, the headmistress of the girls' finishing school at the heart of the story, while Amazon Prime snapped up the rights in the US and the BBC did likewise for Britain. 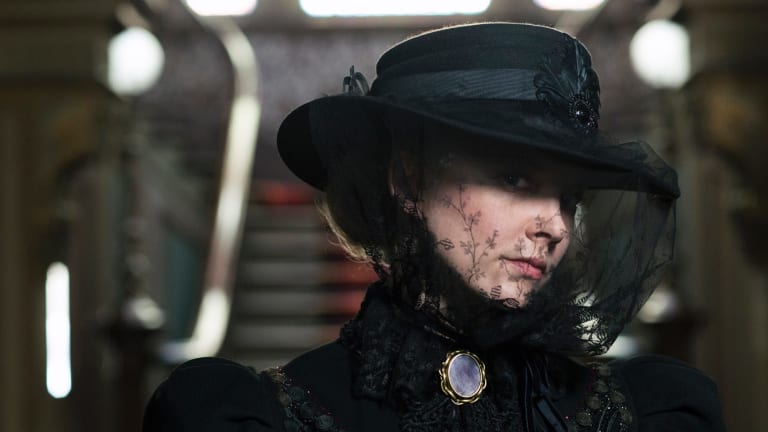 Natalie Dormer as Mrs Appleyard in Picnic at Hanging Rock.

Kondracki is credited as "establishing director" and "creative consultant", which means she is responsible for the look of the series. And that look might best be described as a slightly hallucinatory fever dream – which is perhaps as appropriate as it is surprising, given that Lindsay wrote her story in a two-week burst fuelled by a series of night visions.

"We wanted that tone to be set," says Porter, who also serves as producer on the series (stepping in when the original producer was taken ill). "It was a way to differentiate it from the film." 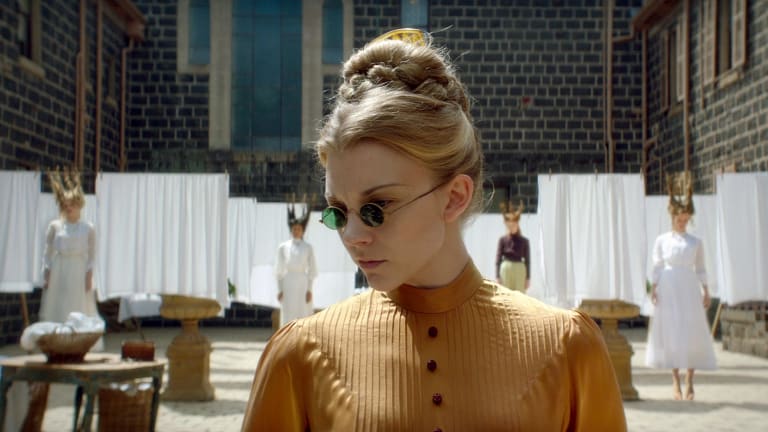 Canadian director Larysa Kondracki has infused the series with a kind of fever dream quality.

Ah yes, the film. Peter Weir's 1975 version of the story is one of the most important pieces of filmmaking in this country's history, having done more than any other to bring the so-called "Australian New Wave" to worldwide attention. But it is unquestionably a product of a very different time – and, crucially, of a very male mindset.

"I was definitely familiar with Peter Weir's film before working on the project and I don't think you have to be Australian to appreciate the brilliance of that film," says Kondracki. 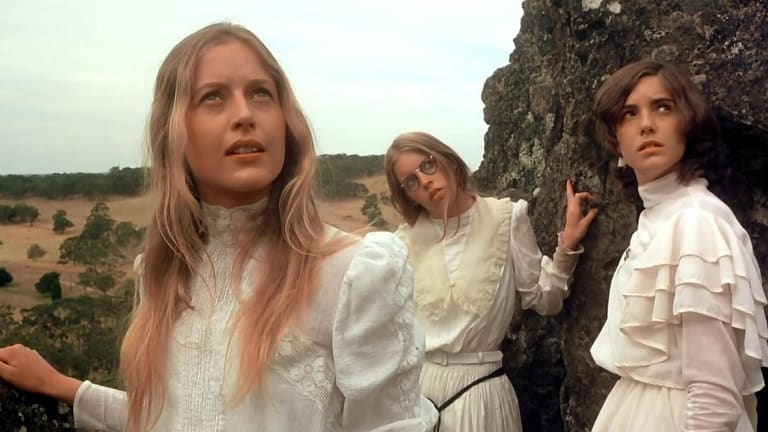 The big difference is putting it through a feminist lens. We've tried to make these much more empowered women.

"For me, that is a canonical film that holds a very firm place in cinematic history. But Fremantle assured me this wasn't going to be a remake of Weir's film but rather would be going back to Joan Lindsey's novel and convinced me to at least read the scripts [by Bea Christian and Alice Addison]. And, once I did that I became completely immersed into how the story had been re-imagined … there were so many elements that I felt drawn right away – things like telling the story from the perspective of the girls and what that conversation would allow visually, as well as this being a meditation on time and our place in it.

"That said, I also knew that telling this story would be just as much about paying homage to the source material and none of us took that lightly." 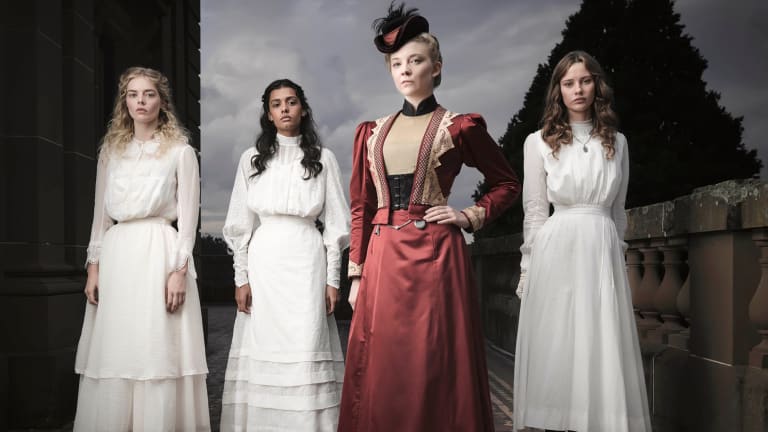 That's a sentiment echoed by Michael Rymer. "When I first got the script, I thought, 'I don't want to touch Peter Weir, he's my hero'," he admits. "I guess I was a bit cynical about this, but five or 10 pages into the script I thought, 'This is not at all what I was expecting. OK, I'm in'." 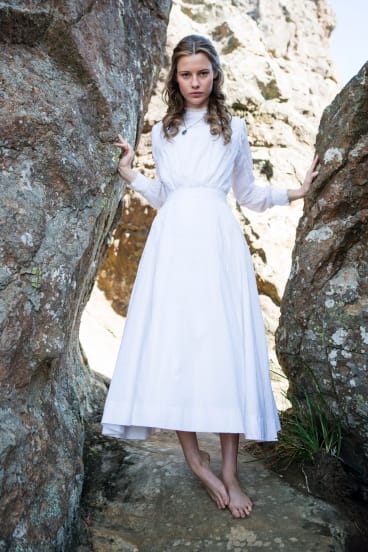 Lily Sullivan as Miranda in Picnic at Hanging Rock.

"the big difference [between film and series] is putting it through a feminist lens. Weir specifically pulled [English photographer] David Hamilton references in terms of the visual language he was using, and that is a very male gaze, deliberately. We've tried to change the gaze, in depictions of nudity in particular, and in making these much more empowered women.

"It's the turn of the century, the nation is coming into its own identity, and they're trying to define their own identity, not just be at a finishing school being turned out as nice little daughters of empire."

For Lily Sullivan, who plays Miranda Reid, being part of such a female-heavy production was as invigorating as it was unusual.

"I didn't realise I hadn't experienced being in a mainly female-dominated cast until I had," she says. "It was so beautiful. It felt so different because usually you're the sole female character. And it was the first time I'd worked with a female director."

Sullivan's Miranda is a country girl, a bit of a tomboy, an adventurous spirit who can hold her own in most situations. She could hardly be more different to the Miranda of the film, as played by Anne Louise Lambert, whose ethereal beauty launched many an adolescent dream back in the day.

"Playing such an iconic role was terrifying," admits Sullivan, because "everyone has a predetermined idea of who Miranda is and what she looks like. But the more I dug into it the more I lost the iconic role and just saw a young girl who wanted to get out, and didn't accept the time she was in."

For Rymer, that recasting of the Picnic story and its characters is the justification enough for a fresh take on a story he admits he would never have thought of revisiting of his own accord.

"I wouldn't have thought of doing it. It's much more complex and intense, we're being introduced to a much more feminine world, what goes on between schoolgirls trapped in this hot-house environment," he says.

And as for the "controversial" foreign director? "Larysa has made choices I would never have made because I have a certain set of assumptions about what happens in Australia and what Australia looks like, and she has none of those," he says.

"It is Australia, but it's not recognisable as the Australia you're familiar with. It's a slightly fantastic world, but it's a strong, muscular approach to the story.

"It's not David Hamilton, that's for sure."

WHAT Picnic at Hanging Rock

WHEN All six episodes streaming on Foxtel from May 6