Innuendoes are nothing new on This Morning, but Phillip Schofield might just have dropped his best one yet.

Qualified social worker Judi Love and relationship expert Annabelle Knight were on hand to air their views on the subject, with both of them fully aware of what Phil was doing when he ended the segment by saying “this has obviously started a mass debate”. 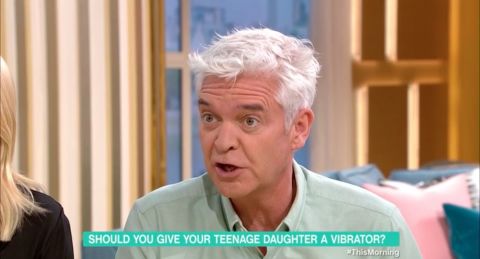 Holly Willoughby might not have giggled and Phil remained stoic throughout, but viewers watching at home were loving the casual innuendo.

Before the innuendo was dropped though, some viewers watching at home were uncomfortable with the debate opening the show, despite the fact that only scientific words were used.

This Morning airs weekdays at 10.30am on ITV.

Are YOU among the world’s richest one per cent? Study reveals how big a fortune is required to rank amongst the very wealthiest people in…

REVIEWTim Minchin Apart / Together with WASOKings Park, Perth Festival★★★★ Tim Minchin has yet to disappoint, even as his own disappointment shines through in some…