This Morning presenters Holly Willoughby and Phillip Schofield made a rare Friday morning appearance on the show to make a big announcement.

They’re done on the show… well, for the summer at least.

The pair announced today (July 13) that it would be their last show for a while as they both take the summer off until September. 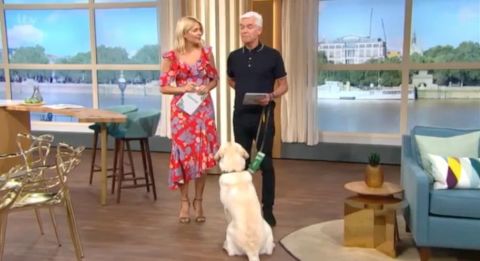 “It’s our last show before Eamonn [Holmes] and Ruth Langsford take over for the summer from Monday,” Holly revealed.

“Definitely in holiday mode now. We are taking a little bit of time off for the summer,” they added. We’re not jealous in the slightest, you guys.

Last day of term excitement here on @thismorning ?? … dress by @cmeocollective #hwstyle?✨ thanks to my gorgeous and clever girls @angiesmithstudio @patsyoneillmakeup and @cilerpeksah_hairstylist for always being brilliant… love you gals! ❤️

Last day of term excitement here on @thismorning 💃🏻 … dress by @cmeocollective #hwstyle💁✨ thanks to my gorgeous and clever girls @angiesmithstudio @patsyoneillmakeup and @cilerpeksah_hairstylist for always being brilliant… love you gals! ❤️

Before the show, Holly revealed on social media that it was her “last day of term”.

Fans flocked to social media and said they will be missed over the summer break:

Phil was seen frying bacon at the start of the show, though later reassured viewers that the pig was alive and well.

Marcus had earlier had a 100% track record with predicting England games – though it just wasn’t to be for the semi-final.

This Morning airs on weekdays from 10.30am on ITV.