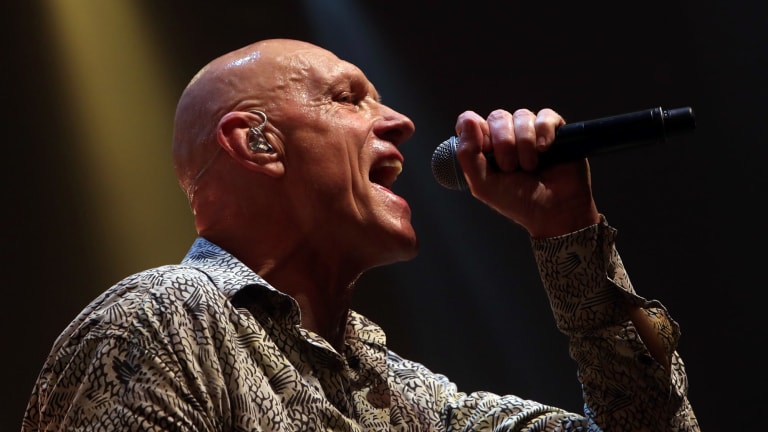 After witnessing Peter Garrett adapt to the cycles of compromise and concession that make up the life of a Canberra politician, it's strange and faintly eerie to return to the sight of him dominating the stage during his early years as a rock star.

His notoriously jerky moves go far beyond bad dancing. It's as if some runaway android has taken charge of the show and is in grave danger of blowing its circuitry.

The director, Ray Argall, worked with Garrett and Midnight Oil during those years. He made the band's music videos and concert films and this documentary has backstage footage that has never found its way on screen before.

It concentrates on 1984 as that was the year Garrett made his first foray into politics after the new Nuclear Disarmament Party made overtures. As a result, he stood as their NSW candidate in their bid for Senate seats in the federal election.

From Midnight Oil's birth in the early 1970s, the band had woven a passion for environmentalism and Indigenous affairs into the songs written by Garrett and the band's founding members, drummer Rob Hirst and guitarist and keyboard player Jim Moginie, and the fans loved them for it.

Even so, the demands on Garrett, the aspiring politician, made life hard for all of them in 1984 as he campaigned by day and performed by night. Yet they remained remarkably sanguine.

Most backstage studies of rock musicians at work include a tantrum or two. Not this one. It seems they quickly resigned themselves to the upheavals caused by Garrett's Canberra ambitions, modestly leaving him to be the band's principal message bearer.

At the same time, the Oils were clearly relieved when his Senate campaign failed. It meant they could capitalise on the momentum they had already achieved by tapping into the energies of a still growing anti-nuclear movement.

By then, their music was really reflecting their sharpened political focus. A visit to an Aboriginal settlement in northern Queensland worked itself into the themes aired in their big hit, Red Sails in the Sunset.

They recorded it in Tokyo, where they met some of Japan's nuclear survivors, an experience that also helped shape the album. And it was soon climbing to the top of the Australian charts, cementing its success by finding a place in Billboard's top 200. Their concert schedule that year was just as frenetic as Garrett's political life.

All this is noted but underplayed. I wanted sharper insights into the band's relationship with American and British record company executives nervous about its refusal to tailor song lyrics to the tastes of international audiences unfamiliar with Australian references.

And Argall dwells only briefly on the extent of Hirst's influence on the band's style. Moginie and his fellow guitarist Martin Rotsey also refer wistfully to the fact it was important for them to go on playing together during the band's fallow years after Garrett did go to Canberra in 2002.

But you get little sense of their group dynamics. It's a very tame take on a band whose appeal has always lain in its ability to combine raw, pounding rhythms with an air of passionate, and often angry, conviction.

Argall admits he let the music dictate the pace of the narrative, which means he doesn't spend a lot of time on exposition. You're left to assemble their story yourself from the band's beginnings on Sydney's northern beaches where Hirst and Moginie first got together.

Garrett joined them in Sydney in 1973 after leaving Canberra, where he had been at university, and the earliest footage gives us a glimpse of a gangly young man with a lot of blonde hair bouncing around the stage in a modified version of what would become his trademark routine.

What the film does best is to demonstrate the strength of the bond between the band and its audience. These are not swooning fans. They're banner-waving acolytes joyful in their discovery of musicians whose work crystallises their beliefs as well as their emotions.