The Men in Black franchise returns showing Molly (Tessa Thompson), a believer of aliens trying to hilariously join the secret organization. She is smart, dedicated, and has a laser focus. Once she makes it in as Agent M she also manages to join Agent H’s (Chris Hemsworth) mission who is managed by High T (Liam Neeson.) They have an interesting dynamic given he isn’t about following the roles and more about passion. 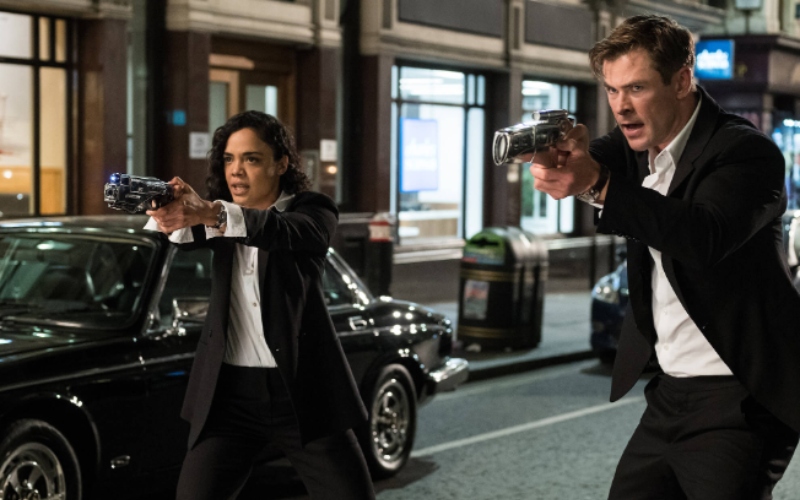 F. Gary Gary, who previously directed The Fate of the Furious, once again shows he knows his way around directing an action film. Men in Black: International has multiple characters with questionable motives and beautiful locations as settings for big car chases and explosive battles.

Thompson and Hemsworth have already proven to be great partners in Thor: Ragnork. Their chemistry pops once again with Hemsworth playing a Bond-like character who will go outside the box like using his sexuality to get out of a jam. Agent M seems to admire his position in the organization, but can’t agree with his methods. A pleasant surprise in this movie comes from another memorable duo.

Larry and Laurent Bourgeois use their physicality in an amazing way

Larry and Laurent Bourgeois play aliens who really throw a wrench into Agent H and Agent M’s plans. Some audience members might recognize them as dancers who worked with Beyoncé Knowles and were most recently seen on stage with her for Homecoming: A Film by Beyoncé. They don’t have much dialogue for their roles, but they use their physicality in an amazing way. Of course, there is CGI used for their scenes, yet their own back-bending moves really add to their fight sequences.

The movie does really take its time and clocks in at nearly two hours. That’s because it tries to stand on its own and reintroduce this world to the audience so people don’t need to see the previous movies to get it. In a way it works and it feels like Agent H is Hermoine Granger stumbling onto Hogwarts for the first time.

The movie really takes it time

However, if you have seen the previous movies it might feel slow. It’s also in no rush to introduce characters like Pawny (voiced by Kumail Nanjiani.) I have to admit I wasn’t thrilled with Pawny’s introduction because the movie doesn’t really need a cute sidekick like other movies, but the foul-mouthed alien who is instantly devoted to Agent M is endearing in the end.

Men in Black: International does have some feminist moments throughout the movie. Thompson has already addressed that when asked about if the title “Men in Black” will change. The movie is clever with its approach to this by having multiple female characters with a strong point of view interact with each other.

Ultimately it’s a straightforward summer action movie. It does its job of restarting a franchise with these new characters for a new generation. Hopefully, the world of the franchise will be given a little more complexity after this fun introduction.

Men in Black: International will be released in theaters on June 14, 2019.