The world was temporarily shifted from its axis when the original Great British Bake Off gang was torn apart in 2016, but how much have things really changed between them?

Erm no, not really.

Despite a little dig in her post-Bake Off statement about not “going with the dough”, it seems former co-host Mel Giedroyc is still more than happy to meet up with judge Paul Hollywood – even if he is a defector.

Appearing on yesterday’s (April 25) Lorraine, Mel revealed that Paul and Mary Berry are still supportive of her new projects, which may or may not have made us feel a little teary.

Mel, who’s currently appearing in a production of Much Ado About Nothing, told Lorraine: “[Mary] came to the show last night… I did catch her eye in one of the scenes, which was a little bit alarming.

Proving that she and Paul are also still good friends too, Mel added: “And Paul texted me out of the blue three days ago, which was really nice, to say good luck for the play.”

Sure, we might be huge fans of the new Bake Off line-up, but is anyone else pining for a BBC reunion?

Mel and Sue Perkins’ recent venture on the Beeb, The Generation Game, hasn’t been as successful as Bake Off, with the hosts forced to defend its disappointing critical reception. 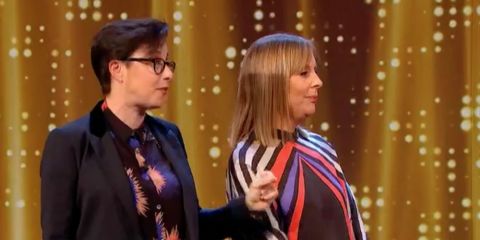 On the prospect of a new series, Mel said recently: “Our thought is, if we’re asked to do more, we’ll be absolutely delighted to. And we just want to make it as good as we possibly can.

“If we get to do more we just have to try and make it our own, give it our own voice.”

IVANKA Trump and Jared Kushner were all smiles despite going for a sweaty jog in the Miami heat. Donald Trump's daughter, 39, and her husband…

A DEADLY snake found the perfect hiding place which made it look practically invisible. A mind-boggling photo of the sneaky reptile has left Facebook users…