It hasn’t taken very long for Dani Dyer to become a brand new national treasure – so it’s no surprise that Love Island viewers didn’t take kindly when Danny Dyer’s daughter got upset in a recent episode of the ITV2 show.

Dani and Jack, who recently made their romance official, have been separated into different villas for the last few days.

And even with a influx of new boys and girls, the adorable couple have remained faithful to each other, with Jack even sleeping outside to be alone.

But producers sent Dani a clip of Jack’s reaction to when his ex-girlfriend Ellie walked into the second villa, where he said: “Oh my god, that’s the bird I was seeing before I was in here.”

Dani instantly burst into tears, with the other girls rushing to comfort her as she cried.

But viewers have slammed the move, saying the clip was taken out of context as Jack and Ellie have shown no interest in each other in the house.

Some have even accused the show of ’emotional cruelty’ towards 21-year-old Dani, and playing “mind games” with her.

Digital Spy has reached out to both Love Island and Ofcom for comment.

Jack recently confessed his love for Dani in a chat with pal Adam.

“I keep picturing Dani’s face and I want to see it. I really do,” he said. “I actually love. I’m not going to lie to you. I love Dani Dyer. I actually love her.” 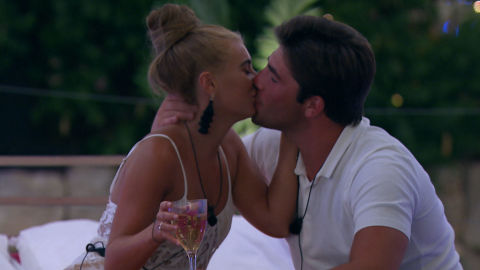 Meanwhile, Dani refused to take part in a raunchy challenge that asked them to kiss other Islanders.