It was hard to be at the Cannes Film Festival this year and not run into Léa Seydoux. The French actress starred in two well-received movies at this year’s festival, David Cronenberg’s dystopian “Crimes of the Future” and Mia Hansen-Løve’s romantic drama “One Fine Morning,” and also attended a lively 75th-anniversary event for the festival. Throughout the two-week event, she was spotted at restaurants and parties around town, blending into the scene right on schedule.

Cannes has become a kind of ritual for Seydoux, with the exception of last year, when a positive COVID test nixed her trip even though she had three films in competition: “The French Dispatch,” “The Story of My Wife,” and Bruno Dumont’s “France.” Even when circumstances kept her from coming here, audiences couldn’t avoid Seydoux on the big screen.

“Every French actor comes here,” Seydoux said in an interview a few blocks from the Croisette this week. “It’s like a club.”

But the 36-year-old actress remembers what it was like before she became a member. As a teenager, she came to Cannes with some acting friends who co-starred in a short film, and the group crashed at a nunnery outside of the main area. “I was just here with my crowd,” she said. “I didn’t realize what Cannes was.” Now, returning to the festival for the first time in years, she fits right in. “Some people told me that last year was sleepy,” she said. “It feels like it has come back to what it was, no?”

But Seydoux herself may be a part of that return. Cannes welcomes a blend of arthouse and commercial cinema alike, a combination that Seydoux has embodied over the past decade. She and Adèle Exarchopoulos shared a Palme d’Or with their director, Abdellatif Kechiche, for “Blue is the Warmest Color” in 2013. While the actresses later criticized Kechiche for his behavior on the set of the sexually explicit film, the project only further elevated the profile of a star who had by then already appeared in everything from “Mission: Impossible – Ghost Protocol” to “Midnight in Paris.”

Seydoux is used to juggling many different movie worlds. She recalled working on Swiss director Ursula Meier’s tender sibling drama “Sister” when she was called back for reshoots on “Mission Impossible” by the studio. “It was just like two different worlds,” she said. Her two films at Cannes this year presented an even weirder challenge: She was halfway through playing a sensitive single mother in “One Fine Morning” when the shoot take a break between seasons and went to the set of “Crimes of the Future,” in which she plays a futuristic performance artist who performs surgery onstage. “That was crazy,” she said, “but it’s also why I love this job. You have to adapt yourself all the time.” 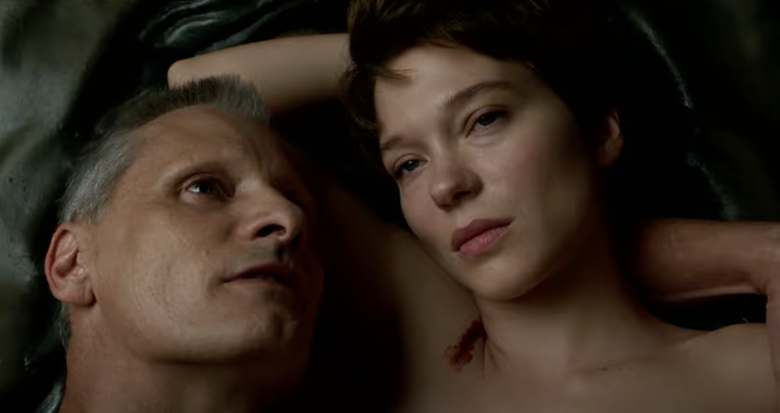 “Crimes of the Future”

There were several stages to that process on the Cronenberg film, made from a screenplay the filmmaker wrote over 20 years ago. When the project first came to her, she was actually in talks to play the supporting role of an organ registry agent that ultimately went to Kristen Stewart. The central character of Caprice, the artist who removes artificial organs from her performance and romantic partner Saul (Viggo Mortensen), went to Natalie Portman.

But when Portman dropped out due to scheduling conflicts with “Thor: Love and Thunder,” Seydoux got the bigger part. Now, it’s hard to imagine the movie without her: As Caprice, Seydoux is a passionate creative who brings an emotional foundation to Cronenberg’s enigmatic look at the future of physicality. The ideas come hard and fast in “Crimes of the Future,” to the point where even Seydoux admitted she was wrestling with them. “I didn’t understand it,” she said of the script. “I didn’t know what I was doing. But I had to make the choice and I think that worked.”

As for “One Fine Morning” — which won the Europa Cinemas Award at this year’s festival and was acquired by Sony Pictures Classics — the opportunity to work with one of France’s most acclaimed rising directors was a no-brainer. When Mia Hansen-Løve sent her the script, Seydoux said, she found an easy way into the character, who develops a new relationship with a married man in tandem with caring for her dying father.

“I liked the parallel between desire and death with her father’s disease — it was very interesting to have those two very strong experiences happening at the same time,” Seydoux said. “She’s a very normal woman. She’s like not a fantasy or an object of desire. She has a job, she’s a mother, and we feel that she’s struggling in life. I was very touched by that and felt that I could bring a certain level of emotion.”

Like many French actors, Seydoux said she was director-oriented when sorting out her offers, but that hasn’t precluded blockbuster opportunities. In 2015, she was cast as love interest Belladona Boudreaux in the pre-Disney Fox production of X-Men spin-off “Gambit,” which Channing Tatum was set to star and direct. Tatum later left the project over creative differences with the studio and has said that the experience left him frustrated for years.

Seydoux said she enjoyed the version of the script that was sent to her. “The script was really good,” she said. “It had some funny bits in it, but they wanted to make more of a comedy.” She did a screen test for the part, she said, because it marked such a departure from her other work. “I feel that in America people have more imagination,” she said. “I have been offered films very very far from what I’ve done and I’m like, ‘Oh. Interesting.’ I love to feel that I can adapt myself. For me, that’s very exotic.” “Blue Is The Warmest Color”

At Cannes, the complicated legacy of “Blue is the Warmest Color” continues to come up in conversations, and she said she was fine with that. “I don’t have a problem with the vision of the film,” she said. “It’s more about his technique. He was more than tough and manipulative. I think he could’ve made the same film but with respect. I think that the movie is really respectful, and I’m fine with the sex scenes, and I do love sex scenes in cinema. Sex is part of life. It’s not a bad word. I’m offended by violence, not sex.”

As if to underscore that point, one of Seydoux’s upcoming projects is a new adaptation of the erotic novel “Emmanuelle” with “Happening” director Audrey Diwan attached to direct. The story is built around a woman’s sexual fantasies. “It’s going to be a portrait of a woman of our generation that I feel that has never really been told, in the sense that female sexuality seen through a woman’s eyes has never been really explored yet,” Seydoux said. “Audrey and I are from the same generation, so I know we are on the same page of what we want to say about a modern woman.” That project will shoot next year; in the meantime, she’s preparing to act in Bertrand Bonello’s sci-fi thriller “The Beast” opposite George MacKay. “I make the films that I would want to watch,” she said. “It’s the only way I choose.”

She declined to list other filmmakers who might come her way next. “I never thought I’d be working with all these directors,” she said. “This is how I want to continue my journey.”

NEON releases “Crimes of the Future” in the U.S. on June 3, 2022. “One Fine Morning” was acquired by Sony Pictures Classics at the Cannes Film Festival but does not have a release date yet.