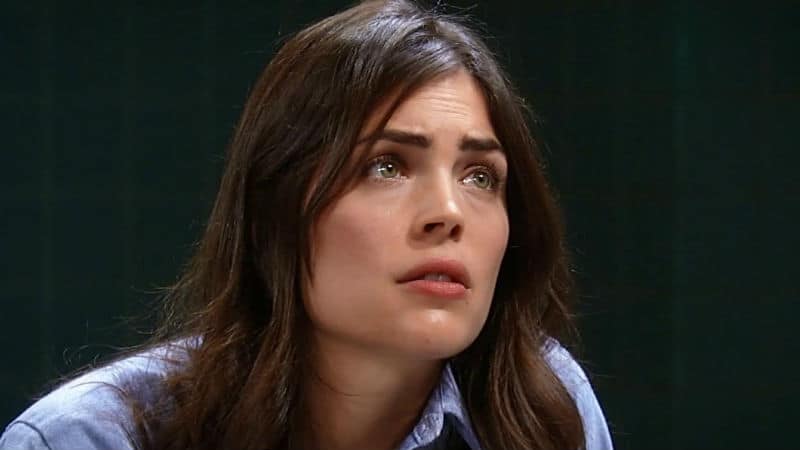 General Hospital fans catch their first glimpse of Britt “Britch” Westbourne on Monday, October 29, 2018, when Kelly Thiebaud reprises her role. She first appeared in 2012, and with her family up in the air and her bestie having trouble, it is an excellent time for her to return to Port Charles!

It’s a sure bet that the brunette beauty will come back to town like a hurricane making a hard landing. Her past antics crossed the line on a regular basis, and at heart, she has dangerous and devious blood running through her veins. Her mom is Dr. Liesl Obrecht (Kathleen Gati) and dad is sinister Cesar Faison (Anders Hove)!

Britt made an immediate impression when she arrived at General Hospital, falling for widower and fellow doctor, Patrick Drake. His lovely wife Robin (Kimberly McCullough) was presumed dead, although we later learned she was being held against her will and kept from her family.

In a devious move, she arranged for one of the staff nurses to care for Patrick’s young daughter so she could have her way with Patrick. Instead, the nurse and Patrick got jiggy with it!

She attempted to blackmail to get her way, but that didn’t work out. Worse behavior followed, with her claiming to be pregnant with Patrick’s baby (not true), it was, in fact, a stolen embryo baby (long story!)

After a series of devilish antics, Britt departed town with Faison. She returned in 2015 and 2017, each time for a brief appearance.

The details surrounding her return have been kept under lock and key up to this point. Is she in prison? Is she rehabilitated? Will she come back to help Brad (Parry Shen) resolve his baby snatching mess?

Of course, she knows a thing or two about baby drama, so be sure to tune in and find out what the Britch is up to now!