Fans of The Inbetweeners have been waiting with bated breath to find out if the cast will ever reunite and actor James Buckley has taken full advantage of that excitement.

The actors – Buckley (Jay), Simon Bird (Will), Blake Harrison (Neil) and Joe Thomas (Simon) – and creators enjoyed a reunion meal which Buckley was keen to document on Twitter, and he couldn’t help but tease the show’s fans.

He captioned the photo “Inbetweeners series 4 pre production meal” and followers weren’t sure just how seriously they should take it.

One thing’s for sure, they all wanted the news to be true whether it is or not (and it’s most likely not):

Sadly, Buckley himself has previously denied that the show will return, saying that the actors are too old for their roles now.

“Obviously what I get from everyone, every day is, ‘Can you do some more Inbetweeners?’,” he said.

“And unfortunately it’s just like physically impossible. Because we’re old! I can’t believe that’s even still a discussion. Because people go, ‘You could do some more, can’t you?’ 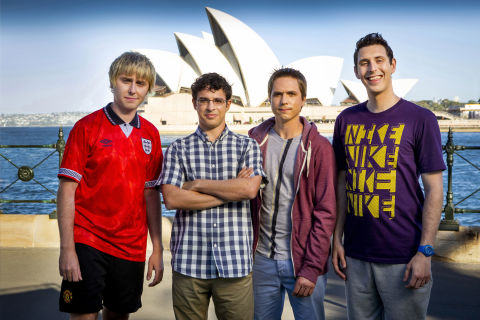 His former co-star Harrison has also spoken out against the idea of a remake, saying that it would struggle without Inbetweeners creators Damon Beesley and Iain Morris.

“What I would say is that I’m sure that the four of us as actors are replaceable. What you can’t replace is Damon Beesley and Iain Morris.

“Those guys… they wrote something really special, in that it just hit the right note at the right time.”