The show is a revival of the production which aired between 2012 and 2014, The Bletchley Circle. It was originally axed but has been given a new lease of life by BritBox – a US-only streaming service. 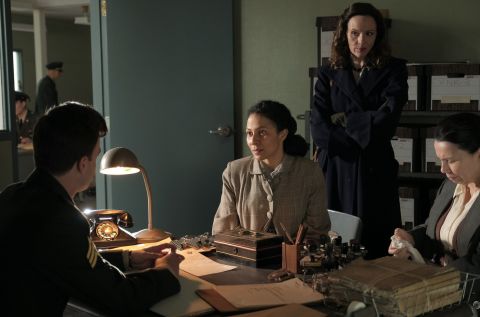 Viewers at home were impressed by the show’s first episode, voicing their positivity online in support of its portrayal of strong and arse-kicking women.

The Bletchley Circle: San Francisco follows the trials and tribulations of four women in the mid-1950s. They are extraordinarily gifted individuals whose talents lie in decryption and pattern recognition.

Millie Harcourt and Jean McBrian travel to California to team up with two American codebreakers, Hailey Yarner and Iris Bearden, in the hope of tracking down a serial killer from their war days who’s just resurfaced.

Fresh from the first episode’s cliffhanger, fans further reflected on the show’s return to our screens.

Sophie Rundle, one of the original show’s actresses, has previously admitted her disappointment after The Bletchley Circle wasn’t renewed for a third series.

“It was a real shame because we would’ve loved to have come back,” she shared. “[But] in the climate that we’re in at the moment, it’s really hard to get shows recommissioned. Doing a second series was a complete bonus – we only thought we were doing a one-off drama.”

We wonder if Sophie tuned in for tonight’s big return?

The Bletchley Circle: San Fransisco returns next Wednesday (August 1) at 9pm on ITV.