Good Morning Britain was discussing the race report findings today and when Lisa Nandy MP joined Susanna Reid and Ranvir Singh, she was asked whether she thinks institutional racism still exists. It comes after the government’s report which was commissioned in the wake of the Black Lives Matter protests rejected suggestions that Britain is still an institutionally racist country.

The 264-page report concludes the UK has become a “more open society” where children from a variety of ethnic communities are performing well, or substantially better than white pupils in compulsory education.

Findings also argued the issues around race and racism are “becoming less important” and in some cases, are not a significant factor behind explaining disparities.

However, race advisers have said Britain is not “a post-racial society” and “overt and outright racism still persists” in the country, especially online.

When Labour’s Shadow Secretary of State for Foreign and Commonwealth Affairs was asked her thoughts on the findings, she said she thought the report “sounded deeply confused”. 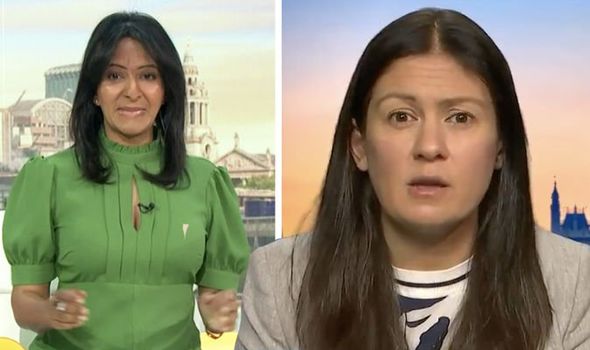 Singh said: You did use the term structural racism – we had the author on earlier saying people use that term ‘willy-nilly’ and ‘don’t really know what it means’.

“But you still then believe it exists because you’ve used the term there,” the presenter continued.

Nandy commented: “My dad was one of the authors of the race relations act many decades ago where they first defined institutional racism in law.

“It is different from everyday racism; it’s where institutions have practices where they are wittingly or unwittingly discriminate people on the basis of characteristics that they can’t do anything about.”

Singh reiterated: “And you still think that exists today which goes completely against the headline of the report.

“It sounds deeply confused to me and it’s about why we were sceptical about another report in the first place,” the MP added.