Incredibles 2 writer and director Brad Bird has revealed why he hasn’t aged Mr and Mrs Incredible and their three children.

The sequel picks up right where 2004’s The Incredibles ended – with Violet still a teenager, Dash still a 10-year-old, and so on…

Bird told EW that he wants “to capture people and how their powers connected with the way they are at a certain age and their roles in the family”.

“So very quickly I realised that I didn’t care that much about the powers. What I did care about was that they were a family – and that was a very liberating idea.”

He explained: “Men were expected to be strong, so I made the dad super strong. Mothers are pulled in 20 different directions at once, so I had her be elastic. Teenage girls are defensive and shy and insecure, so I made Violet invisible and gave her force fields.

“Ten-year-olds are energy balls, so I made Dash super fast. And babies are unknown! So Jack-Jack either has no powers, or every power in the universe, because babies are all about possibility.

“So, if you age them up, then they’re just powers. And that’s not interesting.”

Further explaining his decision, Bird continued: “As long as people’s voices are the same, the characters don’t need to age.

“I mean, just ask the people on The Simpsons. You can do it in animation, just as long as the voices don’t sound older.” 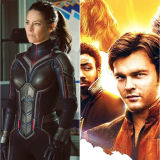 Incredibles 2 will be released on June 15 in the US and July 13 in the UK.